Nier: Automata was a fascinating journey. It was an existentialist dream made up of various game genres, set in a ruined version of earth thousands of years in the future. For players on PC like myself, it was the first entry point into the world of Nier – strange, a bit emo, and packed with an earnest exploration of some of the philosophical questions games inadvertently raise, and often ignore.

After some time with the repackaged prequel, Nier Replicant ver.1.22474487139…, which is due out April 23 on Steam, I’m struck by the similarities between it and Automata. Much of the style that makes Automata such a striking mood piece is present in Replicant, although the overall effect is muted as some of the genre conventions kicking around when it was initially released in 2010 have largely become extinct.

Nier Replicant sets you up as a young man searching for a cure for his younger sister, who is afflicted by a mysterious and fatal disease called the Black Scrawl. You set out from your village to seek out the Sealed Verses, passing through a variety of apocalyptic regions that feel small and sparse by modern standards.

To avoid spoiling anything for anyone who hasn’t played the original, Square Enix has placed some strict limitations on the elements of the game we can discuss ahead of launch. So don’t worry – we won’t be discussing any of the story (including the unrecoverable weapon stories) here. 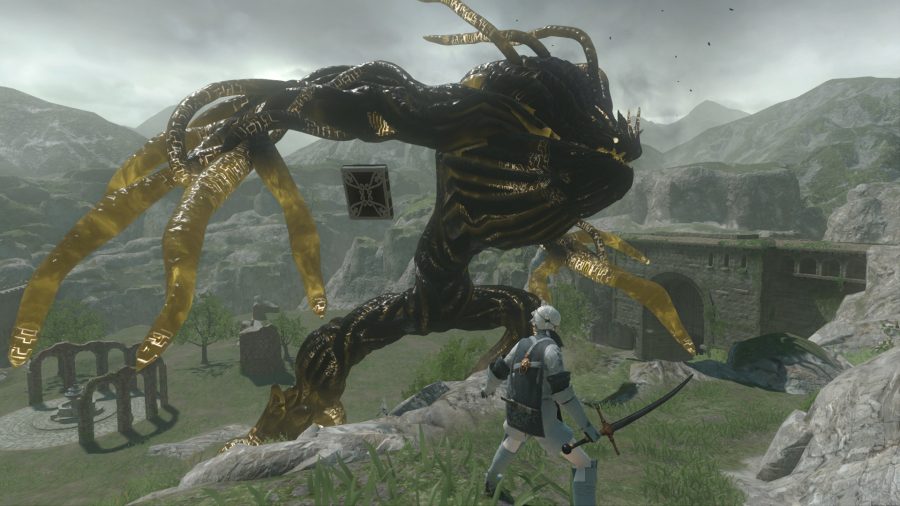 One area we can talk about is the Junk Heap, a ruined industrial facility – or possibly an ancient military base – where you go to search for a way to strengthen your weapons. While there, you find two boys whose mother has gone searching for salvage deep within the pile and has failed to return after a week.

Replicant is missing Platinum Games’ input when it comes to combat

Like other dungeons in Nier, the Junk Heap plays with camera angle conventions, shifting from the third-person action of the open-world zones to more fixed camera positions that make you feel hemmed into the environment. You hop from battling waves of boxy robots in claustrophobic arena brawls, to zooming around in a rail cart where you use the magic powers supplied by your sentient book – the super-intelligent and annoyingly sarcastic Grimoire Weiss – to blast away at floating enemies in a balletic shmup. Yep, it’s very Nier.

The boss of the dungeon is Defense System Geppetto, who you encounter on a circular platform at the heart of the Junk Heap. Geppetto appears as a massive robotic face with a pair of hands, which you can beat by dodging and waiting for it to open its mouth – lock-on and hurl some bombs into Geppetto’s gullet. 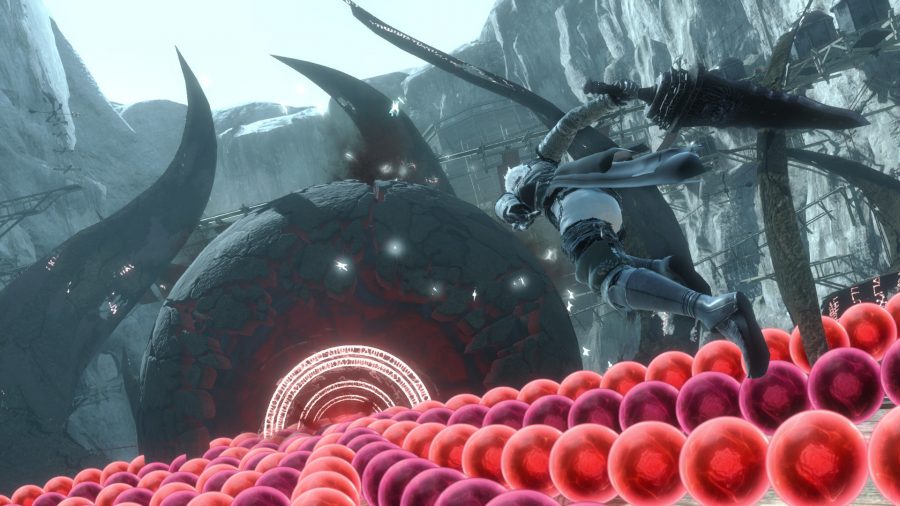 Another early boss encounter occurs at the Aerie, a village built into the cliffs north of your village. Here you fight Hook, a massive gelatinous lizard animated by dark magic. In both battles, Nier Replicant blends character-action gameplay with ideas borrowed from top-down shoot ’em ups and 2D platformers, and while neither battle is particularly taxing, the constant jumping between perspectives and gameplay conventions feels loose and imprecise.

It’s common to take damage not because of a recognisable error, but instead due to restrictive camera angles. These pain points are eased somewhat by the fact that neither boss puts up much resistance – they feel more like opportunities for players to familiarise themselves with magical abilities and melee combos.

You fight Hook alongside a new companion, Kainé. She’s a swordswoman who makes a point of swearing as frequently as possible and, for reasons left unexplained, wears only a complicated negligee and heels into battle. If there’s some metatextual reason for this, it’s lost on me; it feels like a gratuitous addition to an otherwise earnest and almost naively sweet game about being kind to people and beating up demons. 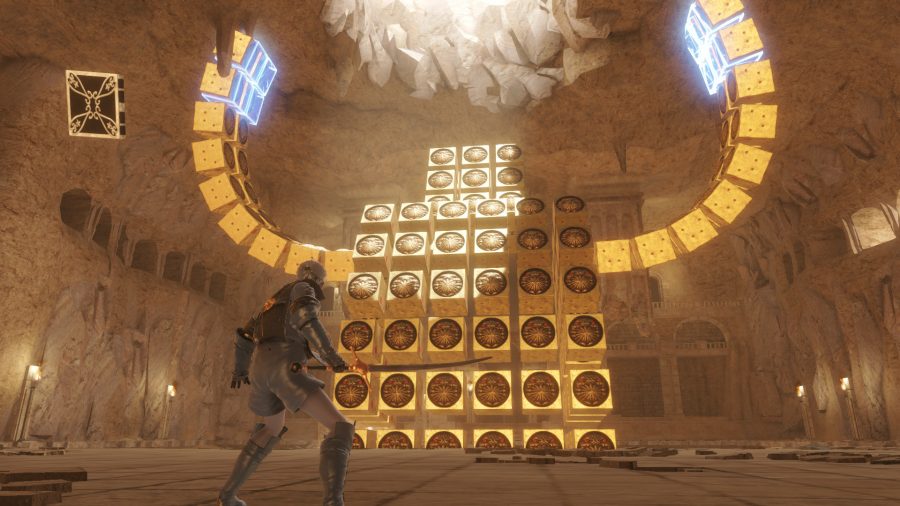 Roughly halfway through the preview Nier Replicant jumps forward in time, showcasing some of the new weapons and magic types available later in the game. Enemies you met before are significantly stronger, making each brawl more demanding. Playing on normal difficulty, I don’t ever feel as though Nier is pushing back against me all that much. Although the button-mashing, combo-driven action opens up significantly once you reach the second half of the story, it’s apparent that Replicant is missing Platinum Games’ input when it comes to combat.

Nier Replicant is an odd game, and for someone who has only ever played Automata, there’s no way to really know what to expect after the preview – only the promise of world-shifting reveals and twists to come. Fans who loved the original will likely appreciate the refreshed visuals (although, as with Automata, there’s certainly nothing ground-breaking in the graphical presentation here) and re-recorded soundtrack. At the very least, Replicant is a chance to see some of the ideas that were more fully fleshed out in Automata in their earlier, sometimes embryonic forms.