If you’re lucky, you’ll get to ride a frog this Famicom Friday

While the Famicom saw release in the middle of 1983, most of North America wouldn’t see the NES until sometime in 1986. There’s actually a good few games that came out before the NES landed that never really got localized, such as Challenger, Chack’n Pop, and Antarctic Adventure. Being on the wrong side of The Legend of Zelda‘s and Metroid’s releases, most are cyclical arcade jaunts, but some are still worthwhile places to visit.

On this Famicom Friday, we’ll be taking a look at one of these primordial games that would go on to spawn its own franchise. Perhaps not a series as landmark as Ganbare Goemon, but one that has a place in gaming’s history. Japanese gaming history, anyway, we didn’t get too many of them over on this side of the pond. 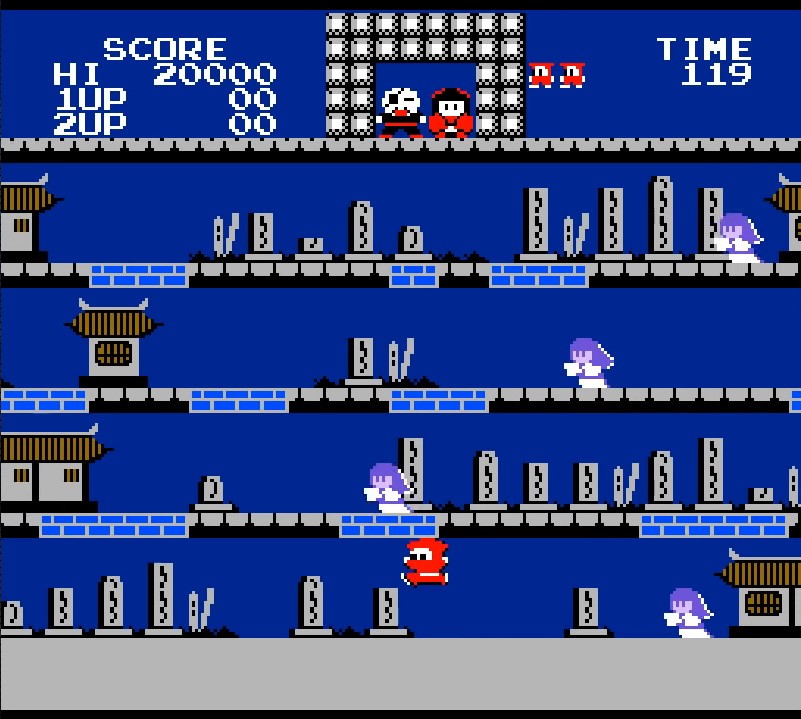 Jaleco’s Jajamaru-Kun series is almost a classic. It began with a port of UPL’s Ninja-Kun for the Famicom, after which Jaleco lifted the title character for their own set of games on the console. The series would continue on, mutating heavily over the years, gradually shifting genres and reinventing itself multiple times before sputtering out with one final 3D title for the Playstation and Saturn and punching its ticket to the early-3D graveyard.

It all started in earnest with the Famicom’s Ninja Jajamaru-Kun, which is an absolute mouthful to say. While not actually based on an arcade title, the game borrows heavily from the experience. There are few similarities linking it to the original Ninja-Kun. Each level takes place on a four-story field, with the objective being to eliminate all enemies by hitting them with giant shuriken. 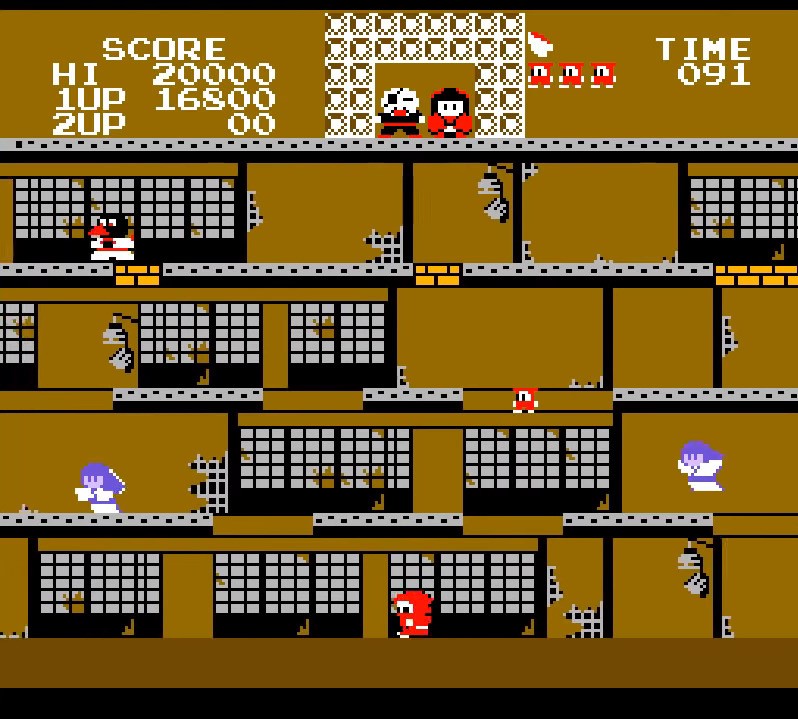 Gameplay is pretty simple. You ascend floors by bashing blocks with your head and jumping through, similar to Ice Climbers. Most levels have a singular strong enemy on the top floor, and it can sometimes be pretty challenging to get the jump on them. You can also stun enemies by hopping on their heads, though this can feel somewhat inconsistent with the jumping being so stiff and the hit detection being so wonky.

Power-ups are hidden in some of the floor blocks, allowing you to throw shuriken further, move faster, or gain extra lives. If you reach four lives in a single game or collect three distinct power-ups, Jajamaru’s pet frog, Gamapa-Kun, appears and gives you the opportunity to gobble up all the enemies. It’s a cool ability, but power-ups drop randomly, so it’s difficult to strategize for when it will happen. 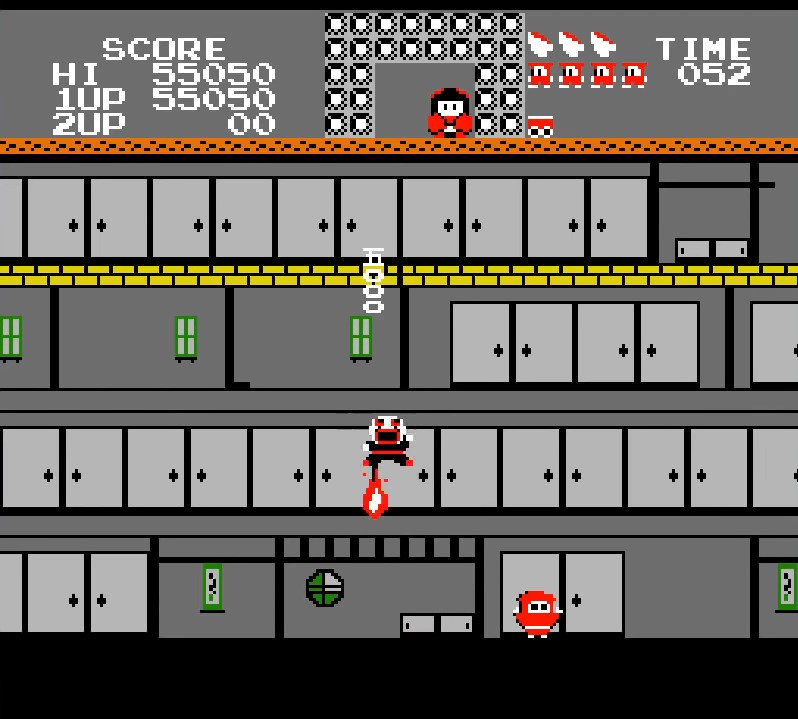 That’s all there really is to the game. It goes for about 21 levels before it starts repeating itself from the beginning. It’s a pretty typical arcade framework that can entertain for an afternoon unless you’re into pursuing the high score. However, I feel that the random nature of the game’s power-ups disqualify it from being a good score-chasing game since luck is too much of a factor. What do I know, though? I’ve never met a kill screen in my life.

Despite its short lifespan and simple gameplay, I really enjoy Ninja Jajamaru-Kun. It’s a nice, light snack that I pop into the Famicom every once and a while. It spawned a series that would continue on the Famicom in different configurations, including an RPG. It enjoyed something of a remake on the Wonderswan titled Ganso Jajamaru-Kun, which added a bit of progression to the game through the use of a world map. It’s also stupid difficult, and I haven’t figured out how to get very far. 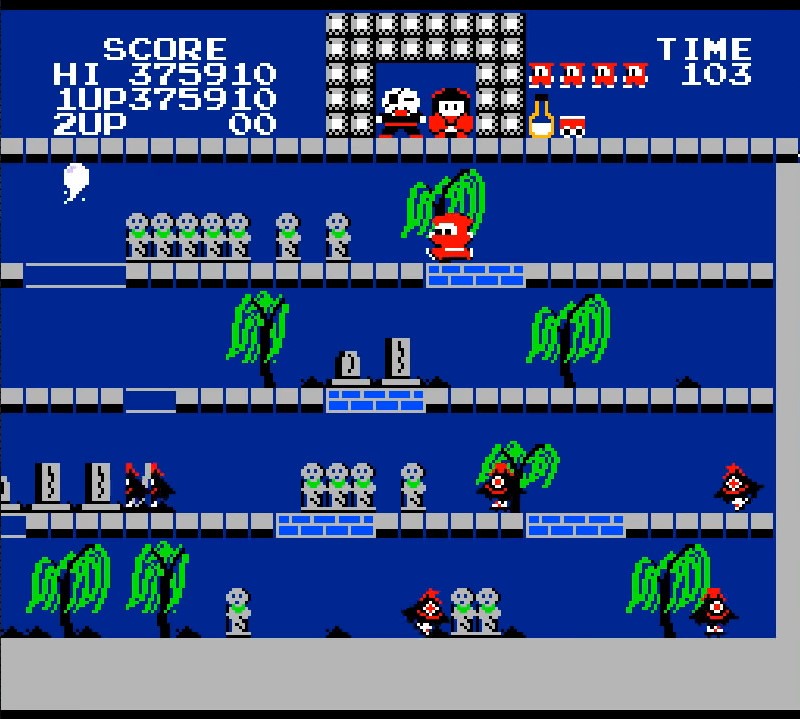 Surprisingly, Ninja Jajamaru-Kun actually did see a North American release on the Wii’s Virtual Console in 2007. It, unfortunately, did not see a re-release on either the 3DS or Wii U iterations of the service, but there’s always a chance that it could wind up on Nintendo’s current NES library available to Online subscribers.

Or perhaps not, because Japan also received the game as part of a Ninja Jajamaru-Kun Collection currently out on Switch and PS4. With luck, we may see a localization of it, but you can always import it.

The Japanese language doesn’t play a major role in this game. Between level title-cards give the names of the enemies in kanji, but that’s about it. It’s extremely simple to play without knowing the language. If that is still too confusing, there is a fan translation to clear up those title-cards.