You know, there’s always been a bit of a stigma around the sport of wrestling. No, I’m not talking about dudes playing Olympic grab-ass in loincloths. I’m talking about the real-deal, no-holds-barred action of professional wrestling. While I’m not a huge fan of the current on-air product, I’ve always been fascinated with the old school era of the sport. It was about damn time we got the chance to play that out in game form. RetroMania Wrestling enters the ring from the hard cam side and aims to bring that dream to fruition. Is it strong enough to go for a full “Broadway,” or will it end up as more of a squash match?

When “retro” actually appears in the name of a title, it’s fair to assume that it will be a throwback to eras long past. RetroMania Wrestling is no exception to that rule. With a visual presentation that clocks in somewhere between 16- and 32-bit, the hand-drawn animated sprites are a delightful realization of the sport in this brutal brawler. You’ll feel like you’re back in the arcade, and that’s not just because you’re mashing your fingers into bloody stumps against unforgivingly brutal face buttons.

Considering there have so rarely been grappling titles released in the last decade that weren’t WWE branded, the NWA-backed RetroMania Wrestling is a curious and unique experience to be sure. As such, the lineup is a hodgepodge of independent and non-WWE talent (à la New Japan, AEW, and Impact), accompanied by a few bigger names from the past. Current NWA champion Nick Aldis headlines the roster, along with the likes of Colt Cabana, Matt Cardona (formerly Zach Ryder), Zach Sabre Jr., and Brian Myers (formerly Curt Hawkins). Older names like Tommy Dreamer, Nikita Koloff, and the entire Blue World Order also make the trip from gorilla position. Rounding out the deck is the prominent inclusion of the legendary Road Warriors. Both Hawk and Animal are accounted for in their full pixelated glory, with bloodshed in their minds and malice in their hearts.

If you’re looking for variety in the squared circle, this is a solid place to start. Between all of the different match types and permutations in RetroMania Wrestling, there are over 50 different ways to play. Hell, they’ve even gone as far as adding two separate single-player campaigns, just for good measure. There are options to play with lineups as small as 1v1 and as large as 4v4, with a Royal Rumble for all 16 roster members to boot. On top of that, there are also match stipulations such as a steel cage, falls count anywhere, elimination timers, tornado tag, and fatal four-way. 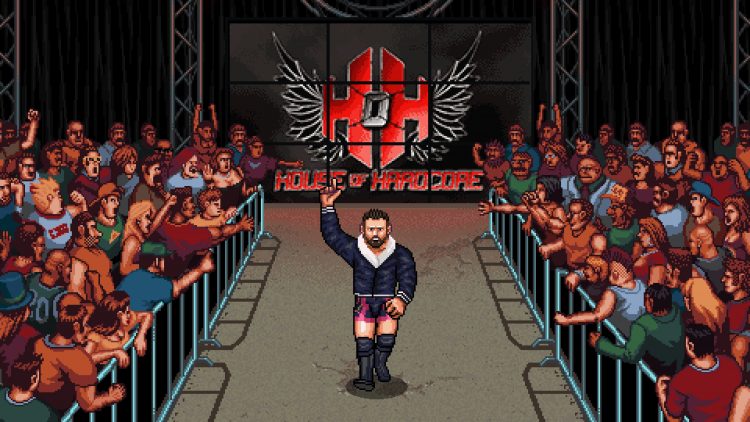 Each of the campaigns revolve around a single character. In the 10 Pounds of Gold mode, the narrative orbits the current NWA workhorse, Nick Aldis. Though you don’t actually control Aldis during the narrative, the storyline fixates on the chase for his belt, the eventual title defenses, and heavily features his likeness throughout. He even gets the chance to spit a couple of brief promos too, which I honestly wasn’t expecting.

The primary campaign consists of a story mode, where players lace up the boots of a “sports entertainer,” that looks staggeringly similar to WWE’s John Morrison (otherwise known as Johnny Impact or Johnny Mundo on the indies). Sure, he’s actually named “Johnny Retro” in the script, but who are they trying to kid? If this hasn’t already landed them a handful of calls from legal teams in Stamford, Connecticut, I would genuinely be stunned. 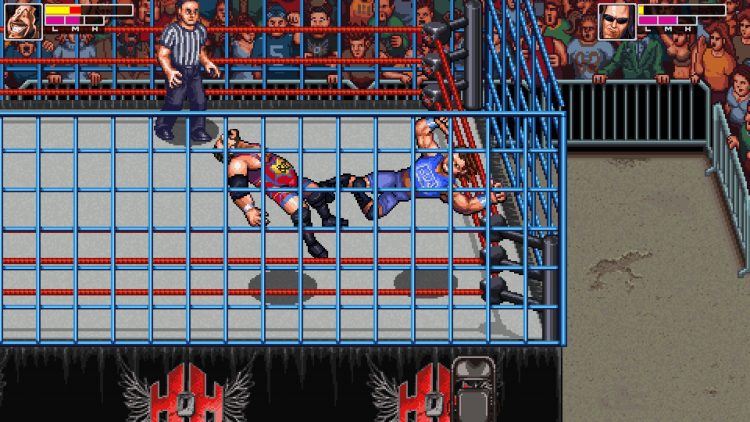 Plot wise, RetroMania Wrestling’s story mode picks up with “Mr. Retro” while he’s on the mend from a horrific injury, suffered at the hands of Zach Sabre, Jr. Cleverly enough, the main gameplay tutorial is also nestled into this recovery storyline, as his ring rust is a convenient explanation for the excessive hand-holding that takes place early on. As he begins to regain his strength and confidence, Johnny starts to venture out into the indie scene, teaming up with numerous other stars along the way.

Where 10 Pounds of Gold and the standard story mode differ dramatically are the diametrically opposing storytelling approaches used throughout the parallel narratives. While you are attempting to climb the NWA ranks, the extent of the story is only what you would’ve seen on a week of standard wrestling television programming. The match-to-match progression plays out much like an extended angle, shown from the perspective of the home viewer. However, in the dedicated story mode, there’s more of an inside-baseball approach to the entire arc. So many figures from across the wrestling landscape make appearances, some as more subtle winks, while others slug you right square between the eyes. Additionally, the story follows the backstage goings-on in Johnny Retro’s life, which in turn allows for some player choice to drive match assignments. 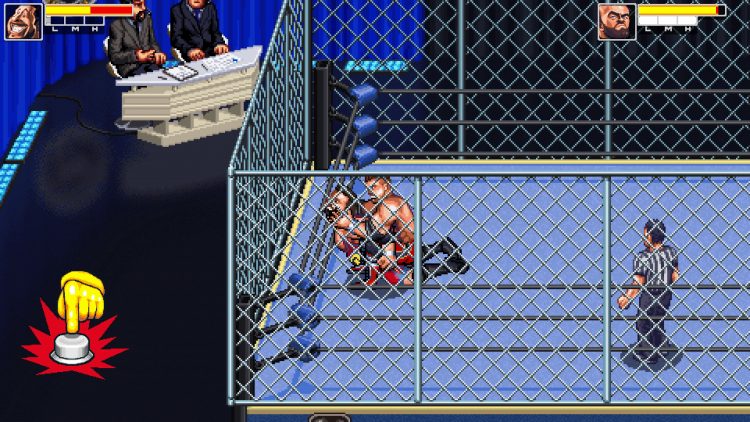 Despite the presentation being both gorgeous and nostalgic, RetroMania Wrestling’s controls somewhat undermine the quality of the overall experience. For one, inputs require very specific timing, which can take quite a while to get under your fingers. You can choose from light, medium, and strong style (no pun intended) attacks, each one controlled with a face button on the gamepad. When you’re not physically holding onto the opposition, these three move types can be used freely.

Once you’ve locked up with a combatant, that is where things start to get a bit tricky. Most times, these rest holds require an excessive amount of button mashing to gain the upper hand and dictate the next move. After taking control of the hold, you can then use the same corresponding light, medium, and strong face buttons, along with the eight different directional positions on the D-pad’s axis, to launch up to 24 different attacks and/or combos. Where things get tricky is the momentum meter, which indicates what moves can be performed out of a hold. If you attempt to perform an attack without adequate momentum, the move is then automatically reversed by your adversary. 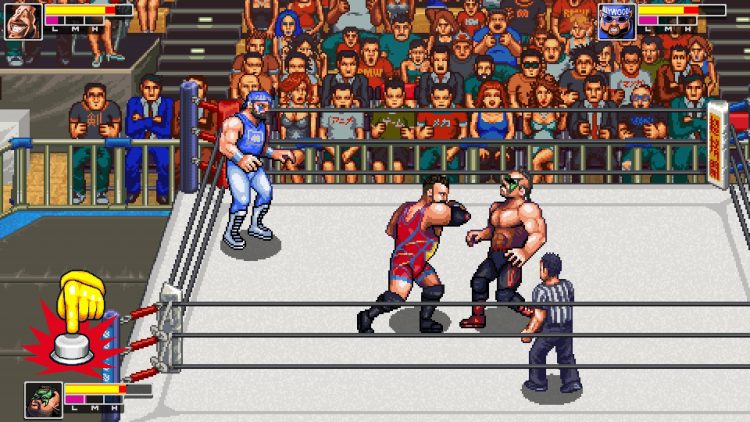 Even the process of locking up in RetroMania Wrestling has its quirks, as every hold (unless a tag-team special) can only happen between two athletes. This primarily comes into play in match types where there are uneven numbers in the ring. Due to the very 1v1-centric battle mechanics, if you’re the third, fifth, or seventh wheel, or participating in a Royal Rumble, there’s a good chance you’ll end up in far too many swing-and-miss scenarios. You can attempt to spam an attack as much as you’d like, but far too frequently, strikes harmlessly pass through the target due to your wrestler already being actively engaged with another fighter.

Trying to land a move on the run, either by striking someone who’s been tossed into the ropes, or attempting to propel yourself at full speed across the ring, is nigh impossible to line up with any level of consistency. Due to the lack of visual depth, there were countless times where I attempted to spear someone into next week, only to miss them by millimeters and end up flat on my ass, looking at the lights. Even after several hours of pounding my head against the wall, my success rate was still somewhere around 30%, which is borderline inexcusable. 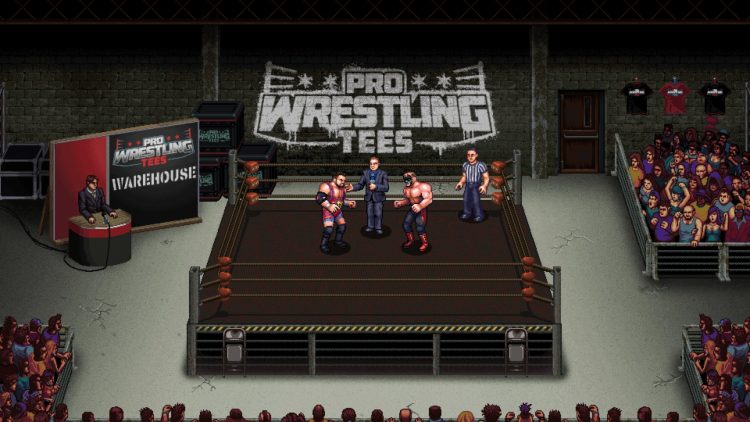 My single biggest gripe with RetroMania Wrestling is something that rears its ugly head anytime there are more than a half dozen people in the ring simultaneously. Once again due to the lack of three-dimensional depth, as soon as the canvas starts to fill up, everything goes to hell in a handbasket. It quickly becomes impossible to determine where you are and what you’re doing, let alone be competitive in a match. If you’re attempting the eight-person local multiplayer, may God have mercy on your poor GPU, because the action will become visually impossible to parse, damn-near immediately.

Though RetroMania Wrestling was an intriguing trip down memory lane, being married to the old school design choices of previous eras, ultimately erodes away at the overall experience. Don’t get me wrong, there’s still plenty of fun to be found in the squared circle. However, expect the enjoyment to be laced with equal parts frustration, irritation, and in the case of larger match lineups, downright confusion. Unless some big changes are in the works down the road, these matches will remain firmly entrenched in the mid-card for the foreseeable future.