Sad news, Anthem fans. Anthem Next, the multiplayer game’s reboot which has been in the works at BioWare for some time, has been scrapped. Earlier this month, reports indicated that EA would be making a decision about the 2019 action-RPG game’s fate that same week, and now its developers have published a blog post explaining that they’ve “made the difficult decision” to stop work on Anthem going forward. However, its live service “as it exists today” will continue to be supported.

“In the spirit of transparency and closure we wanted to share that we’ve made the difficult decision to stop our new development work on Anthem (AKA Anthem Next),” studio director of BioWare Austin Christian Dailey’s blog post reads. “We will, however, continue to keep the Anthem live service running as it exists today”

The post goes on to explain that, since the game launched almost exactly two years ago, the devs have worked hard to “continually improve” Anthem through a series of new updates. It also highlights the shift towards the end of the same year to begin work on “a more fundamental restructure of the game”.

“2020 was a year unlike any other, however,” Dailey explains, “and while we continue to make progress against all our game projects at BioWare, working from home during the pandemic has had an impact on our productivity, and not everything we had planned as a studio before COVID-19 can be accomplished without putting undue stress on our teams.

“I know this will be disappointing to the community of Anthem players who have been excited to see the improvements we’ve been working on. It’s also disappointing for the team who were doing brilliant work,” the post continues. 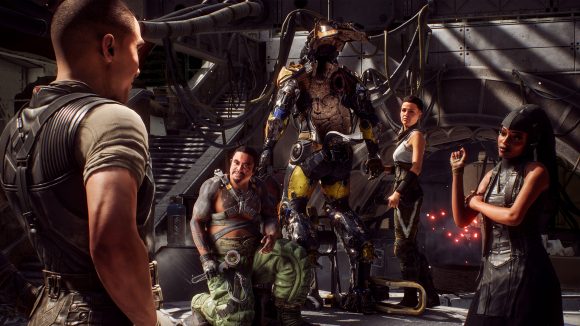 “Game development is hard. Decisions like these are not easy,” Dailey adds, explaining that going forward the devs will need to “laser focus” their efforts and strengthen the other upcoming PC games BioWare has in the works – that is, Dragon Age 4, and the next Mass Effect – alongside updates for the MMORPG Star Wars: The Old Republic.

Dailey signs off with a ‘thank you’ to Anthem’s community for its “passion and creativity”, adding that not only did its input help steer the game thus far, but that fans’ “kindness and encouragement were much needed last year”.

Given Anthem’s troubled launch and struggle to gain traction since, today’s news about its fate is perhaps unsurprising though sad to see. It seems, with so many highly popular options now on the table, the online multiplayer space is a tough nut to crack, with Anthem Next’s cancellation following the shutdown of Amazon’s Crucible and announcement that Ninja Theory’s Bleeding Edge won’t be getting any more content updates in recent months.

BioWare said last year that it was going “back to the drawing board” to work on Anthem’s reboot, and that its reinvention was going to be a long process. With the significant effects of the ongoing pandemic thrown into the mix, it’s not difficult to see how Anthem might have become too big a mountain to tackle, especially in these times. The good news is the game isn’t gone for good – it’ll still be running in its current state, so core fans can continue to dive in for a round of Freelancing.