Impulse Control is one of the mission stories you can start in Hitman 3‘s Chongqing level. Your main target here is Hush, which means you can complete this prior to doing Certainty Principle. Here’s our guide.

Note: For more information, check out our Hitman 3 Chongqing/End of an Era guide, as well as our guides and features hub. Likewise, please be reminded that this guide contains spoilers.

Follow the marker and incapacitate the homeless man when his friends aren’t looking. Grab his disguise (“The Downtrodden”) and pick up the two flyers. He drops one and there’s another on the nearby crate (“Last Resort”).

Note: If you keep the homeless man’s clothes, you can complete an assassination challenge later. 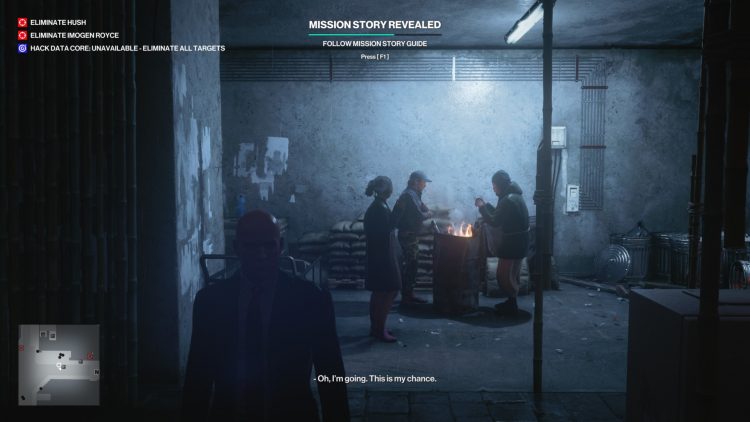 Access the panel in the storage room and input “2552” to open the door. Check the boxes along the stairwell as you climb up to find the cowboy bust. 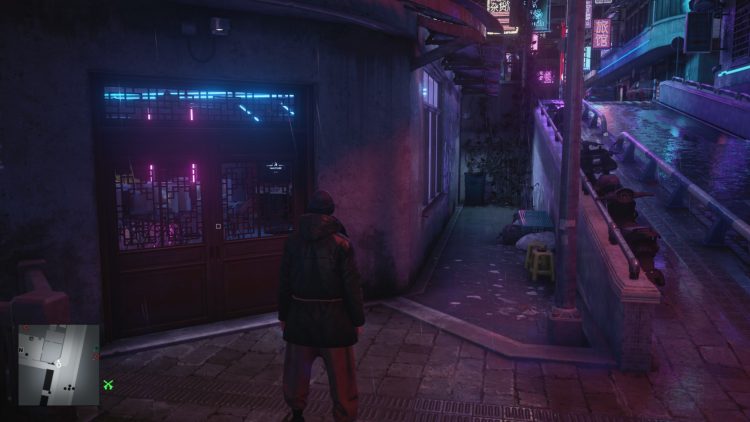 Go around the hallway until you see the recruitment room with the doctor.

Grab the flyer from the board to complete “Last Resort,” and sit down until the homeless man leaves.

Talk to the doctor. Once she has her back turned, climb outside the window. 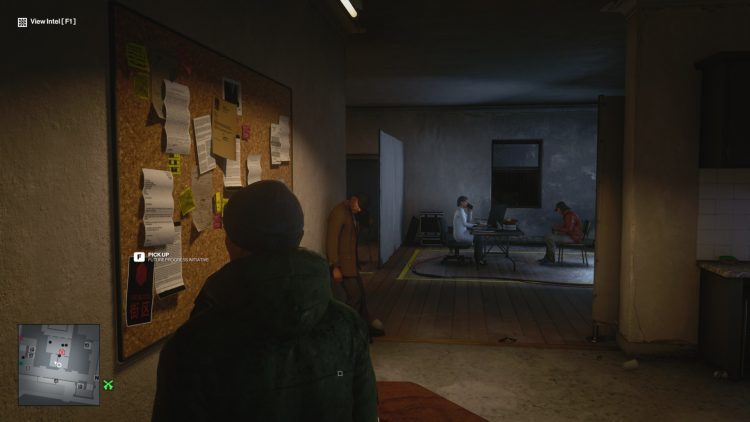 You’ll notice a shortcut here (“Block Ladder”) that can’t be accessed yet.

Anyway, head to the right and climb the pipe. 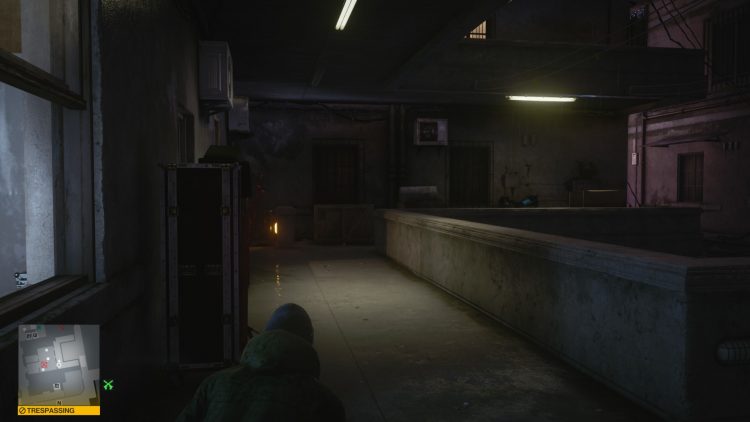 On this floor (Derelict Apartments/level 3), you can pick up the wrench, fuse cell, and crowbar.

You can go back to the landing down below to unlock the “Block Ladder” shortcut. 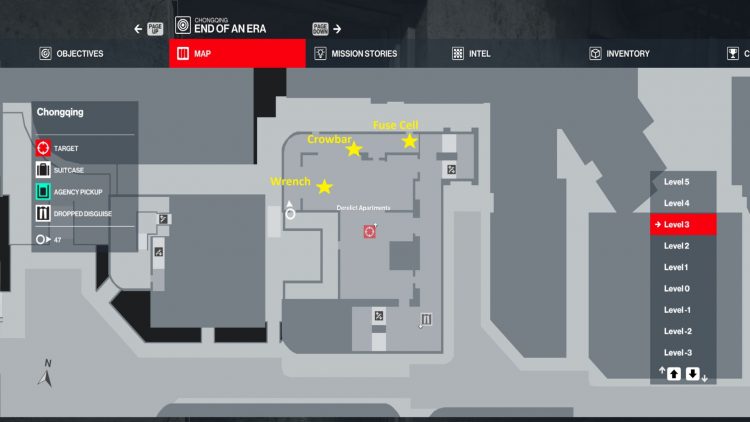 Back in the Derelict Apartments, you can go through the window and do some climbing to the next floor. Alternatively, you can sneak past the guards at the southern section of this area.

Either way, you’ll find yourself in the Benchmark Lab (level 4). Pick up the emetic rat poison in the bathroom as well as the stethoscope on the counter. Likewise, take note of the panels next to the test subjects. 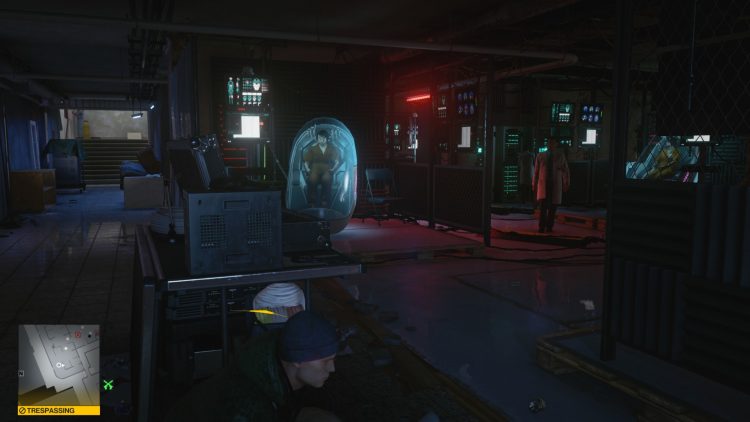 Important save: Continue sneaking (or climbing) until you reach Hush’s Private Lab (level 5). Save now since you can complete multiple challenges, but you’ll probably need to reload a few times.

“Stick It to The Man” assassination challenge – If you’re still wearing the homeless man’s attire, you can execute Hush with whatever means you have. 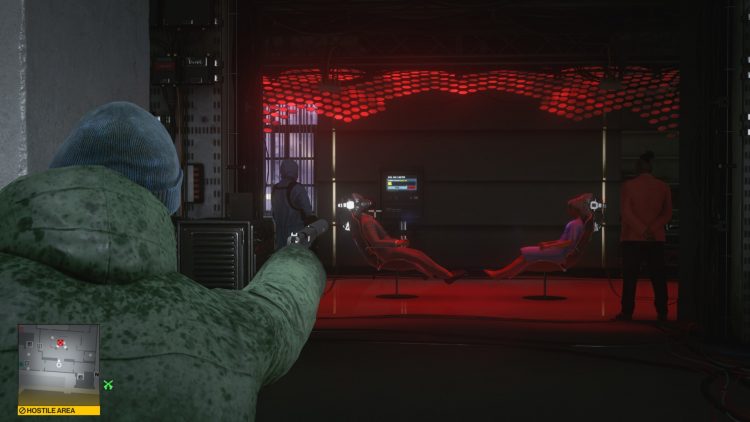 Reload your save when you’ve got that tally done. Instead of killing Hush, go to the bathroom at the northern section of this floor. You’ll find the test subject here.

Subdue him, take his clothes, and present yourself to Hush’s assistant (just make sure Hush doesn’t detect you). 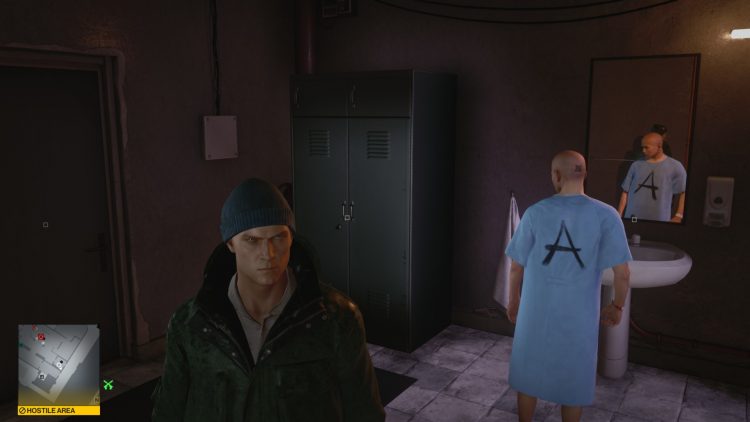 Hush will tell everyone to begin the experiment, so sit on the gaming chair opposite him. Counteract his attempts to control your mind.

He’ll want to boost the power to full, but his assistant wouldn’t allow it. He’ll temporarily leave, and, when no one’s looking, bash his assistant in the head using the toy tank (“Think Tank” challenge). Be quick so you can hide her body in the shadows or inside the locker. 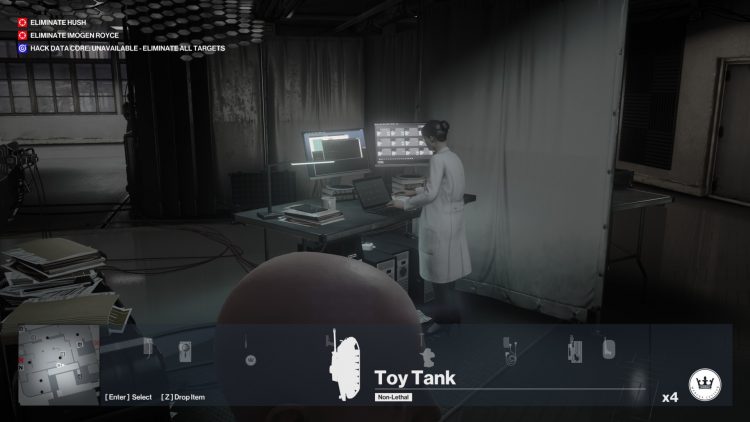 Without her assistant’s concerns, Hush will tell another doctor (Dr. Lei) to overload the system as he attempts to break your will. Keep resisting his attempts when prompted, and Hush will get that second “h” replaced with a “k.” His brain will be an empty husk after getting fried.

Note: You can attack Dr. Lei using the cowboy bust from earlier to complete “Lei Met To Sleep.” Just reload your save in case you get discovered. 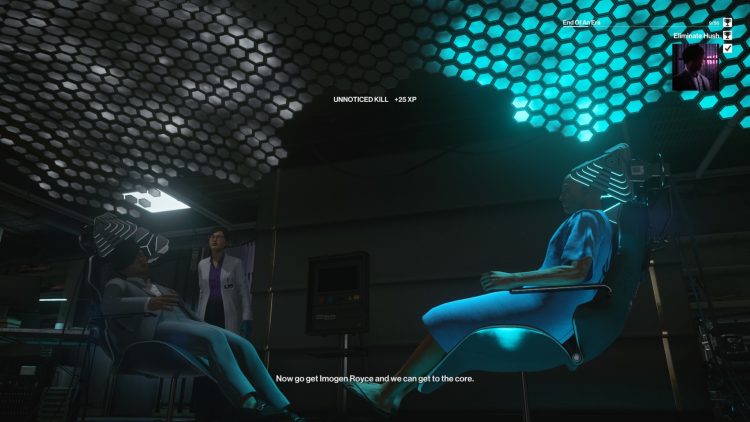 Assuming you didn’t present yourself to Hush’s assistant (and she’s still alive and well), Hush will storm off since the test subject hasn’t come out yet. While he’s ranting, go inside the Therapy Room and subdue the researcher and the guard. Hide their bodies and put the fuse cell inside the panel. 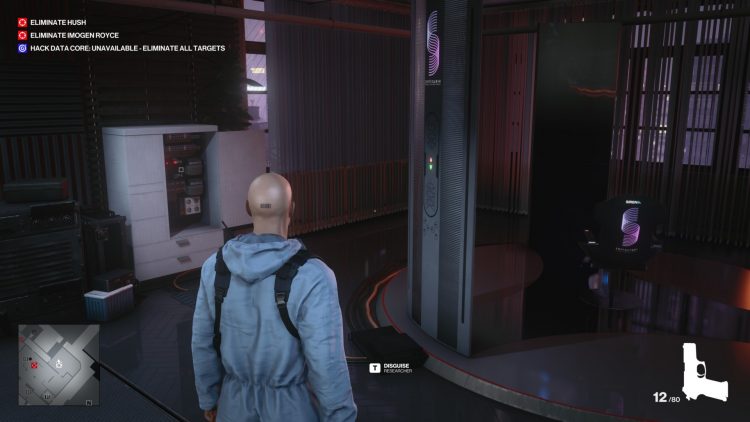 You’ll be waiting for quite some time here. Hush will also go downstairs to the Benchmark Lab to speak with Dr. Lei.

If you follow him without being discovered, you can activate one of the nearby pods. You’ll complete “Ease of Pain,” as well as “The Show Must Go On” (if Hush decides to check the pod). 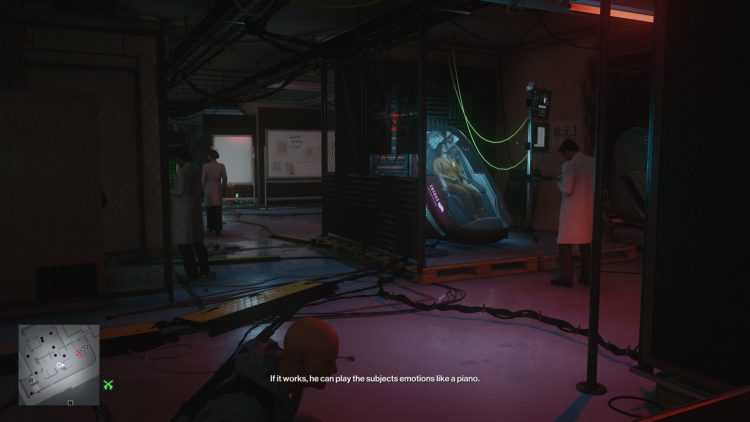 Anyway, once Hush finishes talking to Dr. Lei, he’ll try to continue his mind control experiment once more to no avail.

Finally, he’ll decide to go inside the Therapy Room. If you placed the fuse cell inside the panel beforehand, Hush will sit down in his ASMR chair. Kill him using any method you see fit. 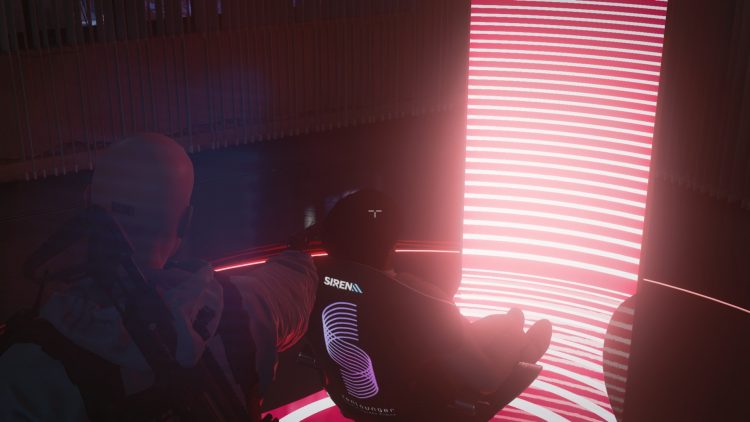 Other assassination challenges related to Hush

Those are the only ones that are specific to Hush (as a solo kill and for the Impulse Control mission story). However, I would suggest trying to complete the other Versatile Assassin tallies, too.

For instance, you can use the stethoscope to garrote him. Likewise, if you have emetic poison, you can sabotage the ventilation system outside. He’ll go to the bathroom where the test subject used to be and you can drown him there.

Anyway, let’s talk about the other target in Hitman 3‘s Chongqing level: Imogen Royce and the Certainty Principle mission story. 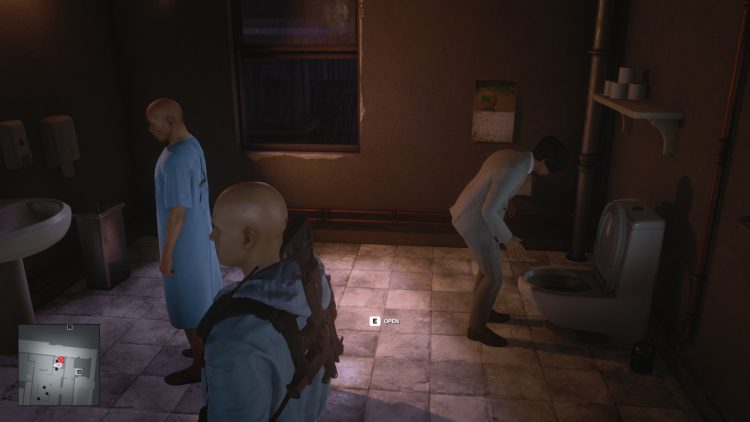 Hitman 3 is available via the Epic Games Store. For more information, check out our Chongqing/End of an Era guide as well as our guides and features hub.