Not quite the finale I was expecting

I had hoped – and even started to believe – that Nioh 2 was building up to a thrilling conclusion across its three DLC packs, but the final expansion, The First Samurai, is a bit of a letdown. It’s not outright bad, and I’m just out here happy to be playing more Nioh, but this DLC surprisingly missed the mark.

If you’re a Nioh 2 season pass owner, great – I think The Tengu’s Disciple and Darkness in the Capital already proved their worth with compelling new weapon types, different-enough locales, and motivation to keep toiling away for the good of the grind. As a package deal, the bundle is priced fairly.

Taken on its own, though, The First Samurai lacks impact, originality, and excitement. It feels more like an obligation to get through rather than something you’d be genuinely stoked to dig into and explore. 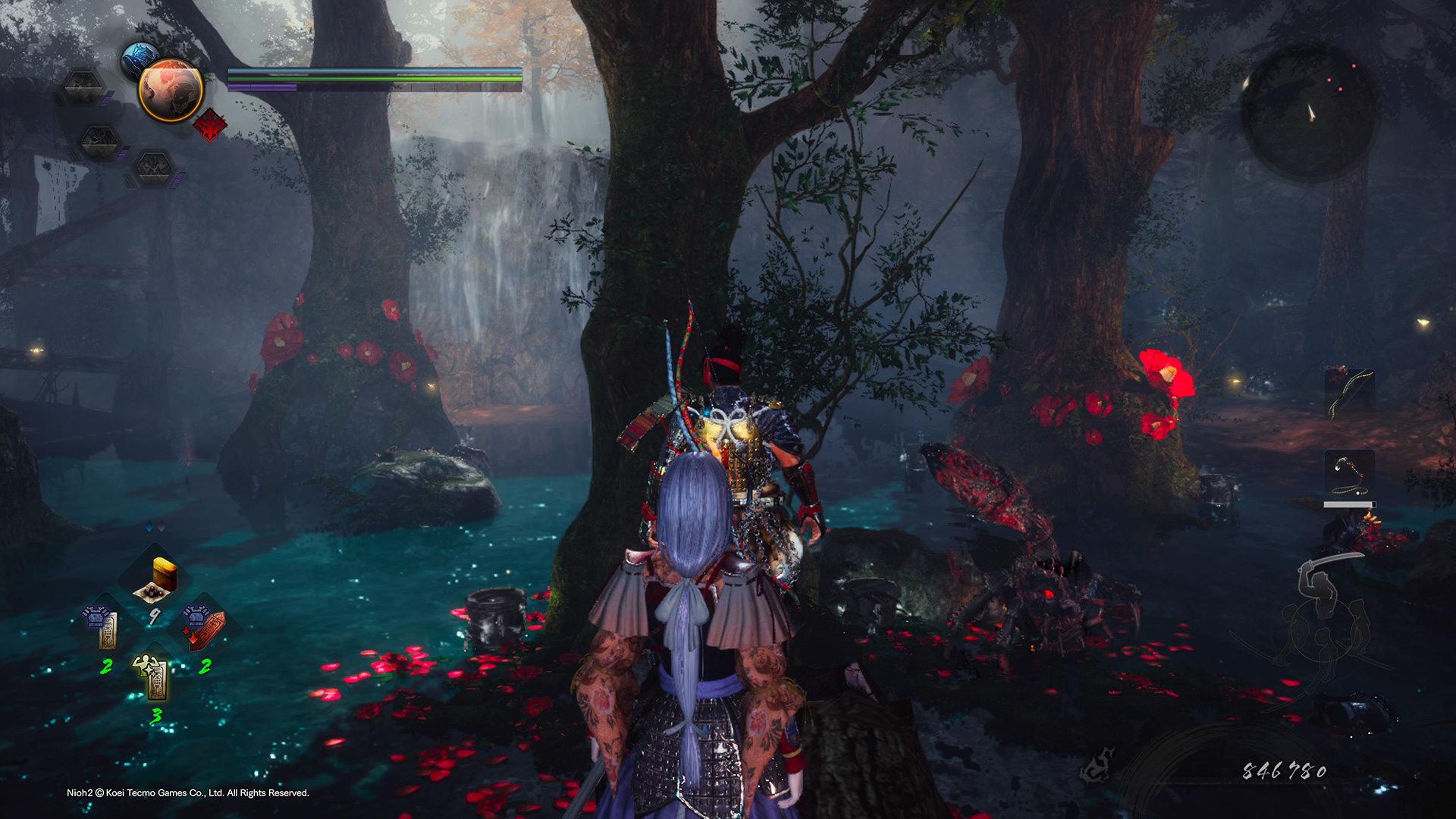 The First Samurai struggles with the classic Nioh 1 “more of the same” problem that we’ve all felt from time to time. If you aren’t in the right headspace – if you aren’t feeling the grind – it’s a bad place to be.

Apart from a nasty little gremlin and a super-beefy bird demon who both pack a wallop, I mostly felt like I was going through the motions with repurposed yokai designs, something this series has struggled with before. The wildest offender this time? A blinged-out variation of the familiar One-Eyed Oni.

That sameness extends into the two new main-story missions, one of which is a dreary village that leads into a (thankfully more vibrant) flower-filled forest. The other is a cool-in-theory but bland-to-explore “evil island.” They’re undoubtedly new zones, but they seemed old even on the first run.

The incentive to soak in the atmosphere isn’t fully there from a storytelling perspective, either. The First Samurai is another trip through time for our half-yokai hero, and it once again syncs up with Otakemaru, the big bad thorn in our side who’s always popping up to cause trouble. That’s fine on the surface – I haven’t been taking these DLC storylines all that seriously compared to the main-game narrative given the lower-stakes premise – but I was hoping to have at least some earnest moments or supporting characters to latch onto. I felt like I did in the prior Nioh 2 packs, but that wasn’t the case here.

Overall, I actually had a better time with the side missions, one of which is a ridiculous gauntlet with a bunch of returning bosses and short breathers in between waves that felt satisfying to clear. And as much as I liked challenging Nyotengu from Dead or Alive and a fierce monk, before I knew it, I was done.

Straight up, you’ll get much more out of this DLC if you’re an endgame-ready Nioh 2 player.

There are several guardian spirits and new weapon-specific skills to unlock if you aren’t there yet, but the real meat is reserved for season pass owners. With the latest update, players who own all three DLC packs can access the final New Game+ difficulty tier, Dream of the Nioh, and The Underworld, a rework of Nioh 1‘s Abyss endgame that’s all about buffing yourself to survive long enough to earn the best loot across highly-repeatable levels. Earning loot for loot’s sake? At a certain point, yeah.

I’m not at that point yet – and frankly, I don’t know if I ever will be – but it does exist for hardcore players who want to perfect their builds. Keep in mind, you can’t access The Underworld until you’ve beaten Nioh 2 on Dream of the Wise difficulty, so if you haven’t been keeping up, it’s a long journey.

Your enjoyment of The First Samurai is really going to depend on where you’re at with Nioh 2.

The biggest difference-makers, at least for me, were the enemies, the story, and the lack of a new weapon type following the Splitstaff and Clawed Fists. Those elements were a big part of why I enjoyed The Tengu’s Disciple and Darkness in the Capital as much as I did, and they’re the reason why I was generally underwhelmed by The First Samurai. My expectations didn’t match up with reality.

I have so much love for this game as a complete package, and I’m excited to keep going with next year’s PlayStation 5 remaster, but I can’t shake the feeling that The First Samurai could’ve done more.