A sign that Steam as a release platform and store continues to grow, over the weekend two big concurrent user records were totally smashed.

When it comes to concurrent users online on Steam at any one time, the record has been broken multiple times over this year, most likely boosted by the numbers of people staying at home due to the COVID19 pandemic. Around 20 hours ago Steam hit a new peak of 24,804,148 people.

Looking over SteamDB, the lifetime concurrent users on Steam shows pretty clear growth. You can also see the clear surge in April, dipping down in August and now surging again:

The other record that was smashed across this weekend is players actually in game. For the first time, ever, Steam had over 1 million players in 2 games at the same time. This was Cyberpunk 2077 and Counter-Strike: Global Offensive, both rather different games making it clear that singleplayer and online multiplayer can existing together peacefully. Well, sort of anyway, until you look at the rest of the top most played games on Steam being multiplayer titles too. 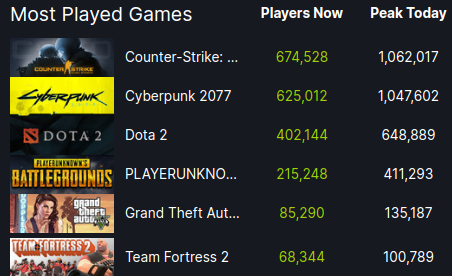 I actually thought there were more games that hit 1 million together before, but nope, this was a first.