As Drycha scours the world of Total War: Warhammer II in her Mortal Empires campaign, you’ll eventually gain an opportunity to obtain her legendary hero, Coeddil. It’s also part of a quest chain to obtain her unique item, the Fang of Taalroth. Here’s our guide to help you out.

Note: Please be reminded that Drycha can only be unlocked if you own the Realm of the Wood Elves DLC. For more information about the newest DLC, check out our Total War: Warhammer II – The Twisted & The Twilight guides and features hub.

Drycha’s questline to recruit Coeddil in Total War: Warhammer II becomes available once she reaches level 3. Here are the steps:

After completing the above steps, the quest battle to free Coeddil becomes available. 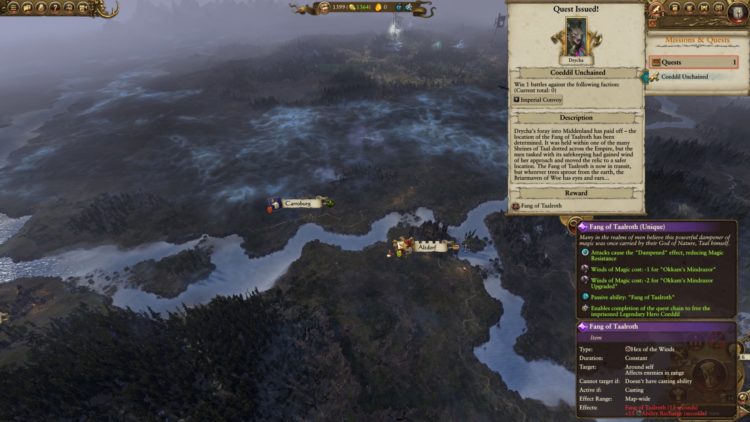 In this encounter, you’ll fight a lot of Wood Elves. Still, the battle progresses a bit differently compared to a regular slugfest.

The goal here is to destroy the Waystones on the western and eastern areas of the map. Then, much later, you’ll have to advance towards the hill (I call it Weathertop) to destroy two more Waystones. Doing so frees Coeddil. 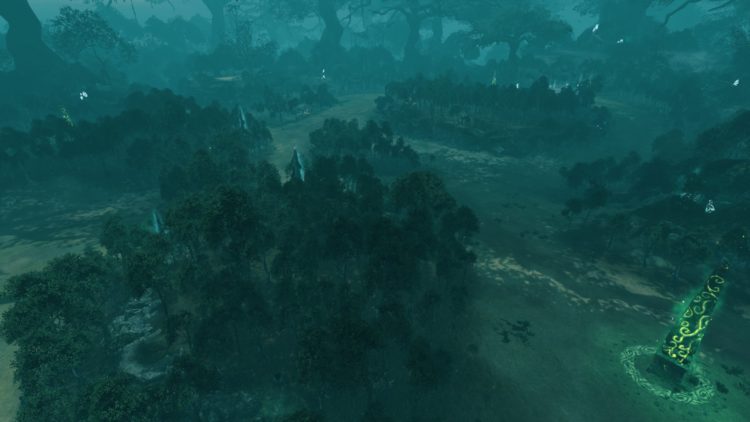 If you head to the Waystones off to the sides, you’ll notice that there are patrolling Wood Elf units and heroes. Beware since the forest can hide them and they can easily ambush you.

You could also try kiting them with Drycha’s animal units which are definitely faster and more expendable. Your archers should make quick work of them once they’re out in the open. 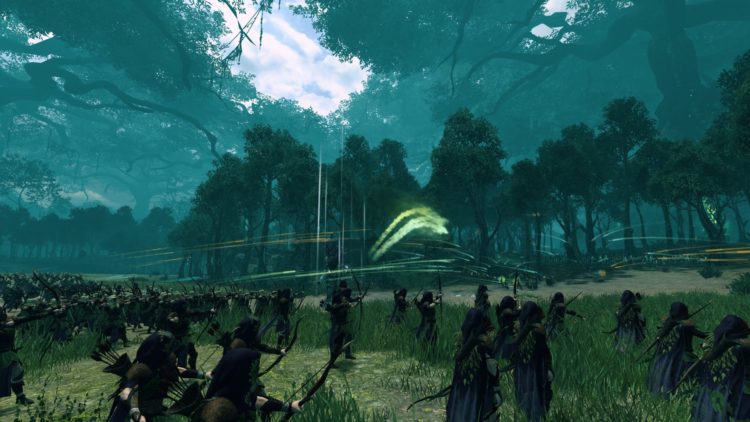 The eastern and western Waystones, once destroyed, each provide you with reinforcements that’ll turn the tide of the battle.

The two extra armies are each led by a Malevolent Ancient Treeman with lots of Great Hawks, Cave Bats, and Malevolent Dryads/Tree Kin. 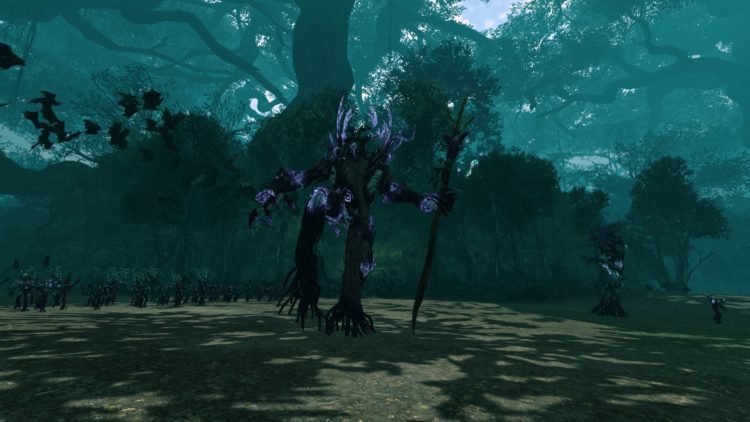 These armies will swarm the sides of Weathertop, drawing fire from the archers above.

While they’re providing a neat distraction, get Drycha’s forces to the last two Waystones at the top of the hill. 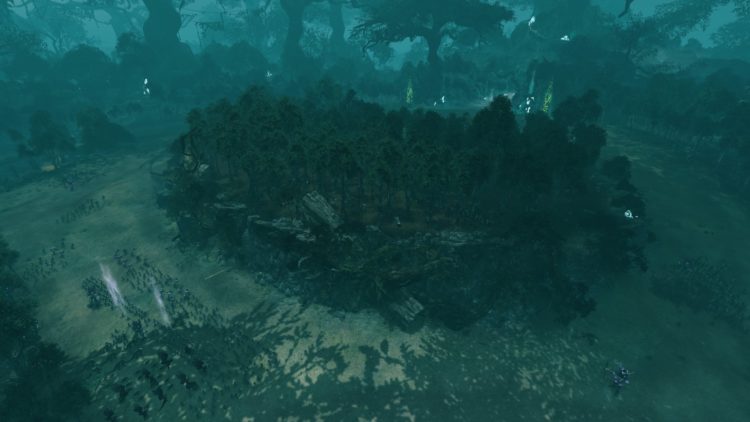 Make sure you demolish these structures quickly with your tree peeps. I’m not sure if it’s based on the time that’s elapsed, your proximity to the Waystones, or how many Wood Elf units have routed, but lots of Asrai reinforcements will suddenly spawn. These include Bladesingers and Great Stag Knights, too.

The reinforcements completely took me by surprise. I consolidated my forces quickly to go on the defense. Meanwhile, my AI allies crushed the stragglers. 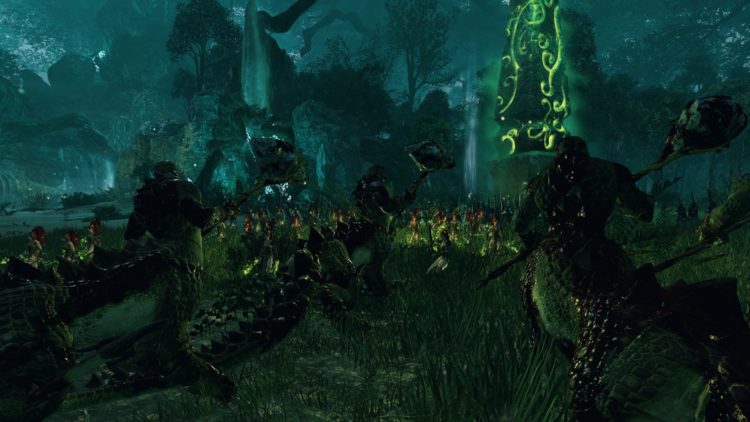 After destroying two Waystones, Coeddil will be released. The Ancient Treeman reunites with Drycha and the two can be used to stomp the Wood Elves into the dirt. 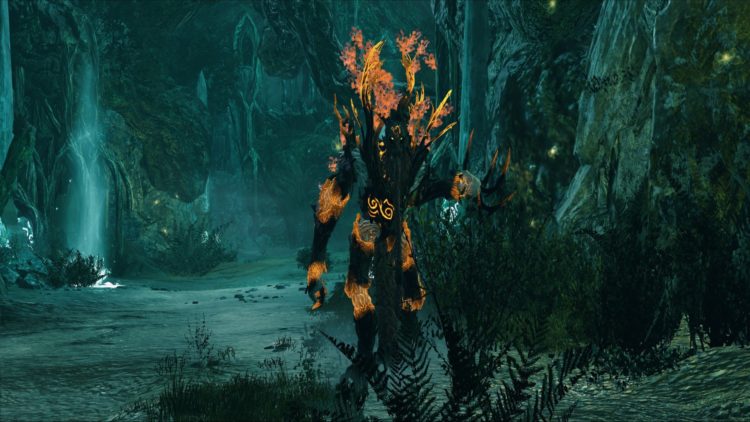 I must admit that Coeddil felt a little underwhelming when compared to Ariel (who’s available to all other Wood Elf leaders). The demi-goddess and Avatar of Isha boasts multiple amazing spells and abilities, and she’s decked out in unique/purple gear. Coeddil, meanwhile, doesn’t even have a single item.

Coeddil does have perks and abilities like “Unseelie Court/Blight of Terrors” (enemy leadership reduction) and “Exile’s Return/Annoyance of Netlings” (buffs for Dryads and Treeman units, plus a melee/weapon debuff on enemies). Likewise, he has a combination of Lore of Dark Magic and Lore of Beasts spells. Examples include “Power of Darkness,” “Doombolt,” and “Transformation of Kadon.” The “Lore of the Forgotten” perk even lowers the costs of all spells in the army he’s embedded in.

Lastly, he’s got “Changing Nature” (-75% costs of aspect upgrades) and “Writhing Branches” (awakened forest attrition vs. enemies). However, both perks add a bit of Chaos corruption to the local province. If you mostly have public order and untainted perks/buildings/characters in your provinces, then that extra Chaos corruption can be annoying. Plus, Beastmen, Norsca, and Warriors of Chaos forces will invade a bit later in your Total War: Warhammer II campaign, so you don’t really need that extra Chaos stuff, eh? 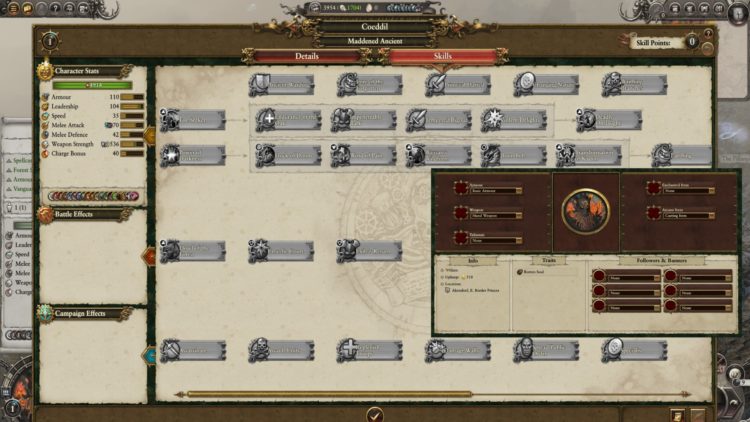 Total War: Warhammer II – The Twisted & The Twilight is available via Steam. You can also grab the Realm of the Wood Elves DLC if you want to use Drycha (as well as Orion and Durthu) in the Mortal Empires campaign. For more information, check out our guides and features hub.