We can’t get jobs ’cause our arms show…

A grown man probably shouldn’t be so interested in a game where all you do is play with toy trains, but I never had a wooden train set growing up. We skipped over that staple of childhood in favor of Hot Wheels tracks. At the time, I didn’t really mind much as those die-cast cars were way cooler than some blue plastic engine with a face on it. However, after spending two weeks with Tracks, I’m starting to think I might have missed out on something great. 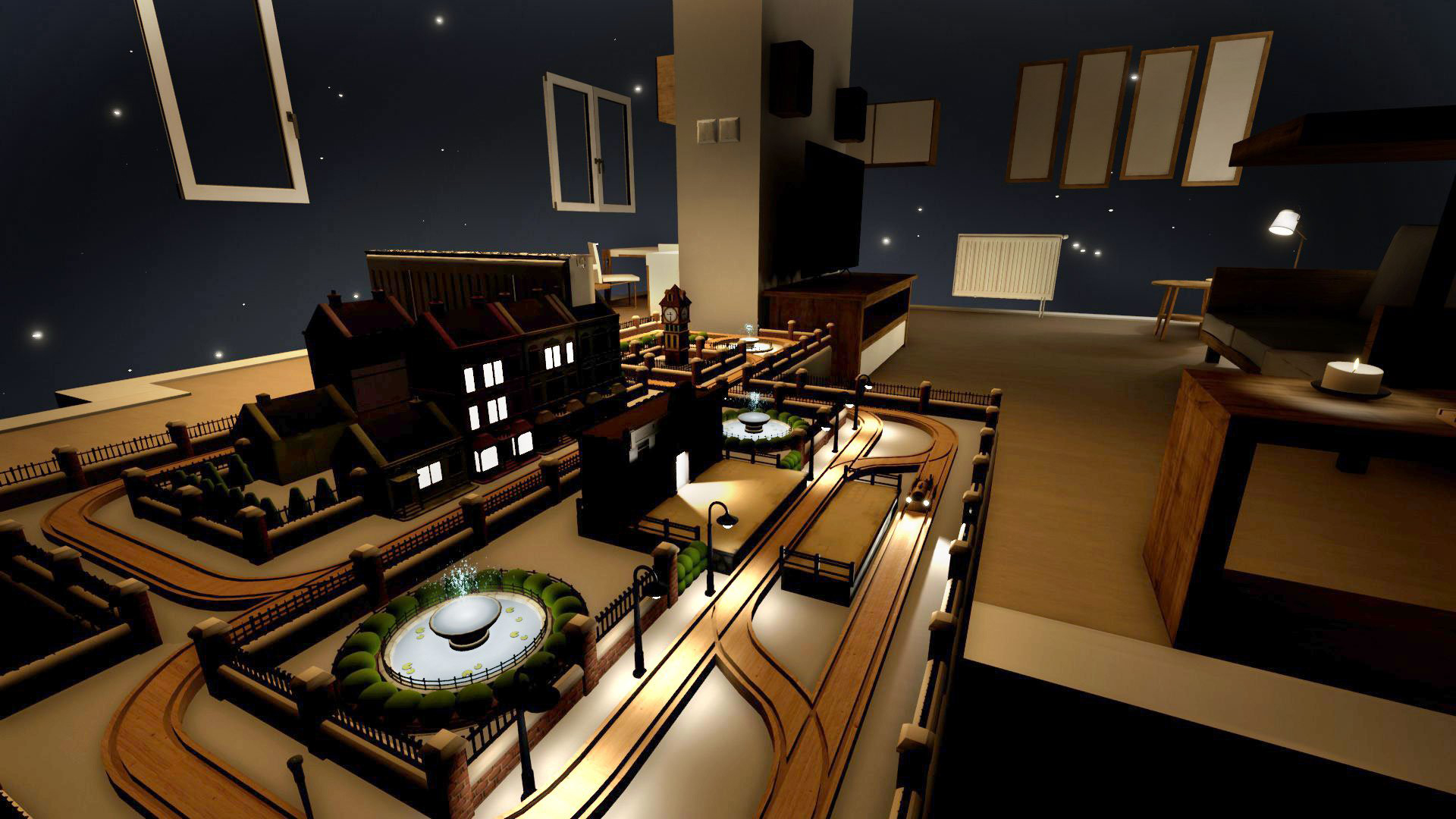 Tracks is a sandbox game about building wooden toy train tracks. That’s it, that’s the whole shebang. You pick a setting, be it an expansive blank canvas, a living room set, a bedroom, or the moon, and then get started laying down track, installing buildings, adding people to your world, and generally seeing what type of creative playsets you can create with the expansive list of accessories and track pieces. It’s all the fun of playing with a Thomas the Tank Engine or Chuggington set if you had an unlimited amount of money to make them as big and elaborate as you wanted.

Previously released on PC and Xbox One, Tracks: Toybox Edition brings together every update and DLC pack into one complete package. And while I know this isn’t exactly a graphics-intensive title, I love how it looks on my Switch. It’s a smart-looking game with an art style that bearhugs my inner child. Whether in docked or handheld mode, it keeps a solid framerate and has a pretty decent draw distance. And you’re given immense freedom in how big or how small you can make your sets. As for the controls, well, those take some getting used to. Navigating a 3D space isn’t quite as intuitive as I would have liked, particularly when trying to raise or lower the cursor while still building onto my track set. If you’re wondering, there are no touch control options for handheld mode.

While I know most of my time will be spent toiling away at my little wooden villages, I had a great deal of fun tackling the challenge mode known as Passengers. It’s available in both the modern apartment and bedroom settings, and it tasks players will quickly building tracks that will connect passengers to their stations. The idea here isn’t to make a coherent set or one that necessarily looks good, but rather one that’ll quickly get the job done. There are some fun challenges with this mode that encourage players to branch out in their designs and just have fun with the possibilities. Very few other train simulators would ask you to build a rail line with jumps, but this one does.

That’s actually about all there is to this game. Tracks is a charming little toy train simulator with a very niche audience in mind. It’s a pleasant experience on Switch, but there is room for a lot of fine-tuning. I repeatedly came across several design quirks when building my sets that should really be addressed. I think the tracks themselves and how they’re constructed are okay, but messing with the scenery around those wooden rails is often a hassle.

For starters, it is way too easy to delete the wrong object as it can be unclear what the cursor is highlighting. Some objects, such as passengers, can’t be deleted. If you place one by mistake or change your mind later on, you either have to learn to live with it or hope pressing the Undo button doesn’t roll back too much of your creation. Tracks gives you the option to lay down pieces of scenery that snap to a grid, or you can opt for more freedom in your placement, but the latter option isn’t available for all of the items. Some pieces of decor are supposed to connect to the buildings you erect, but it can be a crapshoot to get them on right. I’m talking to you, stinking house lights.

Fixing those issues — along with improving the 3D navigation, adding more camera options when driving the train, and giving us some more light when playing at night — would go a long way toward making the gameplay of Tracks a more pleasurable experience. But the user interface needs work too. In a very strange design decision, you can upload any created track into any of the available settings. So if you make something in the bedroom, you can open it in the modern apartment and see all the different ways your track and scenery clip through the furniture. The game did crash on me once when trying to save, and one of the three pre-designed tracks wouldn’t properly load for me, freezing the picture and forcing me to exit out of the game. Larger sets can take a bit of time to load and, unfortunately, you’ll only be able to enjoy your creations on your Switch as there is currently no way to share your designs with others.

Thought it would greatly benefit from some post-release updates and tweaks, Tracks: Toybox Edition delivers just about everything I could have wanted with a wooden train set simulator.