Time to fight back

I still can’t believe that Zelda: Breath of the Wild was released over three years ago. Insanity!

It feels like it’s always been here, because to many, it’s a source of evergreen enjoyment. Recently I’ve talked about how my wife decided to play through Breath of the Wild for the first time: which we’ve been doing on separate Switches next to each other. Naturally, I’m discovering tons of new things for the first time. That’s just what Breath of the Wild does. It’s built that way.

Now, we’re getting a prequel that’s going to be divisive for multiple reasons: it messes with the timeline and the narrative, and it’s a Warriors/Musou game, which creates an even further divide on its own. Going in with an open mind (to both story changes and Warriors shenanigans), I came away impressed.

At some point in 2017, Nintendo was probably scrambling to follow-up on the runaway success of Zelda: Breath of the Wild. Now we have a sequel on the way and this prequel spinoff. It’s a franchise within a franchise. While Age of Calamity won’t be for everyone, it fulfills a great niche.

To that end, Calamity tries to make sense of the prequel conceit. Yes, time travel is involved as Age of Calamity gets all MCU on us on multiple levels. Some of you are going to hate it. You can ignore it if you want. But it had this Zelda fan on the edge of his seat, and at times, gasping at some of the revelations and story beats.

There’s a real, concerted effort to tie this into the events of Breath of the Wild at every turn. Worldbuilding factoids are craftily tucked away in nearly every cutscene, including major narrative reveals like how each Champion came to pilot the divine beasts. I can’t spoil a few things in this pre-release review: I wouldn’t want to anyway. But suffice to say there’s plenty of fist-pump moments in this game if you’re invested in this world.

It’s not all a retread, either. We’re seeing some of these characters in a brand new light, or, in many cases, as a unit. Breath of the Wild, by design, had a minimalistic storytelling style that often left us wondering, say, how Mipha would have interacted with Daruk. That banter and interplay from the characters is one of the strongest aspects of Age of Calamity, as Nintendo and Omega Force tried to make this feel like a bonafide prequel.

The voice actors really sell these moments, and the re-used sound effects and menu sounds from Breath of the Wild feel right at home. The new stuff is good too. The little Guardian you may have seen in all the promo material is super cute and has extreme Bubo-from-Clash-of-the-Titans vibes. Several rarely seen characters are also developed to the point where they feel fresh, even if they made cameos or quick appearances in Breath of the Wild proper.

With all that praise of the story in mind, the Warriors/Musuo style combat system does not reinvent the wheel, though there are a few Breath of the Wild concessions. You still have your basic light and heavy combo system (and all the roteness that can entail), but characters also sport a unique action button, while also accessing the four core Sheika slate runes (bombs, stasis, magnesis, cryonis); all of which provide unique animations and mechanics for each party member.

Link fires a bow and arrow and chucks a ton of bombs. Zelda can “pop” her carefully laid rune abilities and craft a giant bomb that sheds other bombs. And so on. By the time you start rolling around with Daruk and noticing the elegant dance-like dodges of Urbosa, you’ll get really drawn into the nuances of each character. Runes also have practical uses: Magnesis allows you to dig buried chests out of the ground just like Breath of the Wild. It’s a small but welcome touch to help with all of those connection motifs I mentioned earlier.

As for the roster, the core early game selections (Link, Impa, Zelda) are very strong, as are all of the Champions (Revali, Mipha, Daruk, Urbosa) and beyond. Link is the baseline quintessential Warriors character, with very easy pick-up-and-play abilities that are fun from start to finish. Impa and Zelda are a bit more advanced and methodical, with the former able to trigger clones and the latter utilizing all four runes in her base kit: which can be sprung like traps. 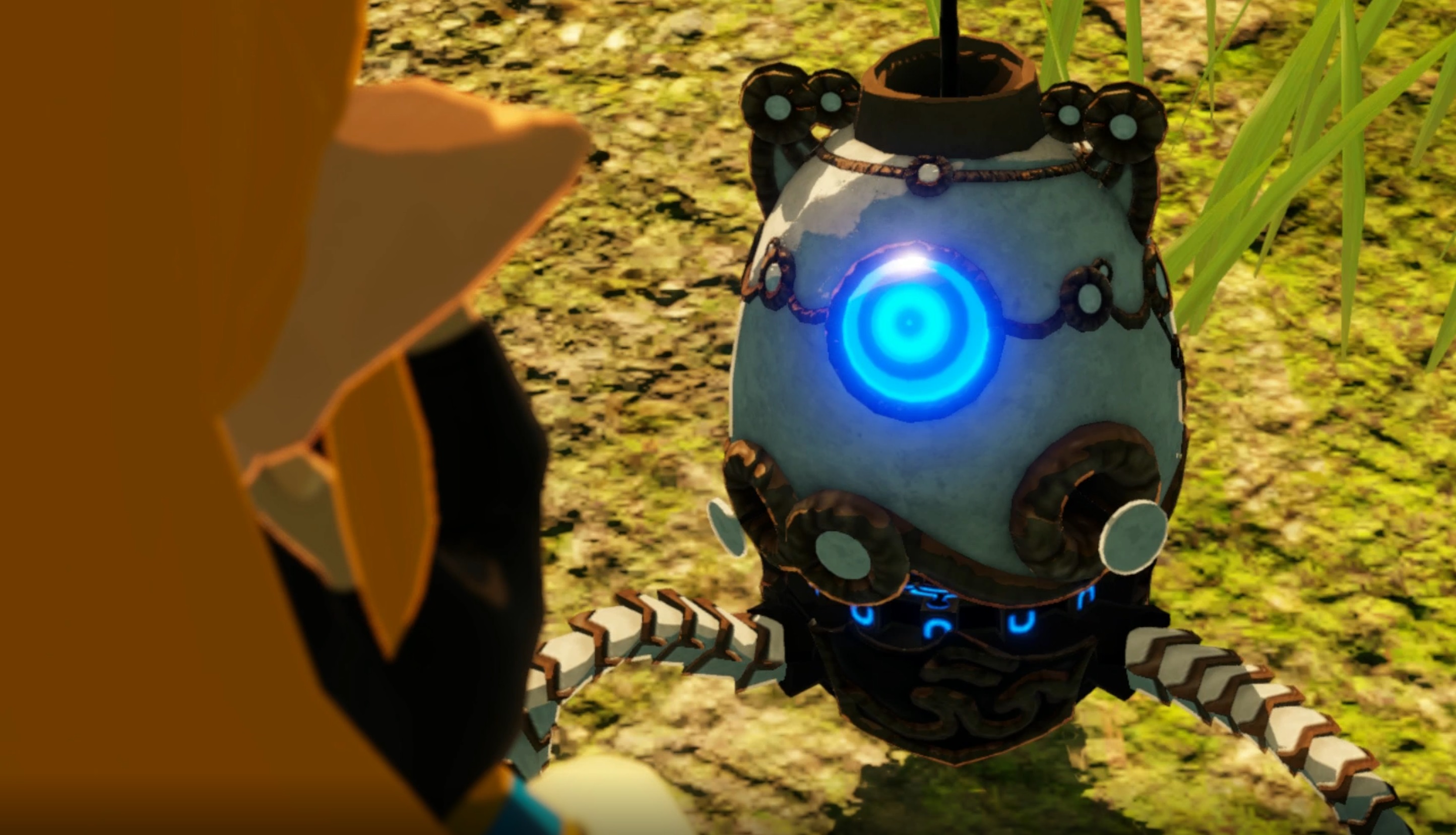 Revali is a personal favorite of mine, with the power to soar through the sky and rain arrows down from above. Urbosa also rules with her lightning-based charge attacks, which channel Dragon Ball in all the right ways. As much as I loved the “all-stars” approach of the first Hyrule Warriors, these characters are more personal and focused. The cast isn’t as expansive, that’s for sure, but there is very little in the way of “clone” mechanics.

You also finally get to pilot and use the divine beasts, which consist of very arcadey and linear shoot-’em-up sections. You basically just get to wreck shop with them in vehicular-based substages, and not all of them are created equal in terms of fun factor and lack of clunk. While these portions are going to be divisive and bring a lot of the game’s technical issues to the forefront, I found them to be a fun little flight of fancy, as well as an effective means of showcasing how powerful these figures are in the world of Breath of the Wild.

Wait, technical issues? Well, this is a Warriors game! You may have noticed from the demo that the framerate can hit abysmal levels, especially in split-screen multiplayer — but even playing solo, docked. This was not “fixed” in the full version. If this is unacceptable to you, I would avoid Age of Calamity. As for me, I played through nearly the entire game with a local co-op partner, and only felt the sting of the framerate for a few moments in any given level. Try the demo and gauge your tolerance level. If you hate it, don’t buy it unless there’s a patch.

In case I wasn’t clear, this is not an open-world game, despite sharing the same world map from Breath of the Wild. You’ll select critical-path missions and sidequests from a fancy menu, with the option to buy upgrades and shops outright with Rupees (the main in-game currency) and items you pick up during levels. If you upgrade enough stuff, that region will grant you bonuses on top of everything you bought. 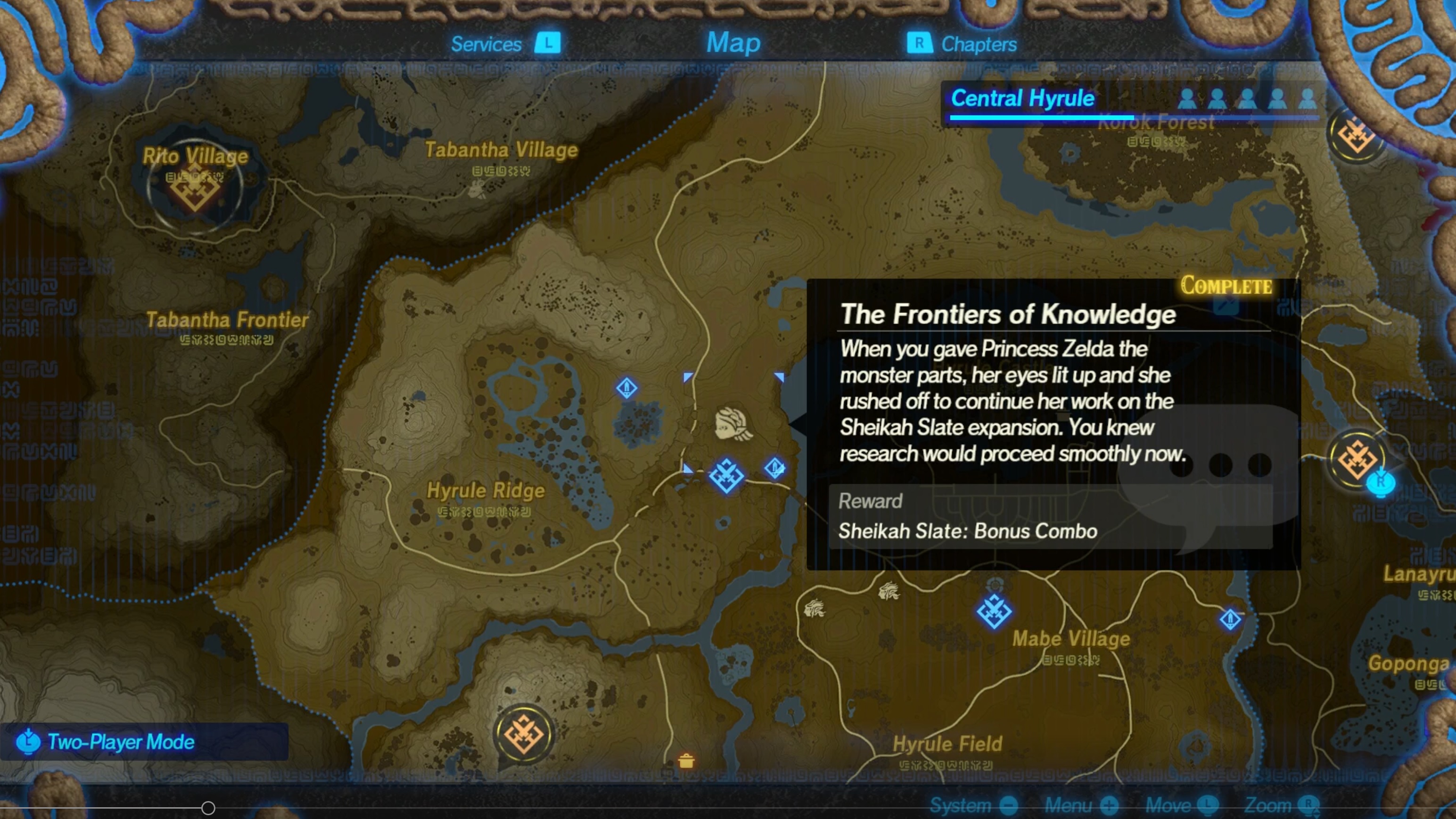 Upgrades grant you access to new shops, which can be used for new reagents: which, unlock more shops and upgrades. It’s cyclical and can be annoying at times, as the map is extremely cluttered. While Omega Force attempts to tie character upgrades to specific icons of faces, a lot of them look the same and it can be tough to actually tell what is what unless you manually click on an object. By the end of the game, this screen can get unwieldy.

You’ll have to learn to sift through it too, because that’s what the postgame mostly consists of: sidequests and upgrades. The campaign is around 15 hours and a blast, but the postgame isn’t quite as expansive as, say, the extra DLC “maps” in the original Hyrule Warriors. It’s safe to say that we can expect DLC to also fill in that gap.

Hyrule Warriors: Age of Calamity brings some of the same “Warriors” baggage along with it, but as someone who was always into these Omega Force romps, the juice was worth the squeeze. The story was genuinely enthralling throughout and it serves as a great companion piece for Breath of the Wild, while forging its own identity in many respects. I suspect a lot of the alterations are going to be controversial, but I like that they took some big swings and really went with it.