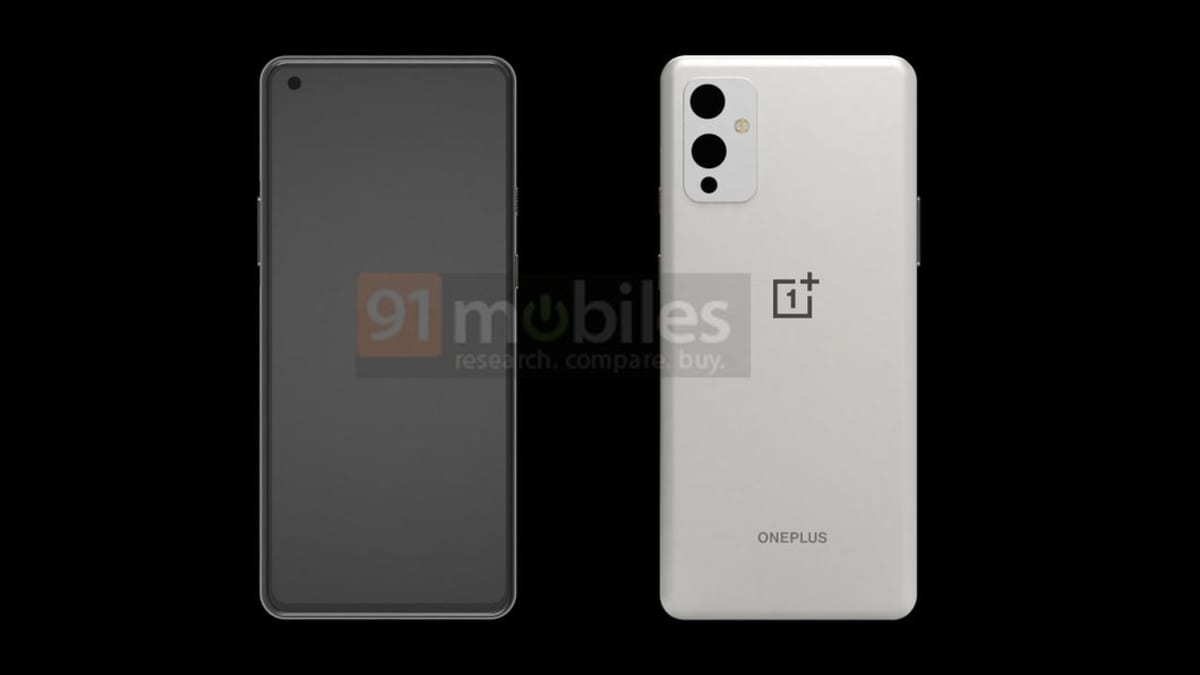 OnePlus 9 render suggesting its key design elements has surfaced on the Web. The CAD-based render shows that similar to the OnePlus 8 and OnePlus 8T, the next-generation OnePlus phone will come with a hole-punch display. The OnePlus 9 also appears to have triple rear cameras at the back. Alongside the render, a benchmark listing surfaced online that suggests the OnePlus 9 specifications. The new OnePlus smartphone is rumoured to debut sometime in the middle of March — some weeks earlier than the launch of the OnePlus 8 series that took place in April.

The OnePlus 9 render, courtesy 91Mobiles, shows the front and back of the unannounced phone. It highlights the hole-punch display design that we already saw on the OnePlus 8 and OnePlus 8T models. At the back, the phone appears to have the triple rear camera setup in a vertical alignment — with two camera sensors featuring a large circumference. An LED flash is also visible next to the camera sensors. The OnePlus 9 may have one less camera sensor at the back when comparing with the OnePlus 8T that carries quad rear cameras.

OnePlus also appears to retain its alert slider and volume rocker on the OnePlus 9. The render also suggests that the new phone could also ditch the headphone jack.

Apart from the CAD-based render suggesting the design of the OnePlus 9, 91mobiles has leaked some of its key specifications. The phone is said to have a 6.55-inch display with a 120Hz refresh rate and will be powered by an octa-core Qualcomm Snapdragon 875 SoC. It is also speculated to have 65W fast charging support. In addition to the leaked details, a phone carrying a model number LuBan LE2117 has appeared on benchmark site Geekbench. The model number is associated with the OnePlus 9, as noticed by a Weibo user.

The Geekbench listing suggests that the OnePlus 9 runs on Android 11 and comes with 8GB of RAM. The listing also seems to have suggested the Snapdragon 875 SoC on the smartphone. Furthermore, the phone receives a single-core score of 1,122 and a multi-core score of 2,733.

OnePlus has not yet revealed any official details about the OnePlus 9. It is, thus, safe to consider the surfaced details with a pinch of salt.

Is OnePlus 8T the best ‘value flagship’ of 2020? We discussed this on Orbital, our weekly technology podcast, which you can subscribe to via Apple Podcasts, Google Podcasts, or RSS, download the episode, or just hit the play button below.