Playing Bugsnax while starting a diet is probably not the ideal way to enjoy the game. I’m sitting here doing my best to not think about food and the Grumpuses of this island keep asking me to chase down grinders with googly eyes or cinnamon roll snails. Or fiery bowls of ramen. Or Bungers.

God I could go for a Bunger right now. 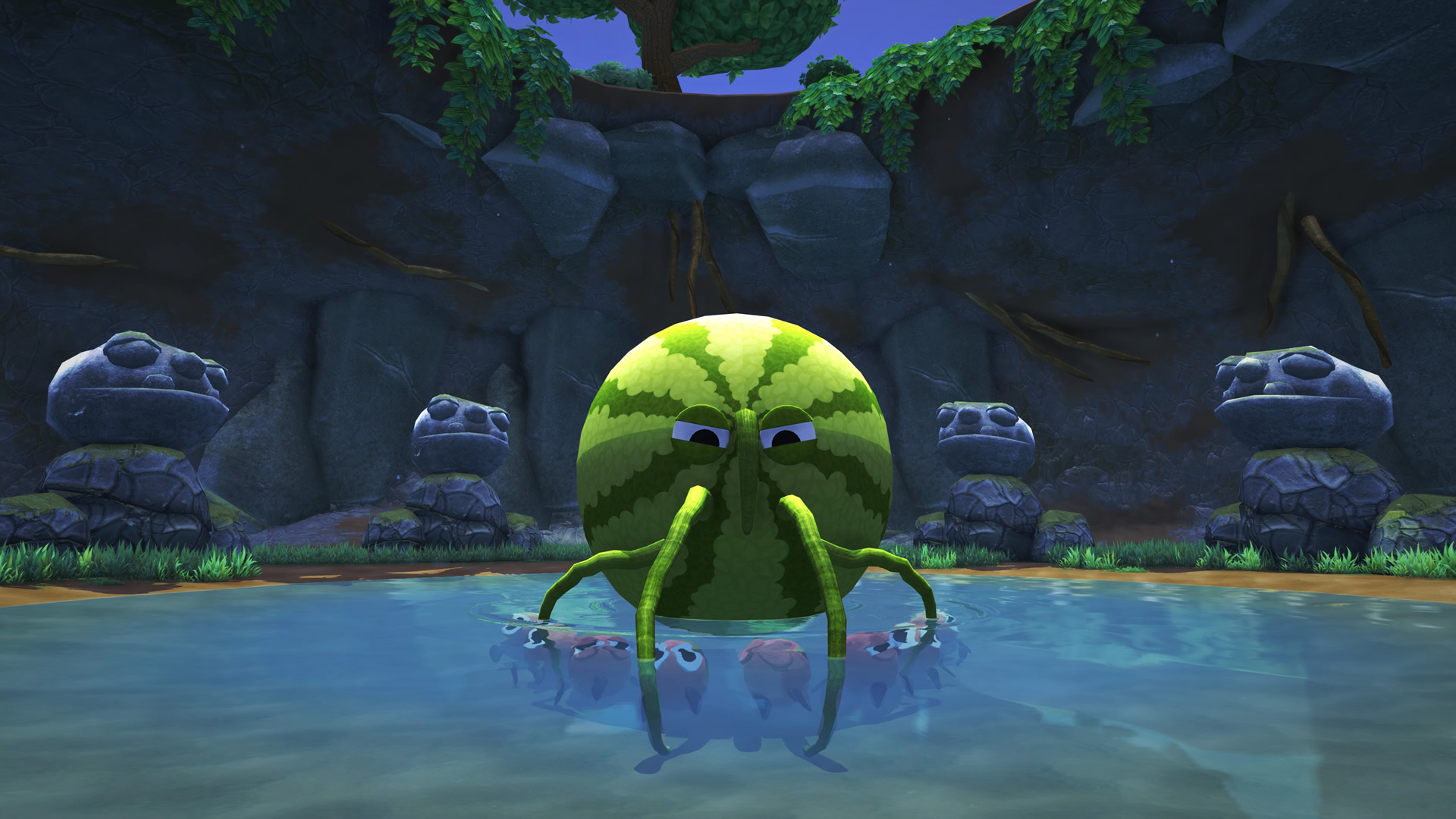 Somewhere off the coast of the mainland sits the mysterious Snaktooth Island. It’s a colorful and compact place, and it could be a bottomless source of food with the creatures known as Bugsnax. They could feed the world, or they could all be fake news, but as Grumpus on the verge of losing their career in journalism, it’s up to you to find out if this is a hoax or not. After receiving a filmstrip from the famed-and-equally-disgraced explorer Elizabert Megafig about her incredible discovery, you set off in an airship for the island and quickly learn this won’t be the simple story you thought it would be.

Elizabert is gone, and her partner Eggabell hasn’t been seen for days either. And yes, they all have names that sound like the author of a cookbook in the Harry Potter universe. Anyway, without their fearless leader around to catch Bugsnax, the residents of Snaxburg have gone their own ways and scattered to the far reaches of the island. After meeting Filbo, the near-useless mayor pro-tem of the town, you save his life with some Strabbies and agree to help reunite the community and find Elizabert.

Completing either of those tasks will require catching a lot of Bugsnax. Unfortunately, Filbo isn’t so good with wrangling these critters up. In fact, nobody else on the island bothered to learn how besides Elizabert. But you can do it, and throughout your journey, you’ll be given an expanding set of tools to catch the 100 different Bugsnax that populate this island. Some are captured quite easily. Bugsnax like Crapples — apples that are crabs — or Rootles — carrot worms — will walk right into your trap. Others need to be closely studied to figure out which of your tools will work on them.

Your most important tool is your SnaxScope. Scan a Bugsnax with it and it’ll show you its set movement pattern (if it has one) and tell you some quick facts about it that’ll help you catch it. The information isn’t direct instructions on how to do so, but it acts as a good starting point. The rest is going to take a little common sense and trial-and-error.

What you’ll quickly learn, however, is that there are actually very few different strategies required for catching Bugsnax. While there are 100 different ones around the island, as you advance further into the game, you’ll start to notice some repeating patterns and reskins. Angry baked potatoes become angry loaded baked potatoes, for instance. While these alternate versions of the ‘snax can vary in how aggressive or fast they are, they’re generally captured in the exact same manner, resulting in a game that really doesn’t have a difficulty curve to it. By the time I reached the final section of the island, I only needed to observe a Bugsnax for a few seconds before I’d figure out what I need to do to catch them. There are some giant Bugsnax that aren’t that simple, but for the sake of completing the story, you really only have to rely on a small handful of tactics.

You’ll also have to hope the AI and physics don’t screw up your solutions. I had several Bugsnax get stuck on level geometry in my playthrough, requiring me to leave the area so they’d reset. With load times the length they are on PS4, I rolled my eyes every time it happened. Bugsnax also don’t necessarily act in the ways you’d expect them to. When trying to catch a crawling frozen popsicle, I caught it on fire and watched as it would run back and forth between the edge of the ocean and a coconut tree, never fully going into the water to extinguish itself. 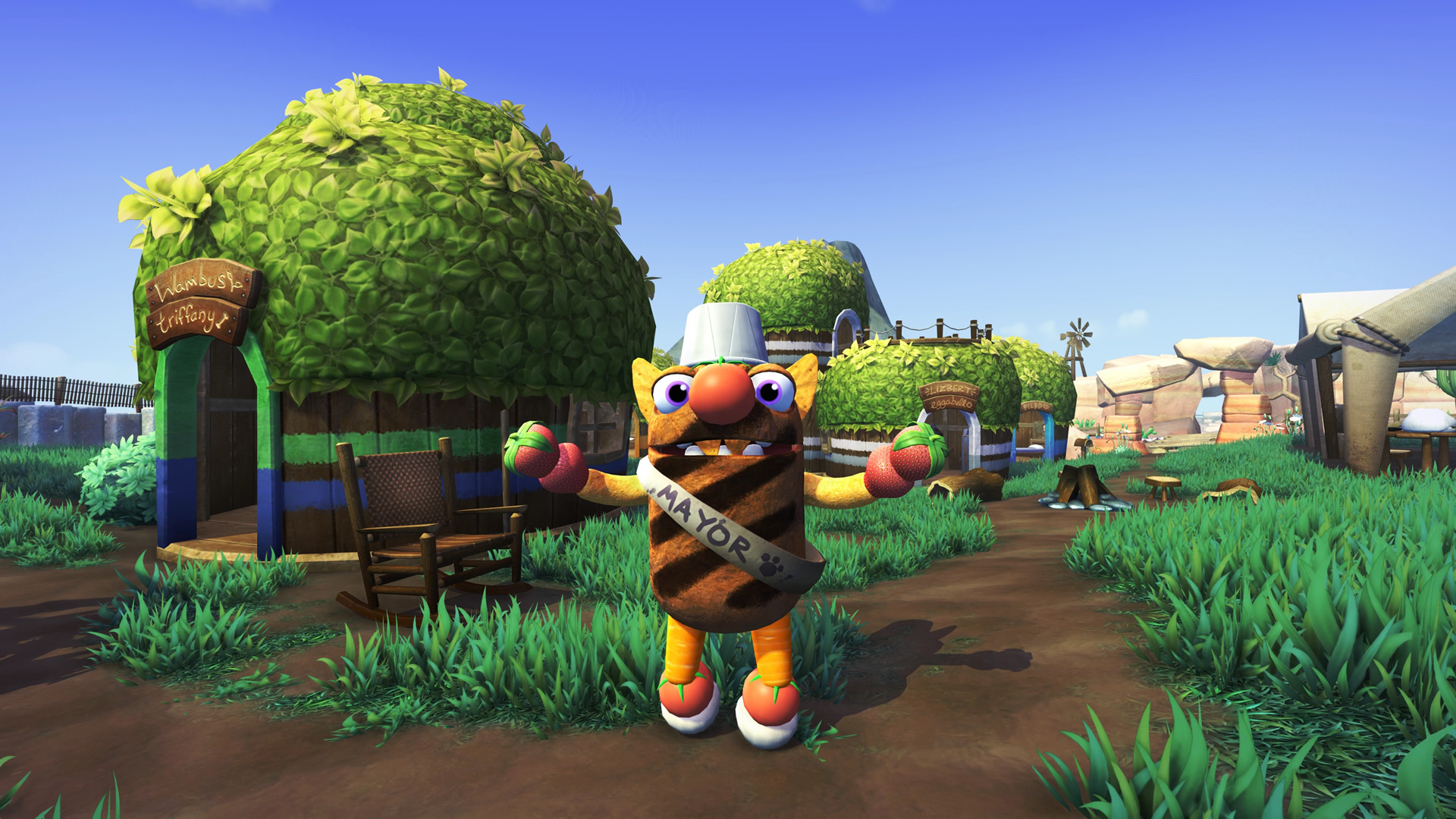 Despite how cute the Bugsnax are and how they squeak their name out of the PlayStation controller speaker every time you catch one, I was far more interested in learning all I could about the Grumpuses of Snaxburg. They are incredibly well-written and voice-acted, each with their own unique personalities, goals, and relationships with the others. And, it’s a diverse bunch too, with LGBTQ and non-binary characters among the cast.

While you can blow through the campaign in about seven-and-a-half hours, I would suggest taking your time and getting to know all the residents you meet along your journey. When you find one in the wild, you’ll have to complete some tasks for them that almost all revolve around catching Bugsnax. Once they’re back in town, they’ll give you optional quests, asking you to do some investigating or feed them specific Bugsnax. Doing so will transform parts of their body into food, and you can create some seriously strange and delicious-looking Grumpuses that way. Seeing how silly I could make them was a delight, for sure, but it’s their personalities that I most enjoyed in our interactions.

It’s been a while since I’ve played a game with a cast of characters that was so good it elevated the rest of the experience, but that’s where I am with Bugsnax. Because they’re brilliant. And the concept behind Snaktooth Island is equally brilliant. It’s just the actual gameplay here, catching all those ‘snax, isn’t quite compelling enough to match that brilliance.