Mario Kart Live is the sort of thing only Nintendo would make – and that’s brilliant.

It’s important to go into Mario Kart Live: Home Circuit with some expectations. This isn’t the next ‘true’ Mario Kart, for instance – but it is nevertheless a ‘proper’ Mario Kart, fully-featured in its own way. From an unkind perspective, one might consider it an expensive gimmick; from another, you could argue it’s a thrilling and unique distraction. In its own way, both of these things are true.

It’s a typically Nintendo thing, in truth. While its industry peers are posturing and flexing technical power and prowess, Nintendo is releasing this, which is essentially a toy. There’s been more of this lately – a crossing of their video games and more traditional toys, like the Mario Lego sets. Those are toys with a gaming twist while Mario Kart Live is the inverse – a video game with a toy-based twist.

The toy is the RC car included with the game. Mario Kart Live is built around this; there’s a camera atop the toy and a bunch of cardboard that can be folded out to craft ‘gates’ for the kart to pass through. The software, the game itself, then lets you create courses around your home. It’s a skinny little download, barely over a gigabyte, because the game is low on assets. There’s no huge levels here because you’ll craft the levels out of the world around you. 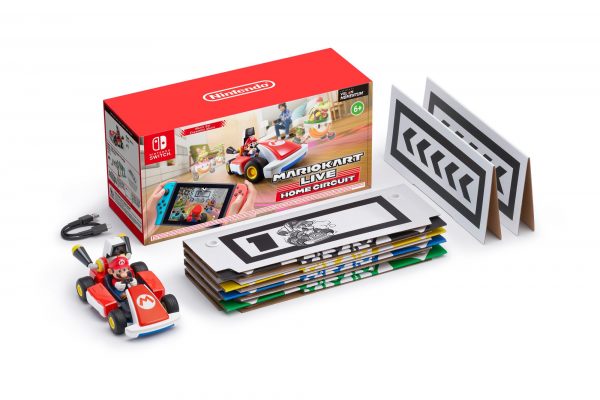 The game is all about the kart, really, and it’s a neat little piece of kit. You can get a Mario or Luigi kart currently, though that could easily be expanded in the future. They’re sturdily built and feel like they’ll take the rough and tumble of being dropped, tripped over or driven into walls well.

The karts perform best on hard floor, but they’ll work just fine on carpet. As long as you keep your expectations realistic, they’ll also handle little ramps and jumps just fine, which can make courses a little more exhilarating. It’ll run for around an hour and a half before its battery depletes, at which point you can recharge it via USB-C. It’s all solid and convenient stuff.

And honestly, rattling one of these little racers around your home is very exciting indeed. There’s that classic video game magic feeling – a very Nintendo feeling – that even the most experienced, jaded player should find irresistible the first time you see your home rendered from the kart’s perspective on the big screen as the kart zips around the course you’ve created or real just out of your eye line. 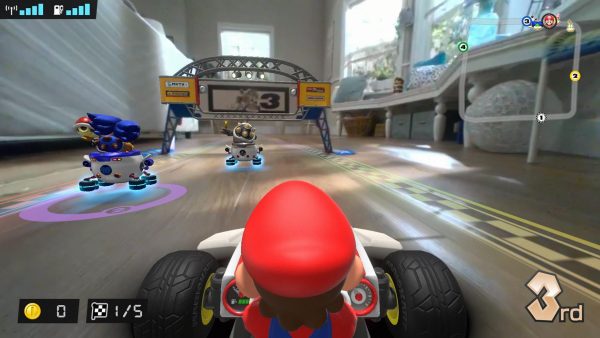 Mario Kart Live is a game that’ll give satisfaction proportionate to the effort you put in. What Nintendo clearly want is for you to not just plop down the cardboard gates provided to create a layout, but make it into an event in your home. At its best, you’ll be drafting in pillows, throws, ornaments, coffee tables and anything else you can lay hands on to create a properly-defined course. This could easily be a full weekend activity for kids, breaking out the arts and crafts stuff to create cut-out rolling mountains of cardboard for the background of your tracks and so on.

As you create and race, you’ll earn some in-game currency to spend on light customization. You also have the option to race in a few different speed classes, just like core Mario Kart. All of this takes a back seat, however, to the act of building courses and making the most of the space you have.

On the topic of space – you don’t necessarily need an enormous amount. The trailers have shown the karts meandering through enormous houses, but you can create winding, complex courses in small spaces. If you were able to, say, play a Kinect (remember that?) or PSVR in your living room, you’ll be able to find enough floor space for decent tracks. In fact, the kart isn’t really designed for whole-home adventures even if you do live in a mansion – the kart range is said to be only 15 feet, and even that seems like an optimistic measurement. 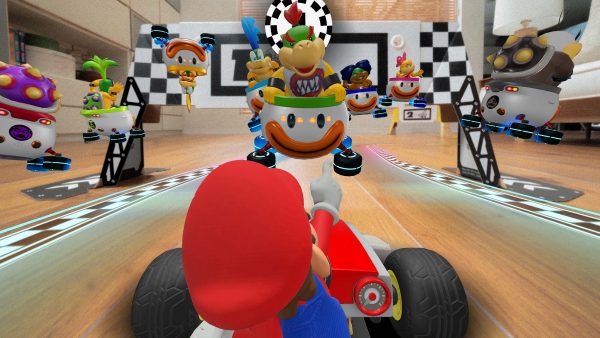 The sticking point with Mario Kart Live remains the cost. It’s £100 for the game with a kart – either Mario or Luigi – but for a second player to join the fun, you’ll need to spend that again – plus have access to a second Nintendo Switch. Up to four players are supported – the way Mario Kart was meant to be played – but that requires four karts and four Switch machines. We’re over a grand here.

So perhaps multiplayer isn’t a very realistic proposition. That’s a significant dent to this title’s allure, and yet it’s still something one can recommend – purely because that sense of magic as you race around, even against the AI, is unique and brilliant – and the sort of thing that’ll excite younger kids to no end.