Dwarf Fortress coming to Steam is an exciting development, even though we’ve known about it for a year and a half now and still don’t have a clear idea of when it’ll actually be available. Developer Tarn Adams has a new update on the Steam page that illustrates why: even though the post itself is just about stockpiles and storage, the transformed user interface makes the game look, for the first time, like something anyone will be able to pick up and play.

As anyone familiar with Dwarf Fortress is no doubt aware, the Adams brothers’ colony management game has for most of its life existed as it might have been in the DOS era, with ASCII characters filling in for walls, dwarfs, goblins, and precious mushrooms. While mods are out there to swap those out for more artistic tilesets, the Steam version is officially updating the game to have graphics, and with that comes a mouse-driven user interface.

The significance of this change is clear from Adams’ latest post, titled ‘Dwarven storage solutions.’ Using several screenshots, Adams shows off how the current in-development build of Dwarf Fortress lets players paint stockpiles using a mouse by either dragging rectangles or free-painting.

In legacy versions of Dwarf Fortress, all of that had to be done using keyboard commands, navigating the ASCII-based nested menu system that many players never got around to figuring out – it was just too frustrating. 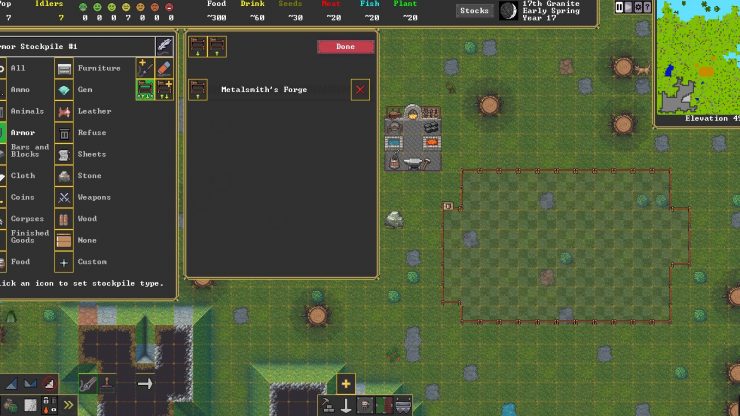 While the screenshots may look to the casual observer like standard-issue menu screens from any other building game, Dwarf Fortress veterans will immediately understand how transformative this update is gearing up to be – whenever it finally winds up landing in our greedy laps.