I really enjoyed beat-em-ups in my younger years. Upon hitting adulthood, however, I saw little value in their extremely short lengths and horribly shallow gameplay that was designed to convince people to drop another quarter into a machine. 9 Monkeys of Shaolin very clearly takes inspiration from those games, but it has depth to its combat, a decent runtime, and some surprisingly varied level design. As far as games like this go, it’s hard to do much better.

The story in 9 Monkeys of Shaolin is mostly by-the-numbers, but with a lot more exposition than one might expect. You play as a man named Wei Cheng, whose village was attacked by Japanese pirates. His grandfather dies in the attack and he vows revenge, which he seeks by joining a Shaolin order. Once he does, he shaves his head, dons some robes, and starts going by the name Daokong. But things are more complicated than they seem, and it’s up to him and his order to stop a madman’s nefarious deeds.

There’s a surprising amount of voice acting, all of which is voiced in your choice of English or Russian. The English voice acting is somehow pretty good. I wasn’t too invested in the plot but it was honestly a lot better than any beat-em-up has any right to be. 9 Monkeys of Shaolin isn’t a long game by any means, though, and can be easily completed in under five hours, which is enough time for the story to get everything squared away. Narrative is doled out via dialogue scenes with character portraits at the bottom of the screen or told in cutscenes via drawings on scrolls. It’s all competently put together. 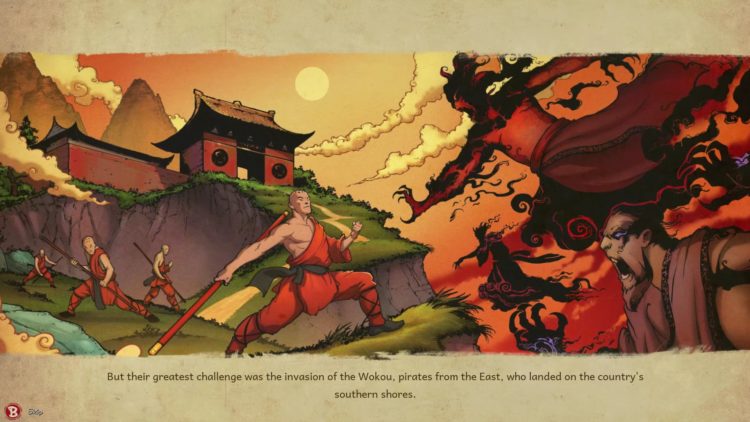 Stick it to ’em

As you’ve no doubt guessed, 9 Monkeys of Shaolin is about knocking the ever-loving hell out of dudes. Daokong fights with a staff and typically moves from left to right while handing out the beatdowns. Initially, there are only three attacks available; a strike, a thrust, and kicks that allow you to launch yourself at distant foes. You also have an extremely generous parry that can return projectiles and protect Daokong from harm. And, of course, you’ve got a dodge that makes getting out of the way nice and easy.

But that’s not all. 9 Monkeys of Shaolin has a Qi meter broken up into three sections. Each of your three main attacks can be held down to execute a stronger version. There are also three special attacks; a spinning move for hitting foes around you, a launching kick that allows you to juggle foes, and a powerful downward slam. Daokong also has three seal attacks; one that slows enemies down and heals him, another than pulls enemies in and decreases their attack, and one that suspends foes in the air.

After each level, you’ll receive skill points that can be allocated to increasing the effectiveness of these nine moves, plus a suite of perks for each that greatly increases their usefulness. The aforementioned seal that slows down enemies and heals you is particularly useful. Before getting it, you’ll need to heal by finding green tea inside destructible items. Once you have it, though, you’re going to be pretty much unstoppable. 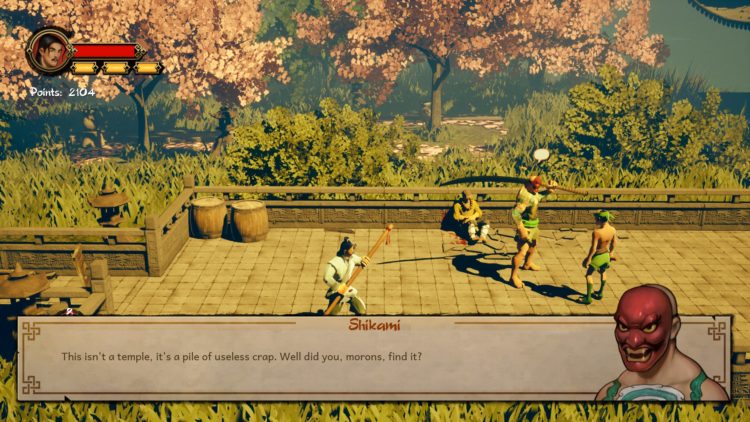 Speaking of unstoppability, 9 Monkeys of Shaolin makes you a force to be reckoned with. You’ll frequently be fighting groups of foes at once and they have no qualms in regards to surrounding you and beating you into the dirt. Before you get a feel for the game’s mechanics, it can be overwhelming. But once you get everything down and unlock more options, the game truly makes you feel like an invincible Shaolin warrior. Gracefully parrying strikes from multiple directions followed by going hog wild on every enemy unfortunate enough to be in your vicinity stays extremely satisfying for the game’s duration.

But your enemies are no slouches either. There’s a surprising amount of variety among them. There are basic enemies who don’t pose much threat, ones with guns, ninja, samurai, ghosts. There’s a little something for everybody. Some are unarmored and can be readily stun-locked, others have tons of armor and can tank some of your moves. Once you understand how all the enemies behave, there’s a really neat rhythm to juggling all of the different types. The controls are extremely tight and responsive too, making the game a joy to play through.

The levels are similarly varied. They take place in a couple of dozen different locations, such as villages, a prison, a harbor, and even a Japanese estate. And the levels themselves have different goals at times too. You don’t just walk to the right. In one level, you have to rescue people in a tower. Several have a bit of a lenient time limit where you’re trying to save someone who’s holding off an enemy assault. At one point, you escort a guy pushing a cannon. 9 Monkeys of Shaolin is full of creativity. It’s also a very good-looking game to boot. Many of the levels are packed with color and plenty of detail. 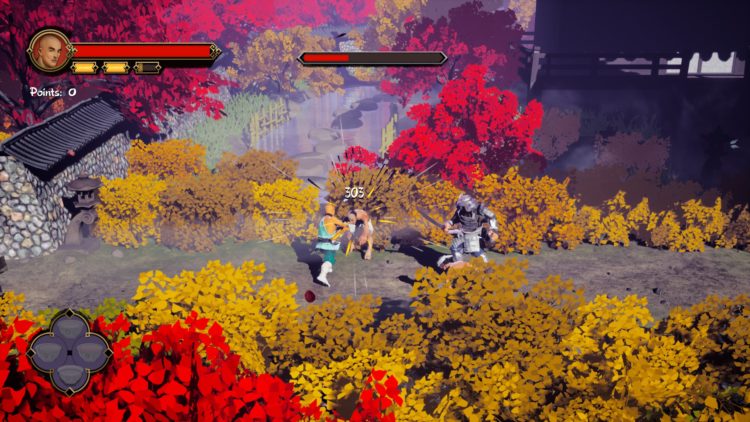 Wish there was more

The only real problem I have with 9 Monkeys of Shaolin is that I wish it were longer. If you do every level a single time, it’ll probably take about 4.5 hours to get through. But that isn’t to say there isn’t any replay value. Doing levels again will give you more skill points and each previous level can be accessed via a table in the game’s hub. Here, you can also level up your abilities, queue up co-op, or change out your equipment.

The equipment is fun to experiment with as well, as items can majorly change your playstyle. Daokong can equip beads, boots, or staves and each has unique characteristics. An early-game staff heals you when using Qi attacks and, my personal favorite, there’s a pair of boots that changes your dodge into a little dash, which I always enjoy using. There are also four difficulty levels, and the latter of these don’t give you checkpoints at all.

There really isn’t much else to say. 9 Monkeys of Shaolin is a great beat-em-up with a strong presentation, excellent combat, and killer level design. Anyone looking to beat the hell out of dudes with a staff quite possibly can’t find a game that fits the bill better. Plus, if you’ve ever wanted to levitate your foes for several seconds before watching them slam into the ground, here’s your chance. 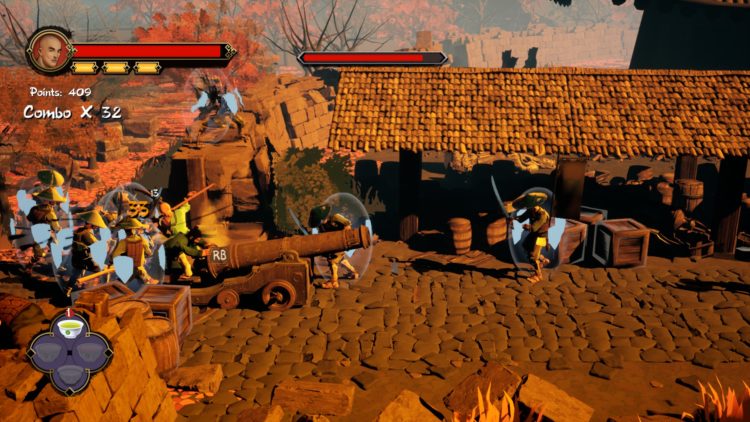