Super Mario Bros. for the NES wasn’t my first game, but it was the first cartridge I ever owned. I treated it like a sacred talisman.

In between Duck Hunt bouts, I made it my mission to memorize the ins and outs of each and every level. Eventually, I got to the end. That simplicity couldn’t have come at a more perfect time in my life.

Games have changed a lot in the last 35 years or so, which makes it tough to really dig into Super Mario Bros. 35‘s streamlined veneer. But it sure is fun in short bursts. 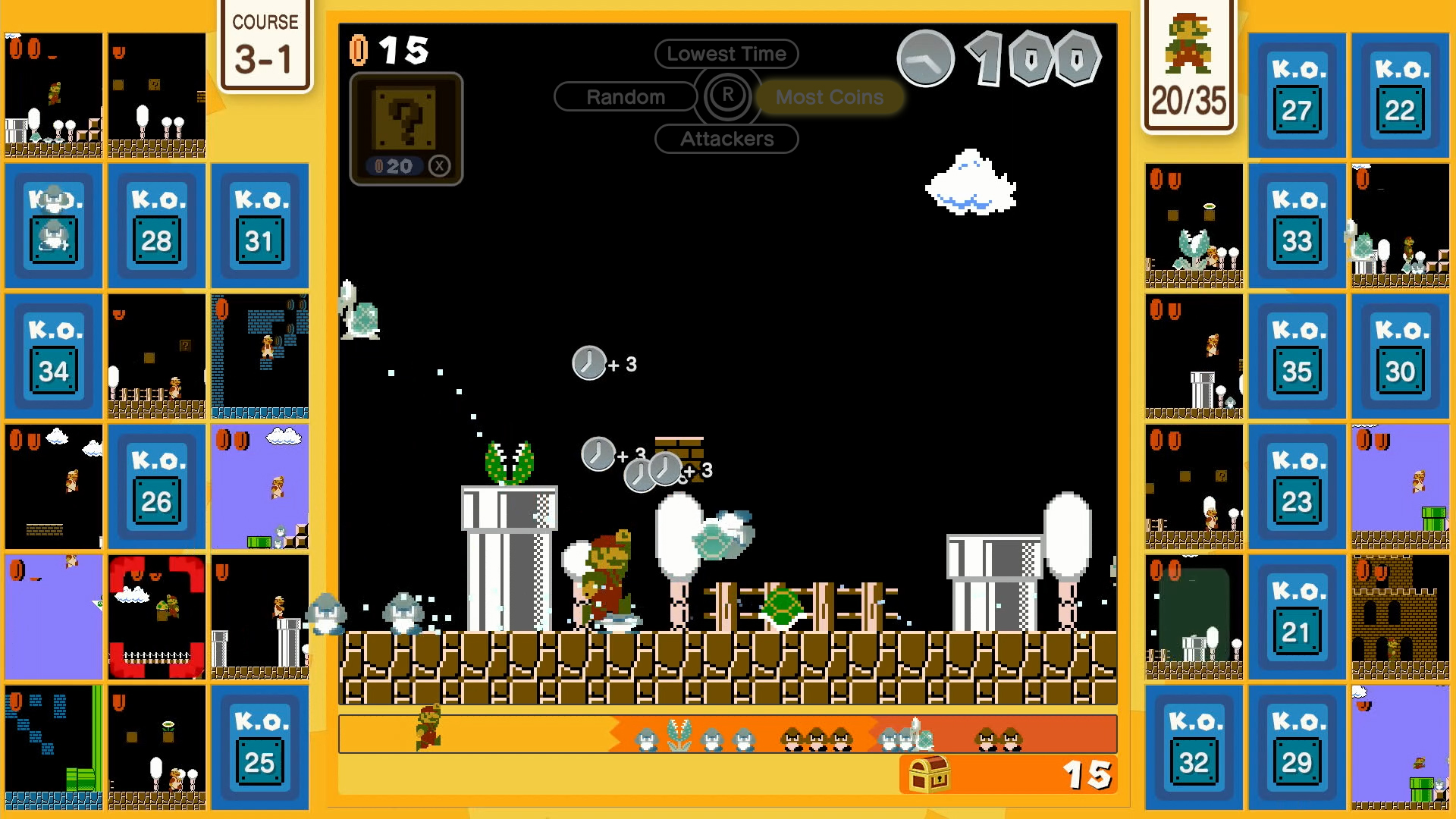 Super Mario Bros. 35 does what it says on the tin: you face off against 34 other Marios in an attempt to be the last-plumber-standing. It’s a battle royale, folks.

In a clear bid to chase the success of Tetris 99 (also developed for Nintendo by Arika), the pared-down formula sees players literally racing across levels from the original NES Mario as they collect coins and power-ups and avoid enemies until there’s only one person remaining. You’ll roam through classic Mario maps, avoiding enemies, while sending defeated foes to another screen. Like Tetris 99, you have the option to chuck them at specific players, or automatically target broad parameters of people (like the most or least successful). That’s basically the game.

The formula is a little more complicated than it seems, but eventually devolves into a state where the late-game experience is homogenized. At first, you might be wondering why you almost always start at 1-1. Well, that’s because not enough people are “voting” for different levels at the start: or they only have 1-1 unlocked as they’re a brand new player. Without a tutorial, a lot of folks are kind of lost as to what they should be doing, from anything to how levels are unlocked to the intricacies of earning more time and targeting the right people to fling hazards at.

Sometimes, you don’t want to send easy enemies to a particularly skilled foe, as they’ll just use them as fodder for more time. There is a level of skill to split-second decisions like this, coupled with the stress of actually playing Mario NES. The problem is that unlike Tetris, where raw skill often wins the day, you have too many trump cards to play at any given time.

Fire flowers are exceedingly powerful, because while they won’t earn you as much time as jumping on heads consecutively, they can get you by in a pinch if someone happens to throw a ton of hazards your way. Coin-based mystery blocks can also clear the screen (if you hit a POW block) or get you back on track, especially if you hoard your treasure for a rainy day. Part of the problem is the inherent limitations with the original Mario as opposed to, say, a later game with more power-up variety.

Once you really get the hang of Mario 35, you start to quite literally hang in there for long periods of time. If you happen to get thrown into a lobby where other people aren’t aware of any of the above nuances, you’re probably going to win. But I’ve waltzed into many, many games where myself and at least three other players are going on and on for ages like the Energizer Bunny.

It can lead to a lot of rote games where the figurative “battle royale circle” isn’t closing in fast enough. Eventually the timer counts down rapidly, so someone is going to fall out, but you can’t shake the feeling of essentially playing solitaire in the late-game as you trade hazards back and forth. At the end of the day you’re still playing a very fun, tightly-designed retro platformer, but the meta-game could stand to have higher stakes with less solutions. It hampers the long-term viability of playing for long sessions, as opposed to quicker bursts. Even a hardcore mode with some of the above suggestions would go a long way.

There’s plenty to criticize, but Super Mario Bros. 35 is a free download, so give it a shot. I’ve played many rounds already and will jump into plenty more until that fated March 2021 eShop removal death date. Hopefully Nintendo has a change of heart like it did with Jump Rope Challenge and updates the game to address some of its shortcomings: because it has even more potential than a temporary flight of fancy.

[This review is based on a retail build of the game, downloaded for free on the eShop.]