Need someone disintegrated? Get me integrated.

I really enjoy the Star Wars universe. Not to the point where I know anything about the extended universe, but I like all the movies in their own way. Yes, even the prequels and The Last Jedi. So I’m not the expert that is going to either gush or nitpick when Squadrons throws some new lore my way, but I will admit that I got rather excited when Admiral Ackbar was giving me directions. “I know that guy!” I yelled to no one in particular.

What I also really enjoy is tight, small experiences that do one thing and do it well. This basically summarizes most of the indie scene, but Squadrons also fits the bill. At $40, and with this much polish, it’s easy to find an enjoyable experience here. 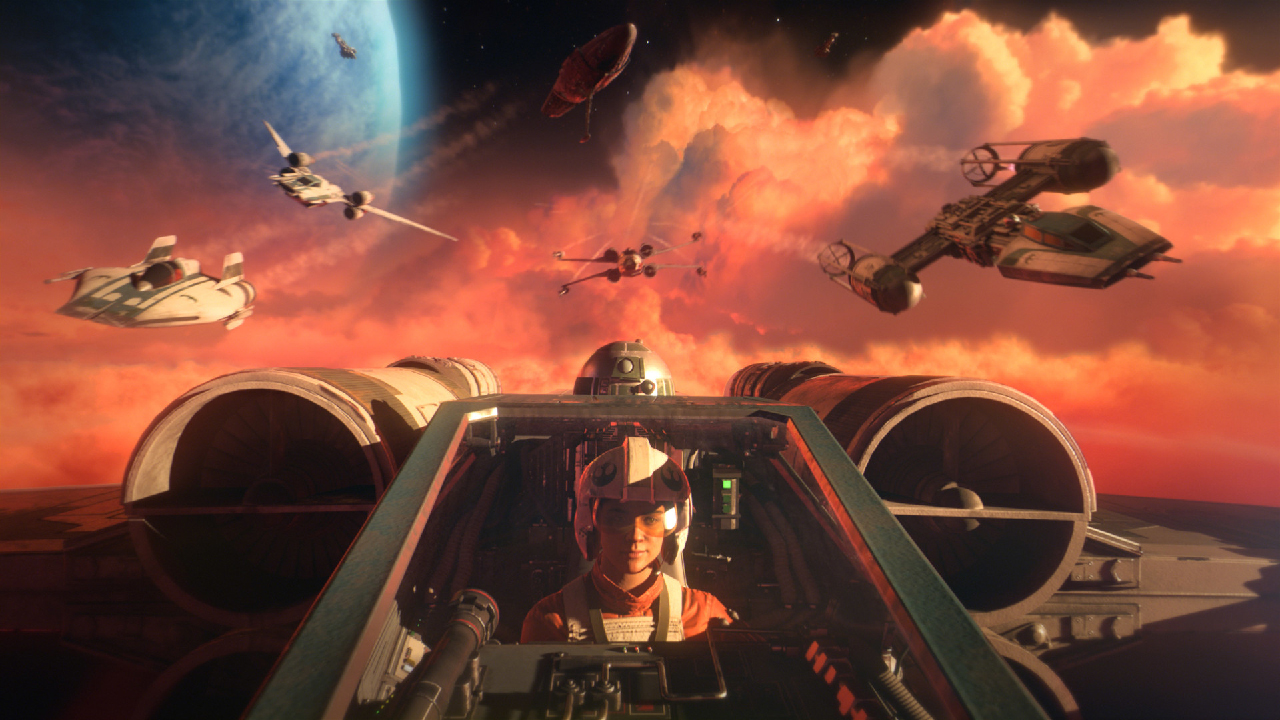 Again, I’m not here to tear this story apart because it doesn’t fit something I read once in a book about the events after Return of the Jedi. From my basic movie knowledge, everything seems to fit in just fine, and it’s really neat to explore the after-effects of the original trilogy movies and their major events. Maybe it’s because I’m not tuned in to the “extra” lore that’s out there, but hearing squadmate’s reactions to things like the explosion of Alderaan or their time in the Clone Wars was rather exciting.

It’s a bit unfortunate then that the plot of Squadrons itself is nothing to write home about. The story beats kind of fall flat or start to feel same-y, which is almost impressive given how short the campaign ends up being. Though while the events of the single-player aren’t noteworthy, there are a few characters that are certainly worth exploring more. What is here is a great introduction to the mechanics, although some of the mission objectives begin to feel repetitive.

The player has no agency here. Like, at all. Characters simply talk at the player instead of to them. It would have been nice to have some dialogue options or perhaps specific events that only happen if you talk to someone a lot. Anything to make the story feel a bit less linear, especially since, again, I started to really like the character ensemble (especially for the Rebel Alliance side).

I think the best example of my frustration with the single-player was when a squadmate asked if I wanted to play sabacc, some card game in the universe. I don’t know anything about sabacc, but I was pumped to have a mini-game type of distraction that might help me learn the characters a bit more. Nope, it was just suggested and instantly shot down, leaving me wishing for something I didn’t even know I wanted. I would love to see another Squadrons game in the future that allows for more player agency and freedom in the storyline.

To be honest, much of those comments on the story came upon reflection, because the gameplay was so tight and exhilarating that it almost didn’t matter in the moment. It’s hard to actively think, “Yeah I sort of wish this plot had more meat to it,” when you’re weaving in and out of space debris to avoid missiles and find a breach point in a Star Destroyer.

Squadrons leans into the arcade nature of predecessors like that old Star Wars: TIE Fighter game (you know the one). It finds a great balance between making the player feel like a responsible pilot and a complete badass, as the systems for diverting power or targeting other ships never overwhelm or take away from the core experience of zooming through space battles. For those looking for Microsoft Flight Simulator in space, this ain’t it. 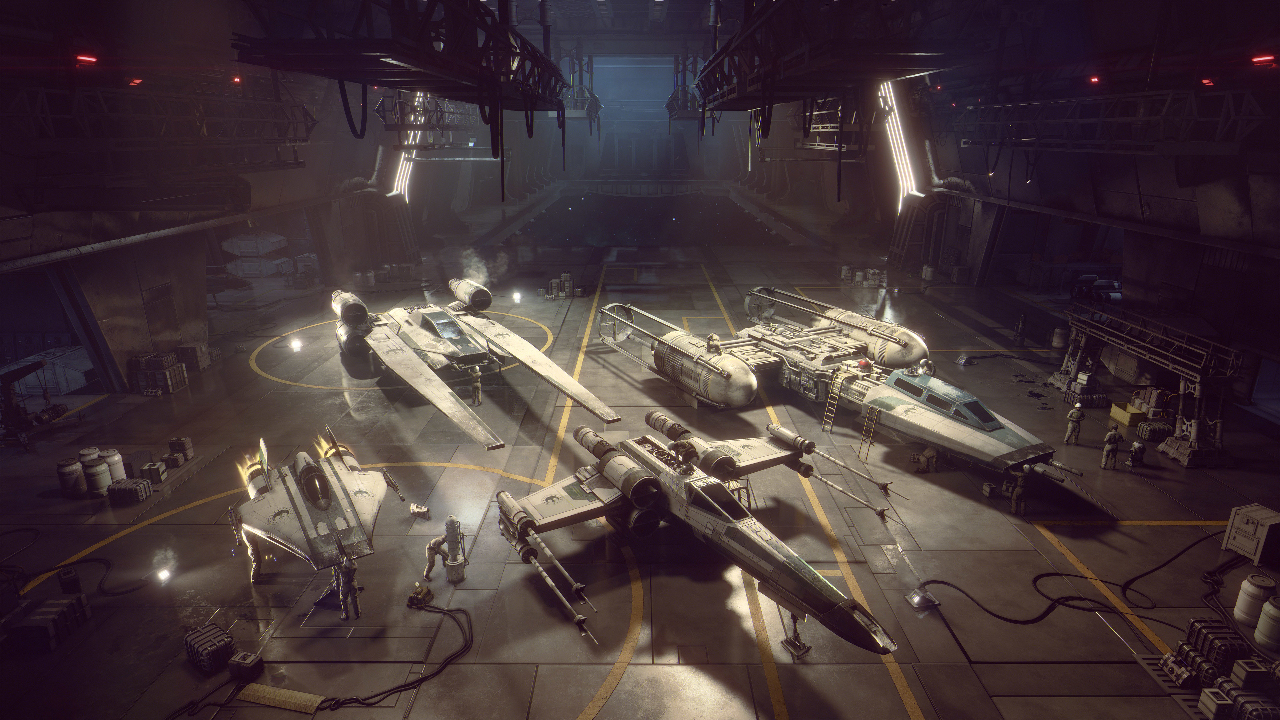 Each of the eight ships, four for each side, handles differently and has a slew of interchangeable upgrades to adjust that handling even further. Of course, the weapons can also be swapped in and out to better cater to different playstyles. Most ships have three systems to divert power to and from: engine, weapons, and shield — TIE Fighters are the exception as they don’t have shields. Diverting and balancing between systems has its uses, and it feels great to appropriately “shift gears” mid-combat as the situation evolves.

Other than the ships handling different, a special shoutout must be given to the interior of each cockpit. Sure, they feel different while playing, but the attention given to the unique interiors makes them feel different, you know? In multiplayer, they’re customizable with some trinkets (don’t worry, there are no microtransactions here), but if you’re like me and get your jollies from well-designed ship interiors, Squadrons will give you jolly-overload as your pilot reaches out to push buttons and systems start flashing when under duress.

It will take some fine-tuning of the options to get things to feel right, so thankfully, there are many options to tinker with to make the ships feel like home. Mouse sensitivity is an obvious one (for keyboard and mouse users), but options for the engine throttle and even an advanced method of diverting power are present. I’m also happy to say that there is a solid colorblind mode included for people with broken, err, different eyeballs like me. 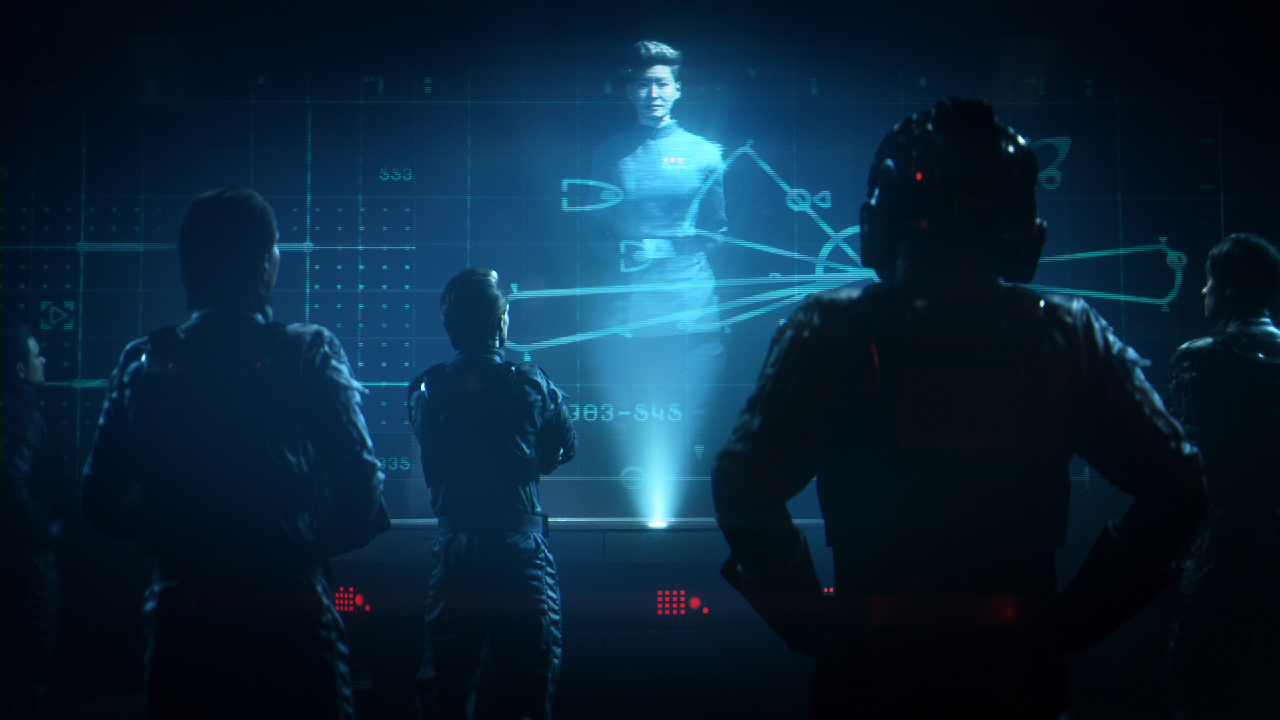 There is one thing that elevates almost everything to a whole new level, and that’s the virtual reality implementation. I tested the game using an Oculus Rift, and I almost wish I hadn’t because the game in “pancake mode” never quite felt the same again. Being able to look freely around the cockpit and spot enemies is simply unmatched in regular gameplay. For the record, it is possible to press a key and look freely without VR, but it is nowhere close to being as fluid and natural as with a headset.

There are no motion controls, so even in VR players have to resort to traditional PC controls or a controller. I preferred the keyboard and mouse still, though it took some rebinding to feel comfortable — the default mappings are a bit odd in the first place, especially for those with mouse buttons to spare. The mouse control in menus while playing in VR is frustrating and, as far as I can tell, mostly broken. While the lack of VR controls is a bit disappointing, I do feel that the lack of fidelity would ultimately make for a worse experience; the joy of Squadrons lies in its controls, and to sacrifice that would leave the whole experience feeling like a novelty.

Swapping the game to virtual reality is a bit of a headache, as both SteamVR and the Oculus app love fighting with each other, though that’s no fault of the game itself and just a frustration with the platform. The graphical fidelity, which is truly breathtaking, also takes a huge hit, but that is to be expected. The game does seem to be designed with VR in mind, as the segments in between missions involve the player standing still and simply pointing and clicking their way into conversations from crewmates and other rooms. A traditional way to handle VR rooms, but it does feel a bit odd without VR.

Regardless of the slight downsides to the VR experience, chiefly the graphics, Star Wars Squadrons is a must-buy for owners of a VR headset. I was consistently blown away by just how amazing everything felt; I never wanted it to end. Even if I played worse in the multiplayer modes, it’s still my preferred way to play because, holy crap, I’m actually piloting an X-Wing. 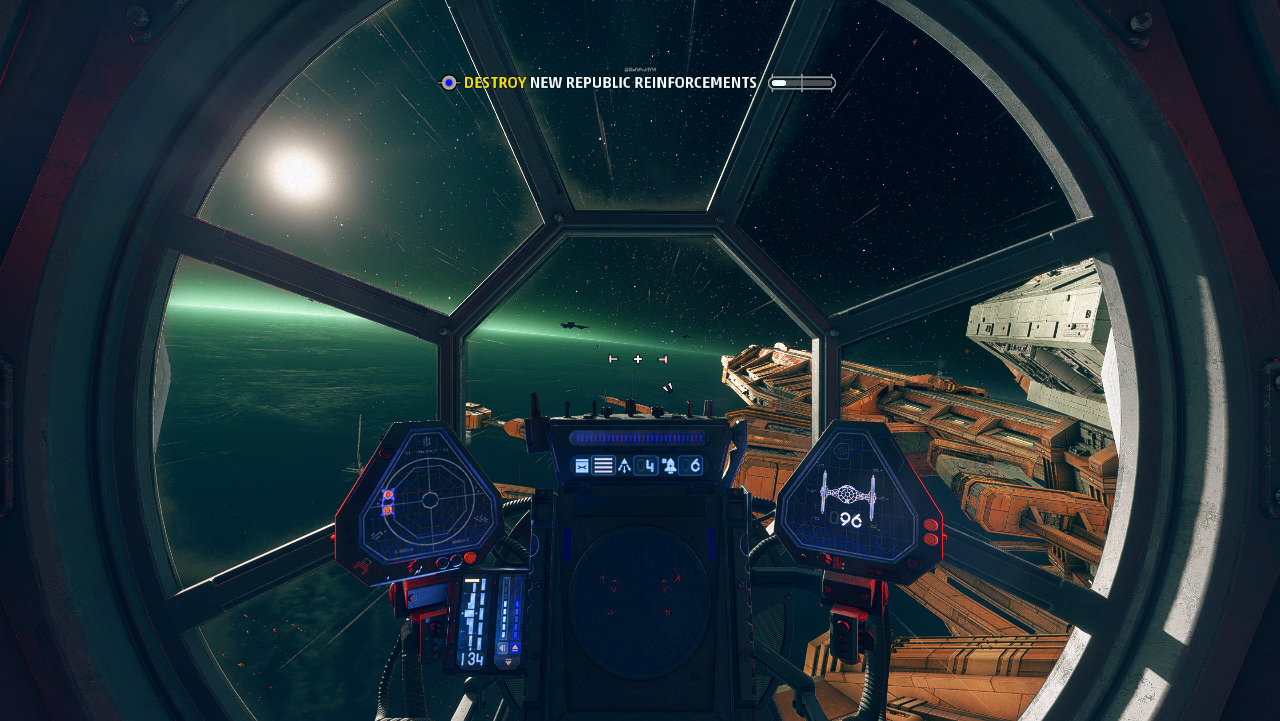 Speaking of multiplayer, there are two modes to jump into: Dog Fight and Fleet Battle. Both are rather straightforward and don’t offer anything particularly noteworthy. Dog Fight pits two teams of five against each other in an all-out brawl to see who reaches the winning kill count first. It’s simple, and will likely run its course in due time for most players, but a progression system devoid of microtransactions does a great job of keeping players coming back and looking forward to the next unlock, whether it be gameplay-related like weapons and engines, or cosmetics like paint jobs and interior decorations.

Fleet Battle is an objective-based tug-of-war that feels similar to the game modes of Battlefront. Squads take each other out to boost morale, then use the advantage to try and take out the enemy’s Big Ship (a Star Destroyer for the Imperials, and an MC75 for the Republic). There’s a surprising amount of depth for teams to experiment with, and personally, I really enjoy being able to play a support role with one of the ship classes available. I was worried that my crappy targeting skills would be a huge detriment in multiplayer, but the support role I gravitate to in just about every multiplayer game is well represented here.

When all is said and done, Star Wars: Squadrons is a truly awesome (and I use this word with the classic definition of “inspiring awe”) experience for anyone looking for an arcade space shooter. For fans of the universe or anyone with a VR headset, it’s a must-play. Sure, it has shortcomings in the single-player and it may not be as “hardcore” of a simulator as some were hoping for, but what Motive has delivered here is more than just a strong foundation. I genuinely hope they build off of it moving forward, either with updates or sequels, because it’s hard not to love everything they’ve built.