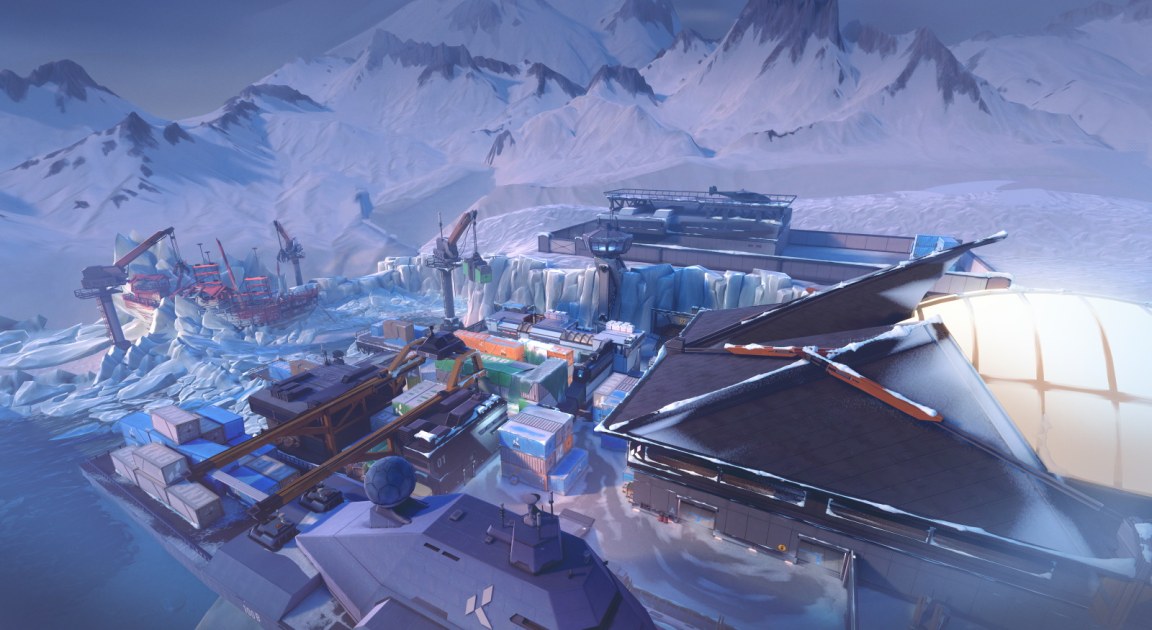 With Valorant’s second competitive season almost at an end, Riot Games has begun detailing what’s coming to its 5v5 tactical shooter on October 13th. Earlier this week, the company explained that Act III would include new leaderboards, better server selection and level restrictions on ranked matchmaking. It’s also slowly drip-fed bigger news: a fifth map and a new agent will soon make their debut, too.

Let’s start with the new map, Icebox. As the name suggests, Valorant’s fifth destination is a located in a snow biome, requiring players to plant or diffuse the spike on one of two bomb sites in a deserted shipping yard. Instead of teleports or climbing ropes, found in two of the game’s other maps, Icebox will encourage players to utilize ziplines to retain the high ground.

“Icebox was designed to emphasize skirmishes, sharp aim and adaptive play,” notes Salvatore Garozzo, Level Design Lead at Riot Games. “The gameplay premise of Icebox is that each of the sites are intended to be complex combat spaces that feature plenty of cover and verticality.”

Valorant’s 13th agent is an Australian hero named Skye, who is seen as an initiator. Skye’s basic abilities include Trailblazer, a Tasmanian tiger trinket that players can deploy and control to hunt down opponents. Once in range, clicking fire will make the tiger leap and deal damage to rival agents with a concussive blast. Guiding Light comes in the form of a hawk, which can be directed in the direction of a player’s crosshair. Like Phoenix’s Curveball and Breach’s blast abilties, Guiding Light can blind enemies from positions of safety, giving players a big advantage in a one-on-one skirmish. Skye’s Ultimate, Seekers, sends out three…seekers, which run at targets and nearsight them.

Perhaps the most useful ability in Skye’s toolkit is Regrowth, a healing trinket that replenishes the health of every hero in its Area of Effect (AoE). She can’t, however, heal herself. While Valorant features an agent that can replenish a single teammate’s health and a couple of heroes that are capable of restoring their own HP, Skye’s healing ability is unique in that it restores the health of multiple people at once — much like Solider 76 or Lucio in Overwatch. It is also linked to a meter — much like Viper’s toxins — so players will need to deploy it wisely.

Regrowth could change the way both casual and professional players navigate the game’s five maps. Quick pushes to site and prompt spike plants could be better defended with an agent that can restore health to multiple players holding various defensive angles. It’ll likely shift the meta back towards team healing, which was made less of a priority after Riot nerfed Sage’s restorative power. Skye’s basic abilities can also initiate as well as control, meaning she doesn’t always have to play behind the lines.

As expected, the Act III Battlepass will deliver many new unlockables, including gun skins, buddies, sprays, player cards and titles, as well as Radianite points. It’ll cost the usual 1000 Valorant Points (roughly $10). Riot also says that its new otherworldly skinline — Singularity — will feature “the first weapon skins that have both an equip and reload animation,” as well as “moving parts that animated on the weapon itself.” That bundle is a lot more expensive at 8,700 Valorant Points, which roughly equates to an eye-watering $90.

Riot has confirmed that the Act III Battlepass, Singularity skinline and the new Icebox map will be available on October 13th. Skye, however, will be unlocked on October 27th as Riot focuses on ensuring the new map plays as it should.

valorant, riot games, skye, icebox, news, gaming
All products recommended by Engadget are selected by our editorial team, independent of our parent company. Some of our stories include affiliate links. If you buy something through one of these links, we may earn an affiliate commission.