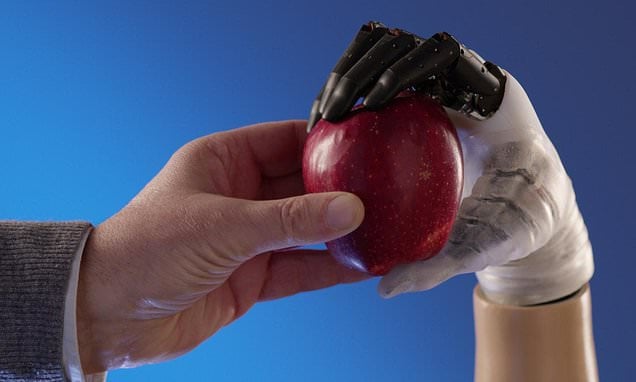 I’m a master student majoring in robotics. Grips, be they performed by a humanoid robot or a robotic prosthetic attached to a human, are one of the most important topics in robotics. There have been several proposals by scientists on how to classify grips objectively, one of the simplest is categorizing them by power and precision grips (meaning form enclosure or force/friction gripping), the shape of the object (prismatic, cylindrical, spherical, planar etc) and the number of contact points. Based on that you can for example ‘precision grip’ an apple with 3 fingers, but in reality there’s an infinite amount of joint angles and contact points in that category, some of which a robotic/prosthetic hand might not be able to achieve, but others it will. Therefore the artificial hand is able to achieve that three contact precision grip of a spherical object, even though some of the variations you are capable of are impossible for it. A more detailed system for classification might sub-divide that category further, and might be able to tell you the artificial hand is capable of 50% of grips for the apple. Another point is the objects themselves. Real life isn’t simply ‘spherical’ or something like that, there’s practically an almost endless amount of things humans want to grip. It is obviously impossible to test a hand for every object in existence. Therefore a set of objects as a representation of every day life is selected for testing. They successfully achieved 90% of the sum of all viable grip types from the used classification for all objects in the test selection. That’s what those 90% is. It is not 90% of successful gripping in every gripping scenario ever, because that is literally impossible to experimentally verify. We would have to find a paper or some publication describing their methods in detail (which I assume exists somewhere) and compare these and their results to other results of other scientists to objectively rate that result. I hope I could give you a idea how they came up with the “90%” and how objective it is, because yes, it does seem very clickbaity on it’s own and the article doesn’t really describe it in enough detail. Edit: small addition as I only saw the video after writing a wall of text. It’s not so much about putting a class on your grip as it’s describing/finding it. They used principal component analysis, which reduces the mathematical problem of finding the grip from having as many dimensions as the hand has joints into what looks to be three base configurations of hand poses in this case. Effectively reducing the problem from finding angles for each joint into a problem of “how much of each of these poses” is needed to grip. Which will not cover 100% of possible configurations, but tbf not all are sensible. Using that, their hard/software is capable of successfully gripping 90% of the tested objects.