Well, there’s at least one mode that’s decent. Oh, wait, it also has a glaring problem.

WWE 2K20 has been getting a very bad rap. From numerous bugs and glitches to the apparent radio silence from developer Visual Concepts and publisher 2K, there’s trouble in this paradise. Still, WWE 2K20 does have one saving grace and its MyCareer Mode. As mentioned in our official review, I do consider MyCareer’s narrative as a step up from previous entries. But, it does have several flaws. In this guide, we’ll help you make the best MyPlayer characters to take on all challenges and get past a few of these nagging issues.

Note: For everything you need to know about WWE 2K20, check out our guides and features hub.

First, let’s talk about MyCareer’s basics. WWE 2K20 will be the first game in the franchise that allows for two MyPlayer characters (one male, one female). Tre and Red, as they’re dubbed as you progress through MyCareer’s 18 chapters, will have a shared journey in the squared circle.

At the start, you’ll only have a handful of customization options like attires, moves, or entrances to choose from. You can unlock more of these by purchasing loot packs in the game or buying them directly using virtual credits (VC). Now, just to clarify, VC cannot be purchased using real-world cash. At least outside of the MyPlayer Kickstart DLC which adds VC and attributes, everything will come from WWE 2K20‘s MyCareer grind.

VC will come in handy for direct purchases, though it can be costly. Some costumes, moves, entrances, and the like might cost 10,000 VC or higher.

The alternative would be via the loot pack store, but the items you get are randomized. Loot packs cost tokens that can be purchased using VC. All the currencies in WWE 2K20 — VC, regular (silver) tokens, and deluxe (gold) tokens — can also be earned by way of game modes such as Road to Glory or 2K Towers. 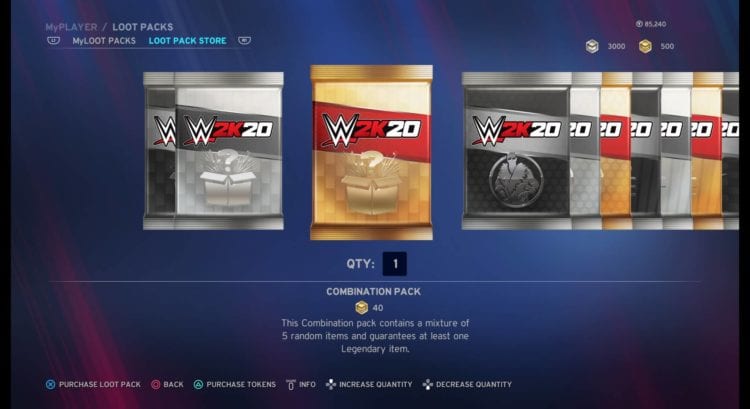 There are also additional WWE 2K20 unlockables via prestige ranks. There are five of these: Rookie, Superstar, Living Legend, Titan, and Immortal, with 25 levels per rank. You’ll need roughly 280,000 experience points to go from a level 1 Rookie to a maxed-out Immortal prestige rank.

The grind is a lot more manageable this year, so don’t worry. Try to focus on getting 5-star match ratings so you’ll end up with more exp, VC, and tokens.

Anyway, WWE 2K20 lets you pick your MyPlayer class and fighting style (more on these below). Each one has unlockable attire parts or weapons as you level up your prestige ranks. Speaking of leveling up, your MyPlayer characters will level up separately even though they have a shared story. This would depend on how often you use them in various modes and matches. 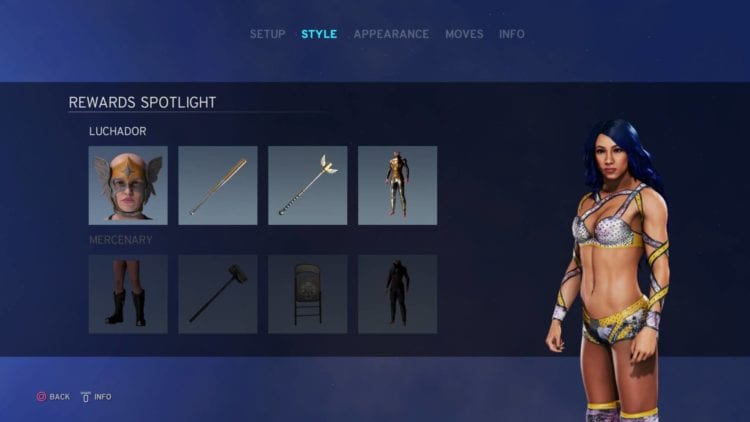 There are five main classes for your WWE 2K20 MyPlayers. These archetypes will have a couple of Payback moves already unlocked. Each class will also have two fighting styles or subclasses.

These fighting styles lean towards specific attributes, allowing you to max out certain aspects of your character. They also have their own skills/OMG moments and prestige rank-up rewards. We’ll delve into these in detail.

Note: Payback abilities are used during matches and their effects have a short duration. Taking damage from your opponent builds up your Payback meter. 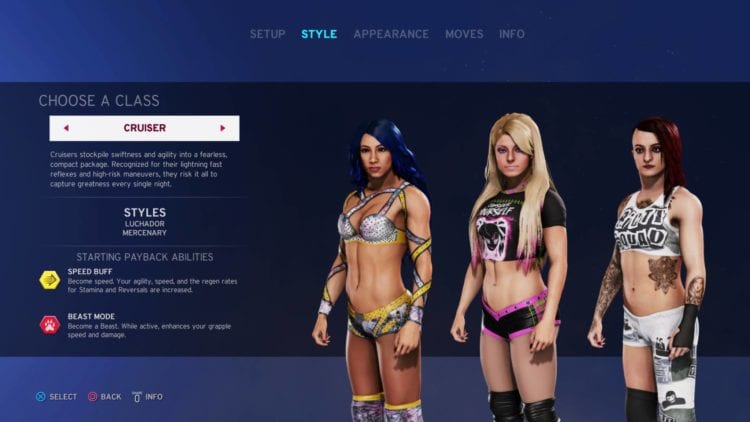 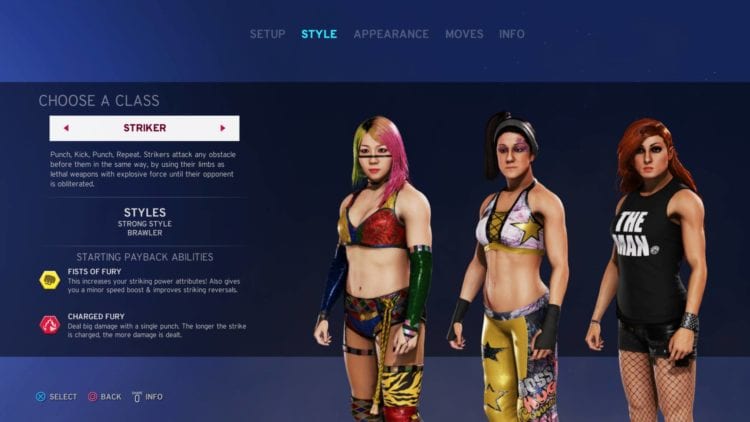 Strikers focus on hammering opponents with a flurry of punches and kicks. They also do well when fighting at ringside. 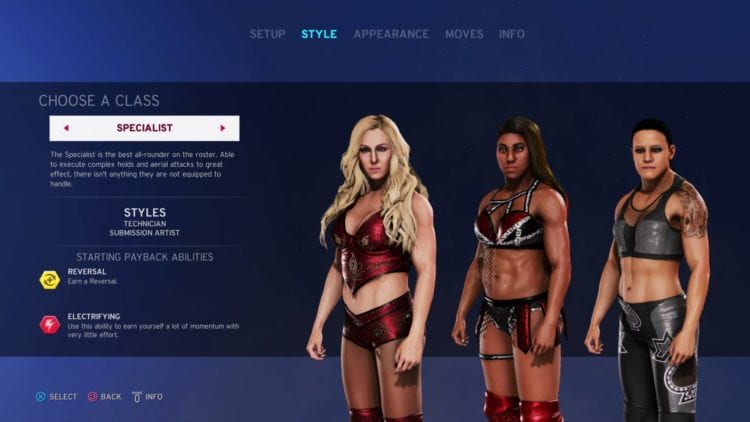 Specialists are all-rounders that can do almost everything, though they lean more towards submissions and chain wrestling. 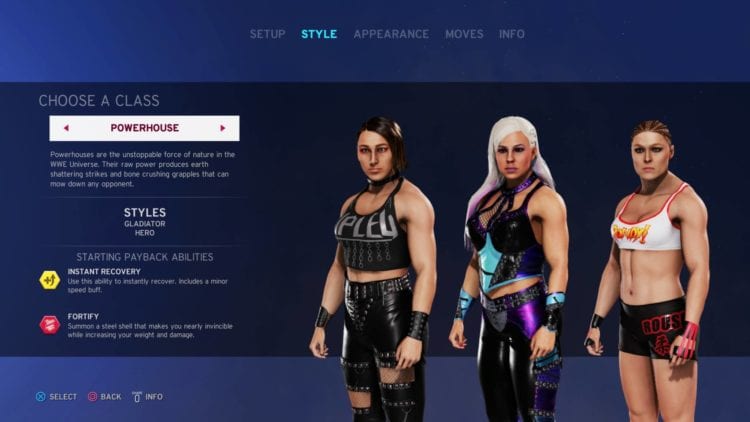 Powerhouses are your larger-than-life superstars packing a lot of muscle. They tend to have strong grapple moves. 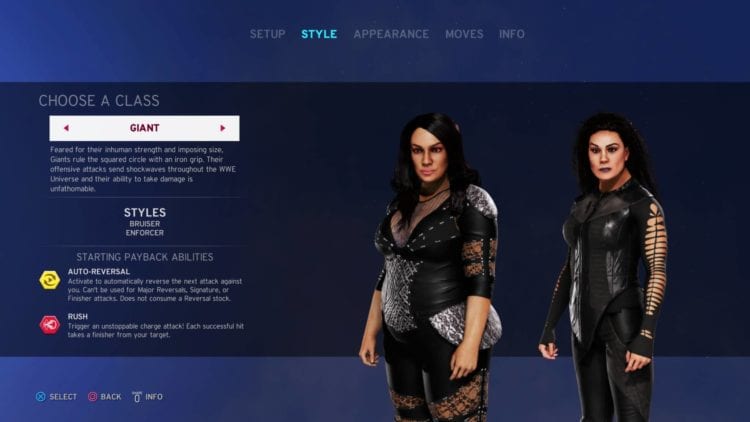 Giants have slower movement and their stamina tends to drain a lot faster. But, they do have immense strength, can take lots of damage, and most other characters won’t even be able to lift them due to the weight detection system. 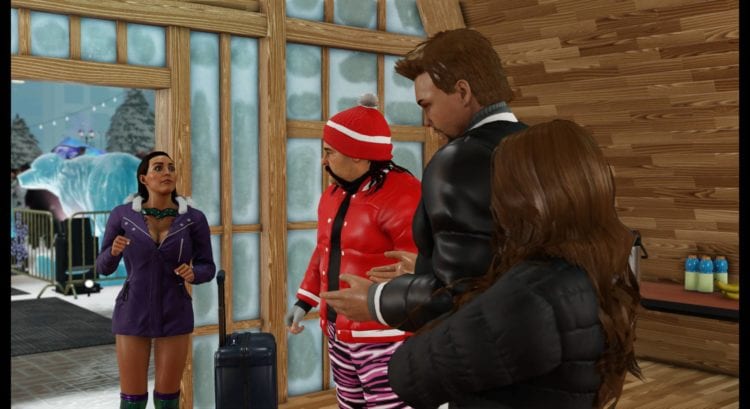 Given that each class and fighting style will have its own strengths, you could make do with whatever you prefer. Having said that, you’ll also encounter a nasty problem in WWE 2K20‘s MyCareer Mode. It’s even nastier than all the nasties booing Lacey Evans. That nasty is none other than hidden attributes in the skill tree.

Yes, I’m not even kidding. This is actually one of the most glaring problems in MyCareer. Visual Concepts wasted all that time showing potential attributes and skill progression for your MyPlayer. Then, in a ridiculous design choice, you’ll have to fumble your way blindly through the skill tree.

According to WWE 2K20‘s support page, the skill tree has been “redesigned to allow for more freedom of choice.” I took that to mean as the freedom from knowing where the hell specific attributes are. For the sake of clarity, here’s what the skill tree looks like in the early game: 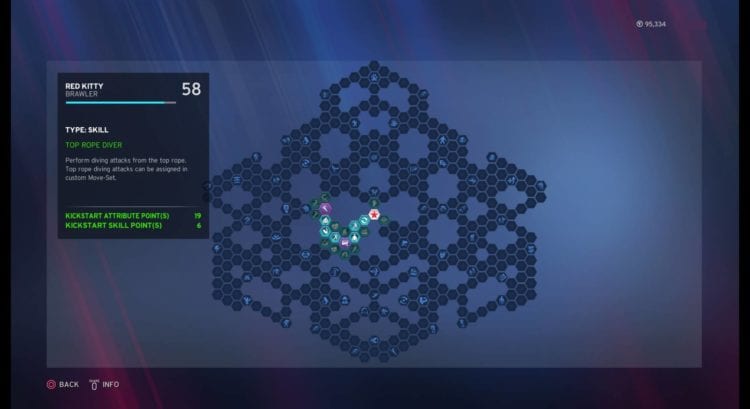 Note: All of those blank/dark blue hexes are attribute points. Like a box of chocolates, you’ll never know what you’ll get. To make matters worse (or “more unique” if we follow PR speak), each class and fighting style will have a slightly different skill tree. This means you’ll have no clue where reversals, momentum, grapple offense, and the like are located if you picked different classes for your other MyPlayer characters.

If you can get past this glaring flaw, you might find some enjoyment out of WWE 2K20‘s MyCareer Mode. As mentioned, the story has 18 chapters and each part will have several matches. Some are part of trippy dream sequences or recollections. Others are akin to regular match-ups that you’ll have as part of the storyline once Red and Tre make it to the WWE.

Some gems include a short run in Memphis where you face “The King” Jerry Lawler in a “Loser Leaves Town” match, as well as several run-ins with Samoa Joe who becomes cybernetically enhanced. There’s even a major decision that you’ll have to make, one which has dire (and hilarious) consequences for your future. It’s wild and whimsical, with many endearing and laugh-out-loud moments. 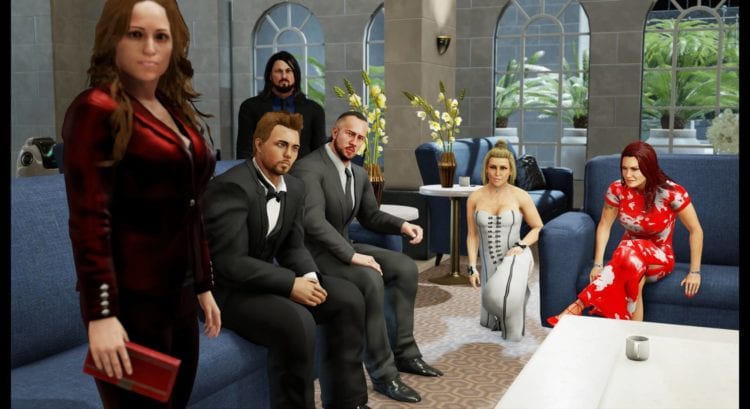 The two other modes in addition to the story are the 2K Towers and Road to Glory. The 2K Towers mode is similar to last year’s iteration. You’ll have several matches that you need to complete. Each one may have a theme or stipulation (such as TLC matches, battle royales, big head mode, fast movement, the AI having stored finishers, and the like).

Some towers are locked depending on your MyPlayer’s gender. Some are gauntlets that you can’t leave, otherwise, you’d lose your progress. 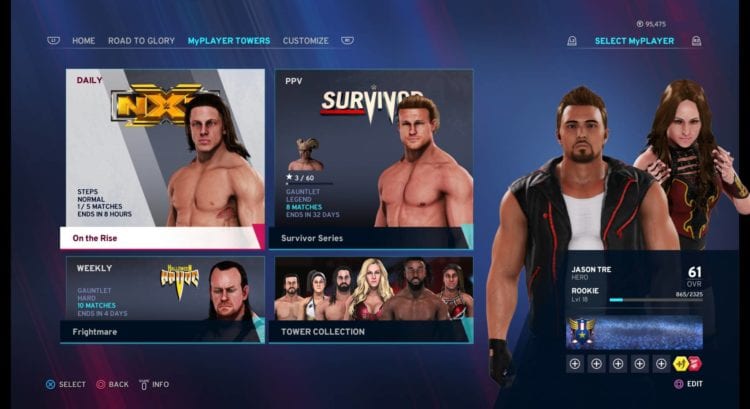 Road to Glory is the online component that lets created characters duke it out in multiplayer. You can test your skills against other WWE 2K20 owners (who are all probably frustrated at the moment). I genuinely avoid online play in WWE 2K games and this year is no exception. There have been reports of connectivity and lag issues (seen below).

Still, if you do want to partake in these matches, you can also use boosts. These consumables give you extra perks such as recharge rates or increased attributes. Boosts can be obtained from the loot pack store and you can equip five of these at a time.

(1) You don’t really need to rush and change your moveset drastically in WWE 2K20‘s MyCareer Mode. The starting moves, signatures, and finishers for your chosen MyPlayer class are serviceable until the end of the story.

(2) At the very least, try to avoid any submission signatures and finishers. Your WWE 2K20 MyPlayer characters start out with abysmal stats, and focusing on submissions won’t help out much. You’ll find the submission minigame quite challenging. Just choose high impact grapple finishers to do the job.

(3) The Pin Combo and Diving Pin Combo skills are must-haves. Several moves will allow you to immediately pin an opponent after hitting them. This lowers their chances of escaping the pin.

(4) Singles ladder or TLC matches versus the AI can be easily cheesed. While the opponent is downed, attempt to climb the ladder to grab the briefcase/title. Once the opponent has regained their senses, drop down immediately. The AI will usually climb the ladder and ignore you. Smack your opponent around and make them fall. Alternatively, let them grab the briefcase/title until only a couple of pips are left. Take them down once they’re close to completing the minigame and go for the win quickly.

(5) Battle royales/over-the-top-rope challenges are also fairly easy to cheese. Keep striking your opponent until they’re leaning against the ropes, or use the Hammer Throw skill to send them flying. Run up to them and do a clothesline or dropkick to send them out of the ring.

(6) Tables matches can take slightly longer. You’ll need to position a table and damage your opponent as they’re leaning against it to lower the table’s durability. That’s the only time that a regular move will cause it to break. There are other alternatives such as (a) equipping the Table Finisher skill and using that type of finisher, or (b) positioning a table at ringside close to the apron, getting an opponent to lean against the ropes, and doing a running attack to send them crashing to the outside. 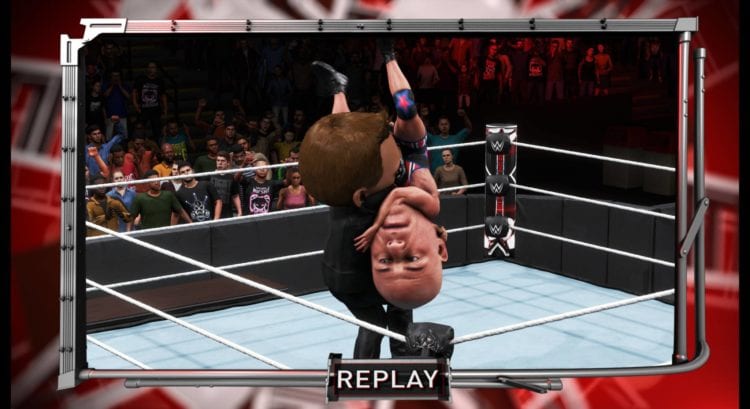 That does it for our WWE 2K20 MyPlayer and MyCareer guide. WWE 2K20 is available on Steam. For more information, you can check out our guides and features hub.