NBA 2K20 is finally available. The yearly iteration of the basketball franchise is here and it comes at the heels of a controversy. Last week, internet users discovered that NBA 2K20‘s MyTeam mode might have a gambling mechanic. That also led to an official response from PEGI. But, that’s neither here nor there. That issue is best addressed in our official review.

For this technical review, we’ll be taking a look at the various gameplay, controls, and graphics options for NBA 2K20. We’ll also check the game’s performance and graphics comparisons. First, let’s take a look at the system requirements via its Steam store page. 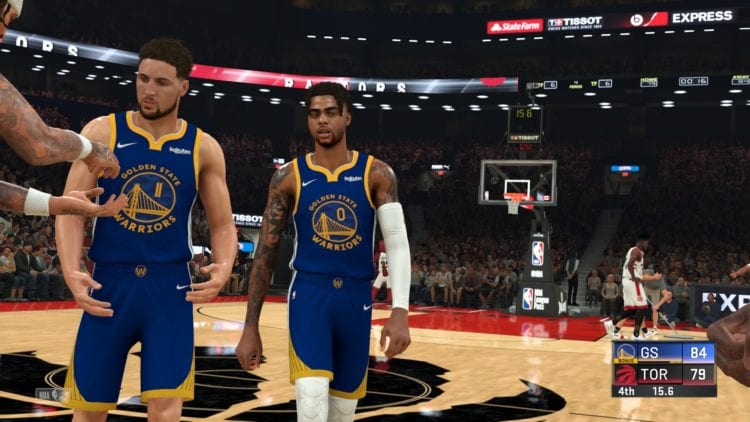 Ultra preset: Klay is such a good guy! (Patiently waits for Reddit gold.) 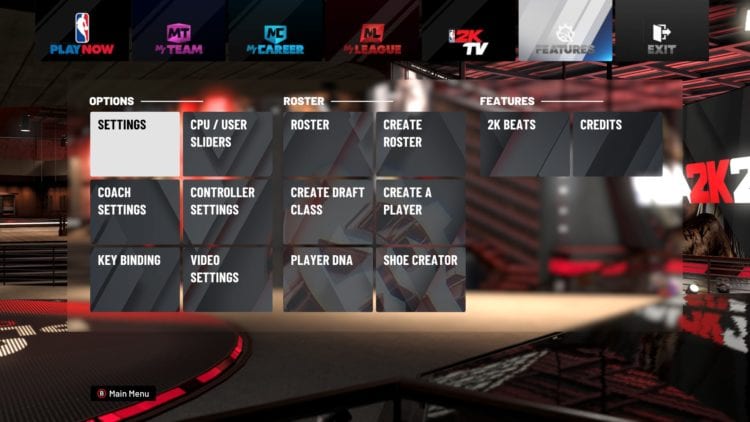 NBA 2K20 has loads of gameplay and graphics settings to check out.

As you can see, I’m well above the recommended specs for the game which should lead to improved performance and visuals. However, that’s not the point. What’s more important to note is that the franchise’s system requirements haven’t changed as much since NBA 2K17 which came out three years ago.

You can consider that as something that’s helpful especially if you have an older rig and you still want to play this year’s NBA 2K game. Unfortunately, and what’s more noticeable, is that the graphics and engine will still eerily look similar to past iterations. I know we’re talking about the same visuals and formula, but the NBA 2K franchise clinched a three-peat before the Golden State Warriors ever could!

You’ve got quite a number of graphics options to choose from and tweak. The graphics settings, in general, would let you set the resolution, monitor refresh rate, v-sync, and your presets (low, medium, high, and ultra).

When you check the advanced graphics options, you’ll find the detail settings for textures, players, crowds, shadows, and even for the media people. Additional options include temporal anti-aliasing (TAA), depth of field (DOF), ambient occlusion, motion blur, bloom, and reflections for the floor and mirrors in the game. You can also tweak the buffer count and shader preload.

Overall, you’ve got a number of settings that you can change in one go via presets or you can customize each one to your liking. 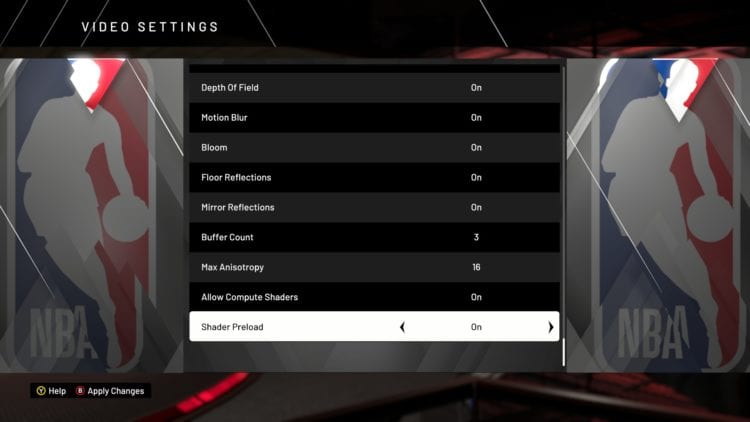 For this section, I’ve taken several screenshots during two matches, both involving the NBA Finals 2019 rivals — the Golden State Warriors and the Toronto Raptors. The latter won the championship (much to my chagrin).

You can only change NBA 2K20‘s graphics options while on the main menu, not during a match. In fact, changing the texture details also requires a restart.

I’ve tried to capture images using the same angles or positions as best as I could. The first game had me playing using the ultra preset and the second one had the low preset. As usual, click on each image for a larger view.

The major difference when it comes to textures would be that the low settings will noticeably have sharper or blockier character models. The visuals don’t look that bad, but they will definitely seem outdated (think PlayStation 3 or Xbox 360 era). Floor reflections and crowd detail differences are also readily seen.

Shadows are also more noticeable and are striking using the ultra preset compared to the low preset. You can even see this in the images for Stephen Curry’s post-quarter interview scene.

The colors and models are also more vivid using the ultra preset as you can see from the Warriors vs. Raptors screenshots and the “Inside the NBA 2K” moment, change of clothing notwithstanding. Unfortunately, it doesn’t seem like changing your graphics options would prevent Shaq’s eyes from looking dead inside. 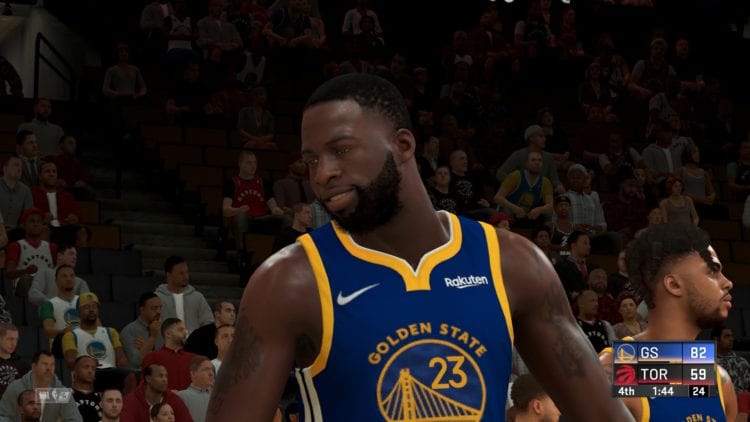 Low preset: Draymond’s smiling after being ejected… because why not?

NBA 2K20 runs smoothly on my machine. It’s as smooth as the Golden State Warriors’ transition from one end of the court to the other, provided that they don’t botch their offense.

Although there’s no in-game benchmark tool, I did enable Steam’s FPS counter. With the ultra preset and v-sync disabled, I was hitting 90-100 FPS and it was nothing but net. When I switched to the low preset, I was getting 130-140 FPS.

You are notified that NBA 2K20 runs best when you’ve kept the default settings: 60Hz refresh rate and v-sync enabled. This happens whenever you close the graphics options panel every single time.

Do note that I haven’t experienced any major issues such as screen tearing or stuttering. You’ll experience screen shakes to simulate the crowd’s roar when you’re taking free throw shots, but that’s an in-game mechanic.

The only jarring example I can think of in terms of visuals and character models would be the clipping that can happen during post-game interviews. For instance, if your player’s being interviewed at courtside, another player might walk into view and you’d end up seeing the interior of the character’s model. This happens infrequently though. 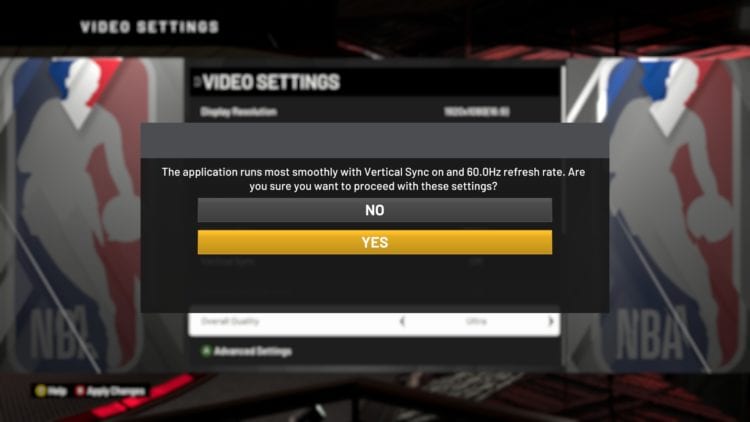 Yes, I know. You don’t need to remind me every single time!

NBA 2K20‘s gameplay and audio options can be found in the same panel, the generically-named “settings.” Herein, you’ll spot the usual stuff such as the game’s difficulty, quarter length, speed, fatigue/injuries, replay frequency, and more.

As mentioned, the gameplay settings panel has the audio options. You’ll find language settings and volume levels of the commentary, PA system, sound effects, crowd chants and murmurs, and player chatter. You can also check your email address here and choose to opt-in/opt-out for NBA 2K20-related emails (if there are new daily challenges, roster updates, events, and more). Naturally, I chose to opt-out because I don’t need all those messages. 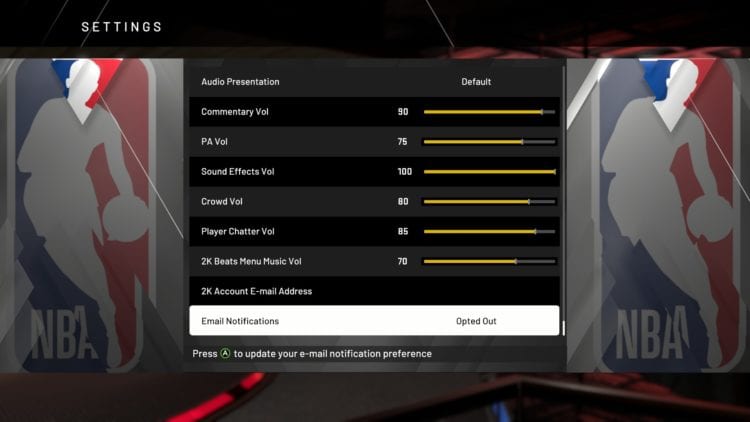 The audio settings are also in the same panel.

You’ll find the game’s soundtrack via the 2K Beats panel. There’s the main playlist which has around 50 tracks and three separate playlists depending on the artists. 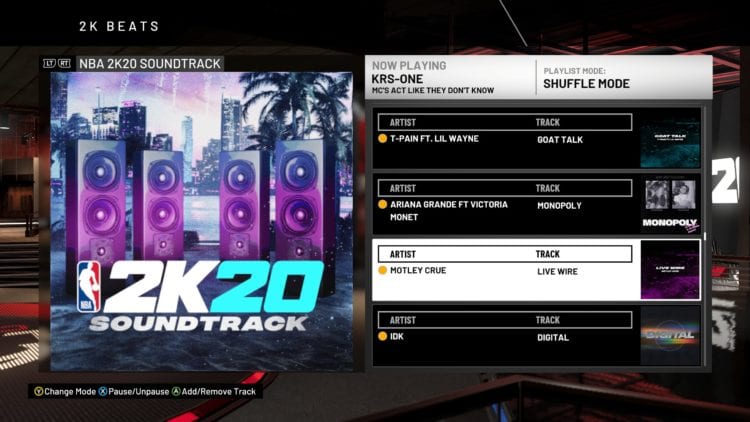 I’m not an expert when it comes to today’s music so I’m not familiar with most of the artists. At least I see Motley Crue in there and, uh, Ariana Grande.

As expected, you’ll still have more options to tweak so you can customize NBA 2K20 to your liking. The CPU/user sliders panel will let you change the success rate or frequency of your moves from shots, dunks, passes, steals, handling, player stamina, and more.

Each slider can be customized depending on your tastes or you can just use the default difficulty presets (Rookie, Pro, All-Star, Superstar, Hall of Fame) with their own values. Again, like in past titles in the NBA 2K franchise, you’ll know that these settings have been around for years. 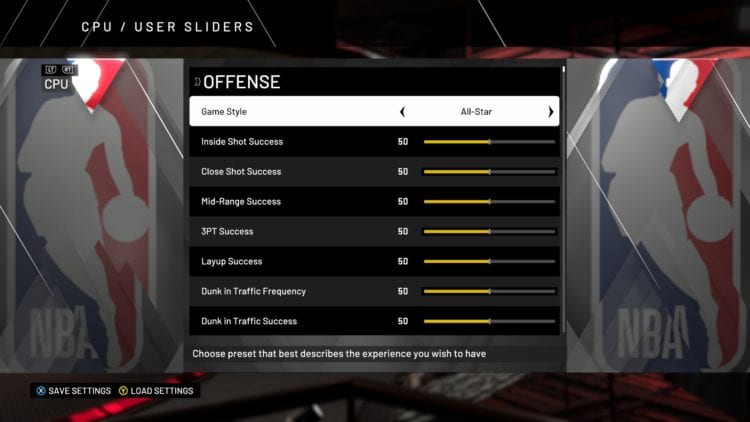 Sliders to make your life easier (or harder).

Coach settings are also there for you to fine-tune what happens under the hood while you’re playing a match. By default, timeouts and substitutions are automated and are likely dependent on player fatigue or the needs of the team. Even late-game fouling is automated especially if the game comes down to the wire.

Playcalling, by default, is manual and user-initiated via the D-pad. PlayVision can also be toggled especially when to run dazzling ball movement with full diagrams or just a lite version. 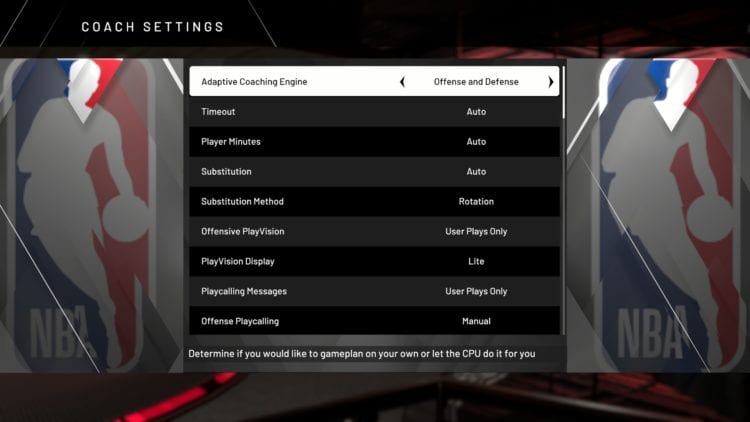 The coach settings panel has tweaks for playcalling as well as automated or manual timeouts and substitutions.

For your controller settings panel, you’ll have a lot of options to tweak such as gamepad vibration, shot meters, free throw timing, pick-and-roll and double-team reactions, pass targeting, and pro stick controls.

In my case, I usually preferred turning the shot meter off since I dislike looking at additional bars on my screen. But, if given a choice, I’d usually go with the “by feet with splash” setting which shows a semicircle meter underneath your character’s model. I kept the pro stick options to their default settings. There’s no point in changing the pro stick’s orientation from “absolute” to “camera relative” since you’d just get turned around and confused if you’re using the more dynamic camera cuts. 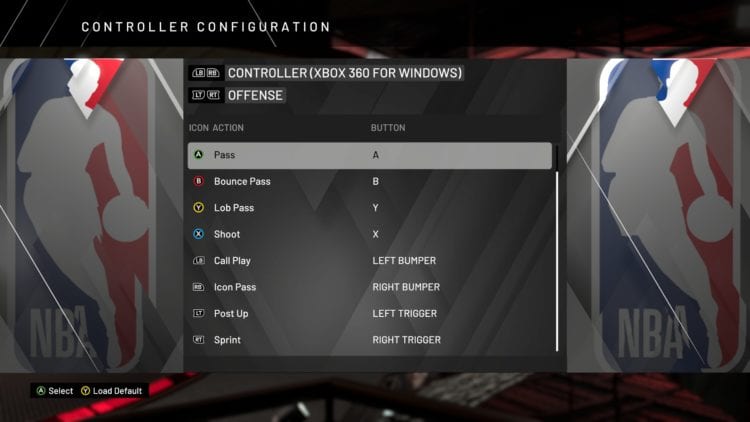 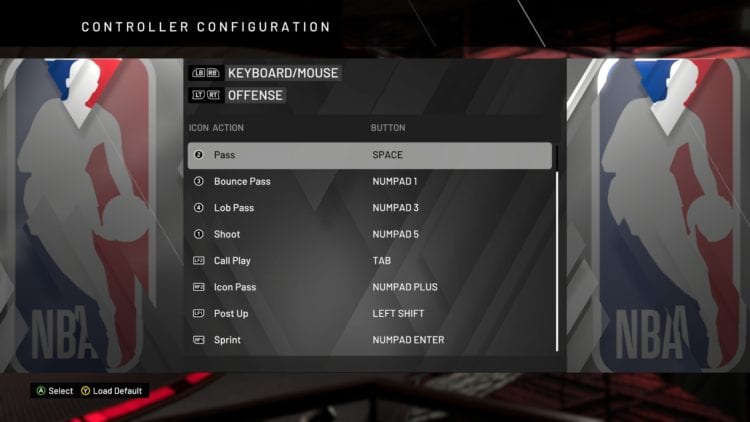 You can also customize your keyboard bindings and gamepad layout. Want to move using the right thumbstick instead of the left one, all while having your pro stick moves on the d-pad? That’s super weird, but that’s your call.

Also, let’s make this very clear: You don’t want to play a sports game using a mouse and keyboard. It’s just not ideal and everyone knows that. NBA 2K20 (and the entire NBA 2K series) would be no different. Just take a look at the default gamepad controls and the keyboard binds for player movement and pro stick functions: 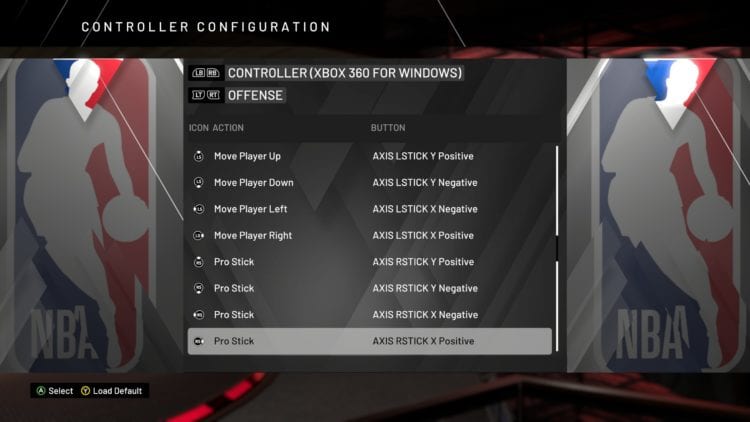 Ah, the gamepad — the best way to play a basketball video game. 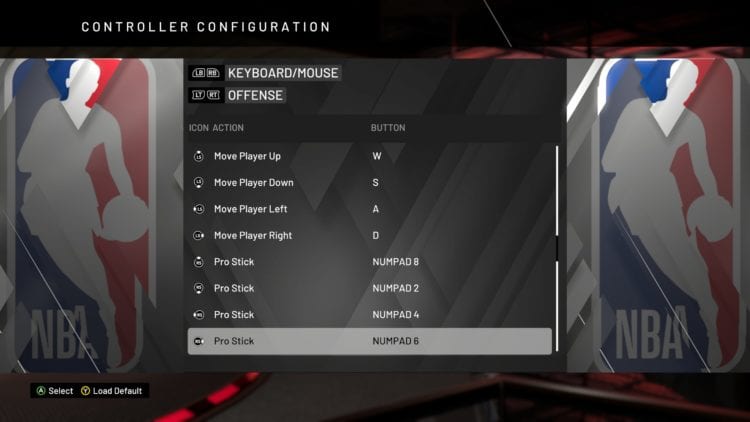 And, of course, the keyboard — the best way to lose a basketball video game.

In terms of visuals and presentation, NBA 2K20 still provides a stellar outing for the long-running sports franchise. You’ve got dynamic scenes and camera cuts, player interviews, media assessments, NBA 2K TV, and more. You’ve got a plethora of settings to tweak and customize to your liking as a way to hone and perfect your skills.

You might notice minor changes from a technical standpoint via controls and animations which are more fluid, with the dribble size-up and defensive reactions that feel more realistic than prior iterations. Also, local co-op is still here and you can have a quick two-player match with one fella using a gamepad and the other one losing via keyboard. 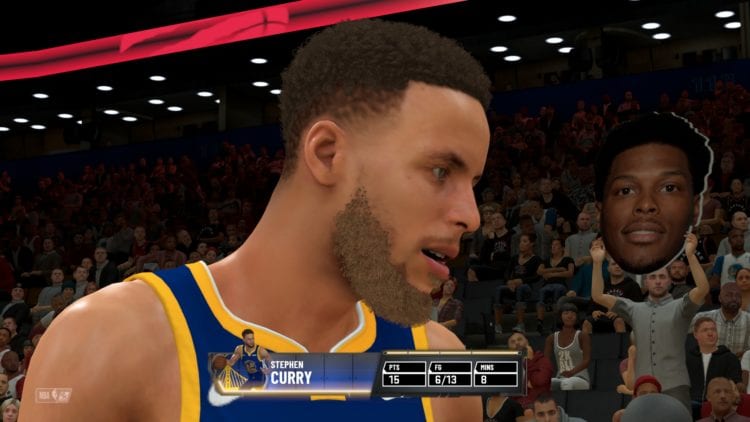 Low preset: Yes, Steph still looks like a superstar athlete. The crowd? Not so much.

Of course, NBA 2K20‘s biggest drawback, as mentioned, is that the graphics and engine haven’t really been upgraded for many years now. The developers are still using the same old system requirements from three years ago despite numerous advancements in GPUs. Likewise, many of the aforementioned gameplay settings have been around for several games now so you’re not seeing anything new.

We’re not likely to find a major jump in terms of visuals and features until a year or so down the road. Maybe that’s when the Warriors end up winning another NBA championship? Ah, who am I kidding? Lebron and the Lakers will probably do that first and we’d see hell freeze over. 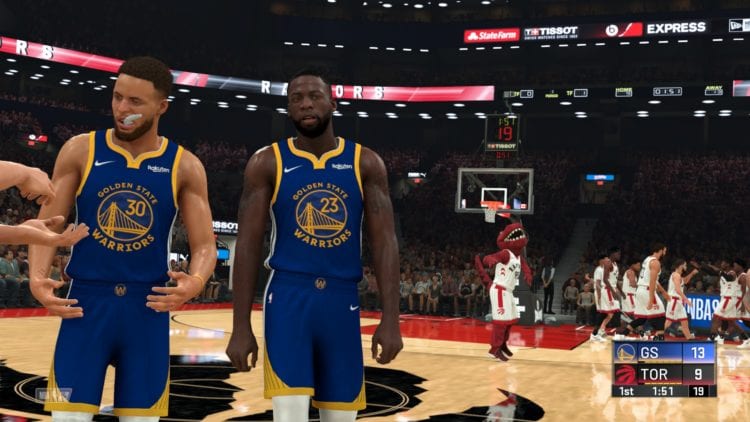 Ultra preset: By the way, I hate that dinosaur. Yes, my “disappointment preset” from last June’s NBA finals loss would be an “ultra” as well.

NBA 2K20 is available now via its Steam store page. We’ll have an official review that’s forthcoming, so stay tuned for that as well.