Role-playing games and dark fantasy go together like bread and butter. Or swords and sorcery. Or a sweet roll and a pickpocket. Sin Slayers: The First Sin combines dark fantasy and RPG elements along with pixelated graphics and a turn-based combat system. There are sins to slay, randomized lands to explore, and NPC characters to disappoint. You are the slayer of sin, and your job is to travel the world and, well, do just that.

Seven Sin Lords control the cursed land of the Valley of Fallen Sinners. You, a hero of the region, have unfortunately died, which is a bit of a bummer. But you have a second chance. In Sin Slayers: The First Sin, you fight not just for the world, but for your right to return to the living. There are seven treacherous worlds to traverse, and within are seven seals that must be destroyed. Yes, there is a “seven deadly sins” theme going strong in the game. I noticed it, too.

The game employs turn-based combat, narration, and randomized locations. Combat appears to be the classical variety, where your team takes turns attacking and using abilities against foes. You fight these beasts in randomly generated levels full of monsters and loot. Enemy difficulty, however, is based on how you drive narration in the game. There will be plenty of NPCs offering quests and dialogue options throughout. Depending on your choices, you can rack up Sinfulness. The higher your sins, the more difficult the enemies you face. 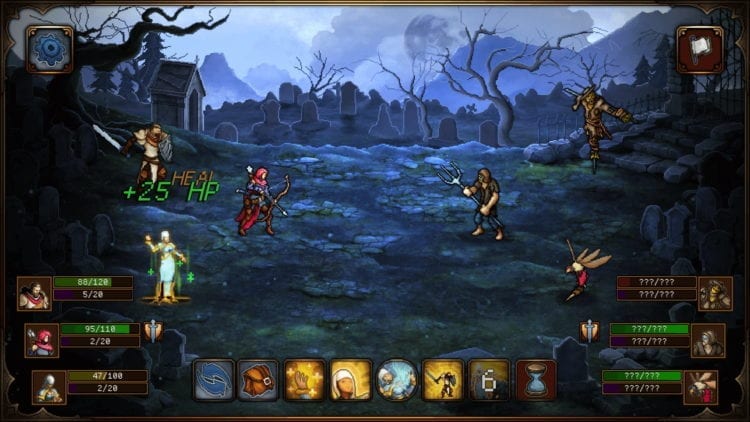 You don’t want to be bested by the pitchfork-wielding village idiot, so keep your sin low.

Sin Slayers: The First Sin is not just about killing beasts and baddies. You have a party to build, and your planning skills matter. With 10 character options, you choose and create a party to lead against the forces of darkness. In the game, you create your vanguard that offers you an advantage over monsters and bosses, lest you get wiped out. Your allies become stronger through the abilities tree, which allows you to build a fighter of your own design. You can also create equipment for your team, ranging from armor to enchanted goods and magical concoctions.

Sin Slayers: The First Sin will slay the sin on PC via Steam and the Humble Store starting Sept. 5. If you’d like to get a taste of the game early, a demo is available on Steam.