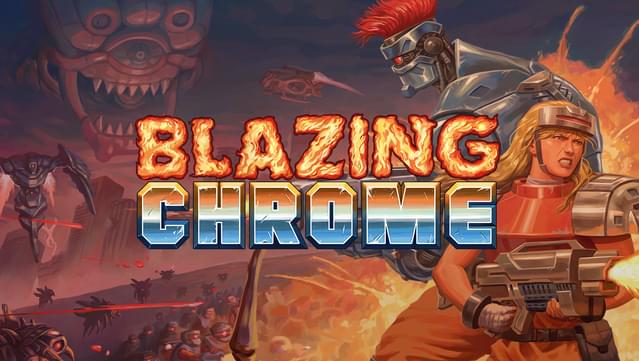 Blazing Chrome is a game that I became aware of and have been following on social media for quite some time. It immediately invokes shades of the 16-bit Contra titles, a similarity that it wears proudly on its sleeve, and it immediately captured my attention as a big fan of these classics. With its recent release and immediate availability via Xbox Game Pass, I was finally able to try the game for myself. Is it a worthy successor to the classic run ‘n guns we all grew up with?

Developed by JoyMasher and published by The Arcade Crew, Blazing Chrome is a side-scrolling run ‘n gun action game that takes heavy inspiration from Contra and Metal Slug. Released on July 11, 2019 for PC, Xbox One, PlayStation 4, and Nintendo Switch, the game was met with mostly positive critical reception. The game is already considered a financial success considering the short time since its release, and it has been generating quite a bit of buzz through many publications.

Blazing Chrome places you in the middle of a resistance movement in a future where machines have taken control of the Earth. In broad terms, the gameplay is familiar enough: you run ‘n gun your way through six side-scrolling levels shooting everything in your path, and the core gameplay mechanics feel great and satisfying. There are a couple of vehicular segments that help change things up a bit, including a pseudo-3D flying stage, and of course the entire game is playable in 2-player co-op. Frantic action with one-hit deaths means the game can be quite difficult, but there are multiple checkpoints in each stage where the game will place you upon using a continue, so it never feels too punishing, and there is also an easy difficulty setting if things get a bit too rough. 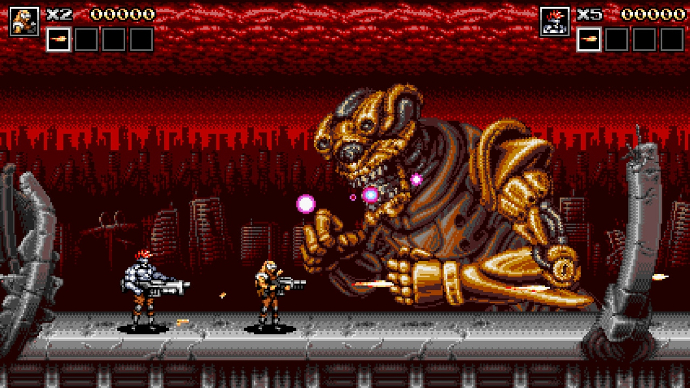 In addition to the standard machine gun, there are three additional weapon power-ups to collect: a grenade launcher that fires in an arc, a laser cannon that can be charged for a more powerful attack, and a beam that functions almost like a whip. Similar to the 16-bit Contra titles, these different weapons can be swapped on the fly once they are collected, but the currently equipped weapon will be lost upon death. Personally, I didn’t get much use out of the special weapons other than the grenade launcher and mostly just stuck with the standard machine gun, and I would have preferred if there had been some more familiar weapon types such as a spread shot. There are also three bots that can be collected that will aid the player through the game, or at least until death: an attack bot that fires whenever you attack, a defense bot that lets you take two additional hits before dying, and a speed bot that allows you to move faster and perform a double-jump.

Melee attacks can also be utilized when close to an enemy, and these are executed automatically when the attack button is pressed a la Metal Slug. There are also a few large mechs that can be piloted which is also reminiscent of controlling the tanks in Metal Slug. The player can go prone by holding down, and a roll can be executed by pressing the jump button while prone, and this can be useful for avoiding enemies and projectiles. Holding one of the shoulder buttons will lock your character in place and allow for some precision aiming, and this can be useful given the right context.

The only complaints I have are the aforementioned alternate weapons, and that it is easy to accidentally perform the roll mechanic when you are trying to shoot downward and jump at the same time which can result in some unnecessary deaths. The developers have stated that they are working on a patch that will include some other options for the roll command however which should alleviate this issue. I have also heard some complain that the game is too short and light on content, but personally I think it is fine for this style of game. There are unlockables that you can acquire after completing the game, including a boss rush mode and a mirror mode, as well as two unlockable characters. The unlockable characters control quite a bit differently from the two standard characters and reminded me a bit of playing Power Blade for the NES. 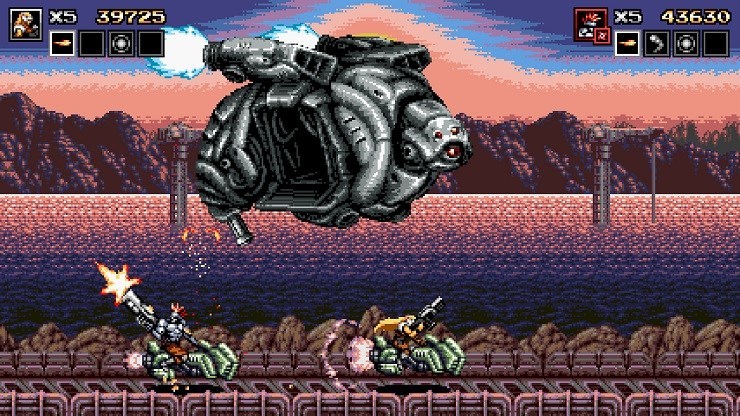 The game’s presentation is great also. The premise is an obvious nod to The Terminator series, and the few cutscenes in the game look similar to the grainy FMVs from the mid-90s. Graphically, the game nails the 16-bit aesthetic that it aims for, and it would be easy to mistake Blazing Chrome for either of the 16-bit Contra games if one did not know better. There are also some CRT filters for those who really want to recapture that retro feel. The music is also well done and features many rockin’ tracks that remind me of the music from The Terminator on Sega CD. The music that plays during the ending credits is also a tribute to rock/pop music from the 80s that I’m sure the game’s target audience will enjoy.

Blazing Chrome is an excellent throwback to the games it pays homage to, and it is an easy recommendation for those who enjoy classic run ‘n gun action games. It can be found on most digital distribution platforms for a price of $16.99 and is also currently available to Xbox Game Pass subscribers. There is no physical release yet, but a Limited Run edition should be in the works. Grab a friend and get ready to shoot some robots!