Grid game director Chris Smith chats with IGN about the resurrection of a true fan-favourite.

Codemasters has been building and publishing games for over 30 years. Platformers and puzzle games, shooters and sports sims; you name it. These days, however, it’s racing that exclusively powers the pistons in the studio’s high-octane heart.

It’s a genre Codemasters knows inside and out. The company’s current F1 series is the best simulation of a single, contemporary motorsport available, and Dirt Rally 2.0 is the supreme rally sim of the modern era. But there’s a third pillar of the Codemasters racing roster that’s been completely absent this generation – one that can trace its roots all the way back to 1997’s legendary TOCA Touring Car Championship: the much-loved Grid series.

The good news? Grid is back.

“Before my time, when I came in, there was a real desire to do this,” says game director Chris Smith. “Grid’s been one of those franchises that I think people want back; I mean, that’s obviously why we’re making it.”

“When I came in I had a long debrief with Clive [Moody], our VP for game development. We had a long chat over a series of days about what Grid meant to the company, what it meant to the fans, and what it means to bring it back. We had a lot of conversations on why it should be brought back, and how it should be brought back. One desire we have is to reset to the Grid that everyone wanted, which we believe is a reboot of the original… and stabilise its personality.”

Since 2008 the Grid series has been wrestling a little with its identity. The first Race Driver: Grid was a bit of a sidestep from what Codemasters had achieved with the fabulous TOCA Race Driver 3 back during the PS2/Xbox era, but it was one that earnt wide acclaim for its furious and fun racing. 2013’s Grid 2 retained that aggressive brand of action but shed some of the original’s depth, with slightly more shallow handling and – controversially – no cabin view. Grid Autosport, released just one year after Grid 2, was a return to form that recaptured some of that crucial TOCA mojo but it arrived extremely late in an already protracted generation. 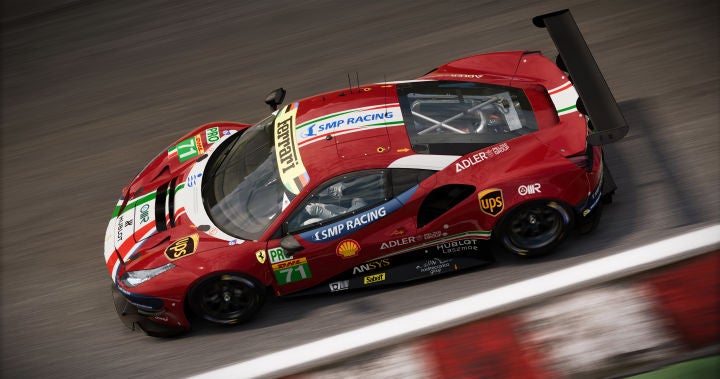 Ferrari now features in this year’s Grid, as does Porsche.

After combing through the reactions to each of the Grid games the decision was made to craft something primarily inspired by the original 2008 crowd-pleaser.

“It’s not that we didn’t look to the two afterwards,” says Smith. “We didn’t ignore those; there are good parts to both.”

“You look back on the original Grid and universally the reviews are, ‘Wow, this is so unique, this is so fresh.’ And people still refer to it to this day. Grid 2, there’s good parts to 2, and there’s parts where people didn’t think the handling was deep enough. [Grid: Autosport]; I actually love Autosport. I’m a big fan.”

Watching 2019’s Grid in action for the first time the DNA of the original is instantly evident. There’s the obvious stuff, from the returning San Francisco track to the franchise’s familiar font, but the racing itself is also unmistakably Codemasters at work. Even without the clear visual cues that give it away as a Codemasters game I doubt I would have guessed it was anything but a long-overdue Grid game for the current generation.

Smith describes the handling as the most essential piece of Grid 2019’s puzzle and the first thing the team tackled, prioritising a consistent experience and a good sense of weight and stability. There’s nuance baked into each car class that makes them require different things from a driver depending on the strengths of the vehicle, but beneath it all will be a core Grid feel.

“They do need to have differences but at their core what we want is that there’s a core Grid handling that feels familiar no matter the car or the class that you’re driving,” says Smith. “That’s really important.”

These VW pocket rockets are going to require a slightly different approach than a stock car.

That Codemasters is making a concerted effort to ensure the cars of Grid feel great out on track is hardly surprising, though. What’s more captivating is what going on with the AI.

Grid will arrive with 400 named AI drivers, and 72 of those drivers will be selectable by the player as teammates – something that’s been a part of Grid games in the past. Teammates are one of the three personality types in the game, alongside rivals and nemeses. Rivals are tagged as racers who’ve finished just above you more than once or, if you finished first, the driver who finished in second. A nemesis is a driver you’ve had a big clash on track with, and you can apparently create up to five nemeses per race.

Each AI driver has a specific aggression level, skill level, overtake ability, and a level of tolerance regarding how quickly a player’s actions can trigger them to become a nemesis. The 72 selectable potential teammate drivers will also have a unique loyalty rating, which is what makes them selectable as teammates in the first place.

You can have a guy that hates your guts but is a great driver and helps your team score, or a guy who’s not a very good driver but does everything you tell him to

These personality types dictate how drivers race, specifically around you, and they also act as modifiers to your Racecraft score – Grid’s scoring system. Based on what skills you perform and how well you drive and race, Racecraft scores are what will propel you up through the ranks. Right now scoring against teammates, rivals, and nemeses nets double points, but Smith notes it’s still being tuned.

“[Teammates] may even start as a nemesis,” says Smith. “They may absolutely hate you but you pick them. You can have a guy that hates your guts but is a great driver and helps your team score, or a guy who’s not a very good driver but does everything you tell him to. These are stories.”

Nemeses are the only AI type who’ll make deliberate contact with you outside of normal racing incidents, and they’ll also get a boost to their driving skill because they’re so eager to catch up with you.

“Don’t worry; they’re not going to PIT you every five seconds,” says Smith. “That’s something we’re obviously looking out for.”

Smith adds Grid’s Flashback mechanic is returning and will be there if anything ever seems particularly unjust.

Or if, you know, you don’t quite stick the landing.

“We always talk about Grid as rubbing is racing,” says Smith, explaining they’re aiming for something 70 to 80 per cent realistic, with a 20 to 30 per cent hyper-realistic twist.

“What we want is this game to be as fun for you to finish first as it is to finish in 13th place and go, ‘Well, I didn’t finish first but my god was that a fun race!’ To have the AIs battle each other; to have two abreast, to have three abreast. To see them fighting each other and not you. You’re not the centre of the world; you’re in the race racing other drivers.

“It’s not easy to do but we’re seeing the results of it now and we’re getting the payoff.”

Grid will feature 12 racing locations, with a mix of real and fantasy tracks. Some are returning spots from previous Grid games, and some are fresh (China’s Zhejiang Circuit, for instance, was still a pile of dirt when Grid: Autosport was released). Australia’s Sydney Motorsport Park (still better known as Eastern Creek and current home of the World Time Attack Challenge) returns to a Codemasters racer for the first time since 2006’s TOCA Race Driver 3.

In terms of vehicles, Grid is promising an eclectic array of classic and modern touring cars (I spotted Chaz Mostert’s 2018 Supercheap Auto Falcon during the demo), stock cars (including muscle cars, pro trucks, and oval racers), tuners (including World Time Attack), GT cars, Group 7 cars, and prototypes, amongst others. Fernando Alonso’s championship-winning Renault R26 will also star in Grid (alongside Alonso himself, who is consulting with Codemasters on Grid and will feature in the game as a high-level opponent with his own list of challenges).

It was extra promising to hear that the cars don’t necessarily start off in pristine condition.

“Cars start off grimy, with a few marks here and there,” says Smith. “We’re not about centrefold, pristine cars. Race cars, even if they’re new, have marks on them because they’ve been in trucks. At the starting line everything has a certain amount of marks and chips on it.”

“I’ve always been a big believer that the devil’s in the details, and we’ve put so many little subtle things in there, like the crowd reacting to an impact. Most of the time you don’t see it, but if you do happen to crash and catch it once in a hundred races, it’s gonna feel real. It’s gonna tell a story. I hate crowds that just stand around, because again it’s kinda like the detail on the cars; that’s not what happens at racing.”

Smith points out the crowd recoiling at the sight of a Mustang spearing into a concrete wall; it’s a great little flourish and one that helps bring life to the tracks.

While the hardcore Assetto Corsa Competizione is just around the corner and Codemasters’ own F1 2019 is destined for an earlier-than-usual release next month, the second half of 2019 is looking unusually quiet in terms of racing games.

“It’s genuinely pure luck, I’ll be honest with you,” says Smith, who previously worked at Playground Games during Forza Horizon 4’s development. “Because who would know that, as far as I know – and I’m not in the company anymore so I don’t know; I’m speculating – I haven’t heard an announcement for Forza Motorsport yet. And they’ve never missed a double year.”

“We planned that we would probably be out before a traditional [Forza] Motorsport would be out and we feel we’re different enough. If they don’t come out this year, that’s great for us; that’ll help us. I mean, I’m just gonna straight up say that. But we’re confident in what we’re putting out that, even if [Forza] Motorsport had been coming out, this would appeal to a bunch of gamers that [Forza] Motorsport doesn’t, but also to that group. Plus, we’ve got the advantage that we’re on all consoles, PlayStation, Xbox, PC – so that’s good.”

More than anything, Smith is hopeful that players simply have fun enjoying the Grid brand of on-track action: fierce pack racing, chunky collisions, and handling that straddles the line between simulation-style demands and arcade-like grip.

“It sounds cheesy but I want everyone to have fun,” says Smith. “I want them to talk about the races they’ve had. If they start talking about motor racing stories that were generated in Grid and are having fun whether they play it for 10 minutes or 10 hours, then we’ve done well. I want the most casual arcade person to the most hardcore sim player to come together and just talk about the fun they’ve had playing Grid and the stories they’ve created. And I think if we do that – if we create a product that is just at its core, on the track, 100 per cent fun – we’ve done well.

Luke is Games Editor at IGN’s Sydney office and he’ll talk TOCA all day if you let him. You can find him on Twitter every few days @MrLukeReilly.