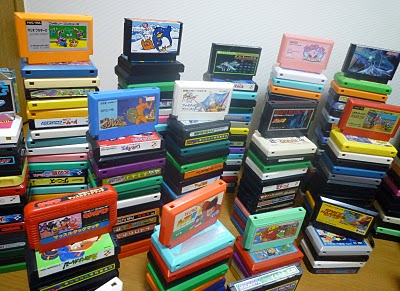 As I mentioned in my last post, a seller on Yahoo Auctions has been putting up an amazing collection of CIB Famicom games with low starting bids.  In fact he seems to be putting an almost complete set (over 1,000 games according to him and he has put up 600 different ones so far) – all CIB and all in nice condition.

Since an opportunity like this only comes once in a while, I thought this would provide a useful bit of information to record – just how much are all of these games, being auctioned at (almost) the same time in almost the same condition by the same guy going for?

While one sale isn`t enough information to form the basis for a price guide, at least this will give us a hint of what these games are roughly worth – virtually all the games got a fair amount of bidding so we know there weren`t any expensive ones going for unrealistically low prices, while at the same time the low starting bids meant no unrealistically high prices set by the seller (though of course that doesn`t mean everyone was bidding rationally).

The seller hasn`t quite been selling them all at once, in the first round he auctioned off 300 (and has a second round of 300 which will finish next week).  The first round finished last night and these are the games which sold for over 5000 yen, which accounted for 88 out of the 300.  I cut them off at 5000 yen partly to save myself some time and partly because the more expensive ones, having gotten the most bids and most attention from buyers, probably went for prices closer to their actual value.

I have listed these below, in order from most to least expensive.  The values are in Yen and do not include shipping (which would have added 164 or 510 yen depending on the method of shipping chosen).  To get a rough idea of the value in US $, the exchange rate at the time of the auction was about 115 Yen to the Dollar.

All games are CIB and, while I didn`t closely look at all the pictures, the ones I did inspect were all in very good condition.  Some of them were sold as new or never used, these are marked with `New` after the price.

There are a few interesting things.  The most expensive game was Summer Carnival Recca at 104800 yen, almost one thousand dollars.  Battle Formula, another rarity, was a close second and the only other one to breach the 100,000 Yen barrier.  Taking third place was a game I had never heard of for the Datach called Battle Rush, which apparently is also quite hard to find CIB.  Kung Fu (the scarce variant of Spartan X), Snow Bros and Lickle all got over 50,000, which isn`t surprising as they are all quite hard to find.

One game that did surprise me was #10, Double Dragon which sold for a whopping 36100 Yen.  That is a great game but by no means is it rare (though CIB copies in nice shape are a bit hard to come by).  It seems totally out of place wedged in between Adventure Island 4 and Moon Crystal, both of which are extremely hard to find.  I have seen slightly worn copies selling at Mandarake for about 1/10th that price.

There are a few other super common games that made the list – Dragon Ball Shinryuu no Nazo, Kakefu Kun and Saint Seya Goukin Densetsu seem completely out of place on a valuable game list but they were all new which might explain it (though I still think they went for too much). Mitsume ga Toru, a hard to find and very popular game, also seems out of place right next to Milon no Daibouken, which is a good game but extremely common.

There don`t seem to have been any steals among the games on this list (the ones that went under 5,000 yen were mostly unsurprising too).  Kage and Taiku no Gen San seem a bit lower on the list than I think they deserve, but the prices paid for them aren`t much different from what they go for in shops.

I`ll update this again next week when round 2 of the sale finishes.